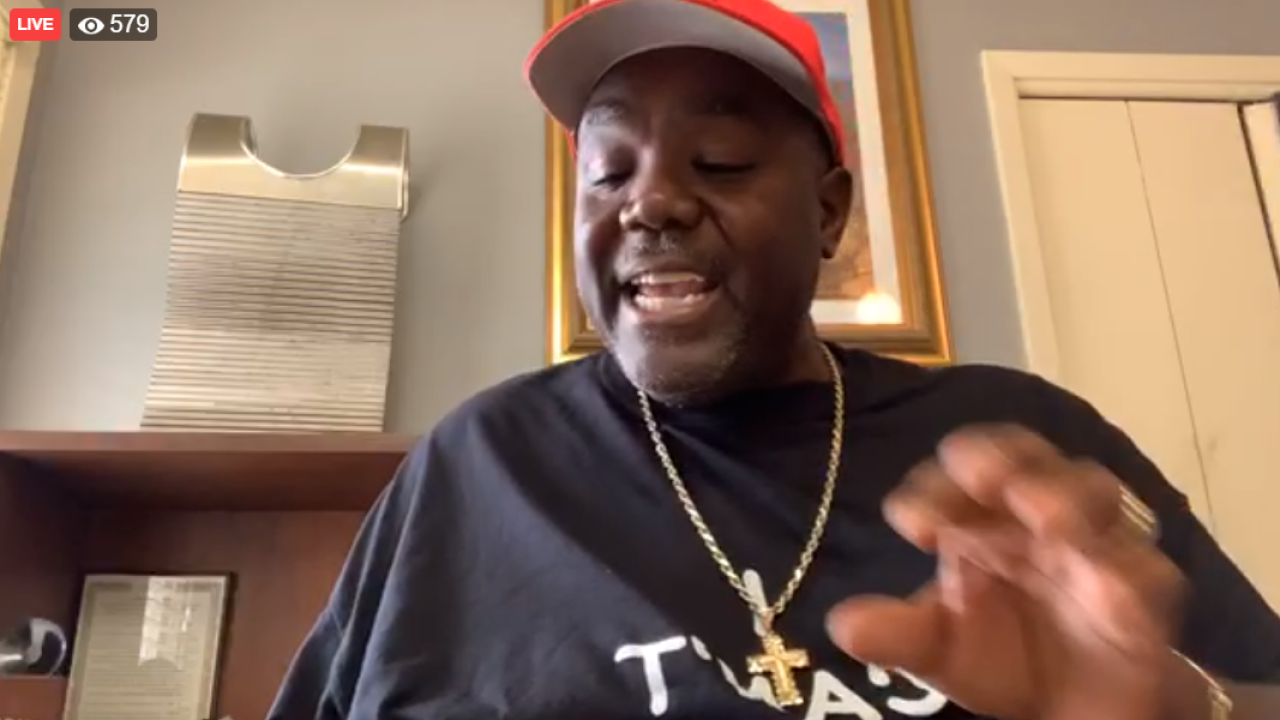 Former City-Parish Councilman Kenneth Boudreaux had Carlos Harvin on his radio show Sunday, and the men sparred over recent developments.

In his closing of the show, Boudreaux said that the show displayed someone "shucking and jiving" and said that some comments require "response."

"This is not the end, there will be more to come," Boudreaux said.

Harvin, the Chief of Minority Affairs for Mayor-President Josh Guillory, spent more than 90 minutes responding to questions from Boudreaux about the closure of four rec centers on the Northside, alleged city budget shortfalls, the needs of the African American community and his recent pay raise. To see the Facebook live of the show, scroll down.

Harvin was one of the candidates who ran against Guillory for the MP post, did not endorse anyone in the runoff but did have his picture taken with Guillory for a run-off mailer. Harvin then was hired as Chief of Minority Affairs. In the proposed budget that Guillory presented to the council last week, Harvin was given a $10,000 raise, records show.

At that same time, Guillory says LCG has to close four recreation centers, all on the Northside, because the main government has been "subsidizing" one of its own department's operations, the Parks and Recreation Department.

To read our stories about that, click here, here and here.

Harvin told Boudreaux that Guillory did not tell him about the closure before he made his video announcing it and posting it on social media.

"I found out when you found out," Harvin said.

Harvin said he got a text from Guillory, apologizing for not advising him first, and for not "running it past me."

Harvin said he sees his job as "building bridges," and notes that while he can advise and urge, Guillory's decisions are his to make. Boudreaux asked how Harvin felt about Guillory not telling him about the closures ahead of time, pointing out that he's a "chief, not a peon."

"In that text, he acknowledged that he fell short," Harvin said. "And when I did finally speak with him, he said he was looking at numbers."

Boudreaux, who served several terms on the City-Parish Council, said he doesn't buy the claims of an alleged shortfall.

"He gave each director discretion on where to make the cuts, so he didn’t have to do it," Harvin said. "And he said he wasn't going to ask any department head to do anything he wouldn't do, so he cut his own department 25 percent."

"You’re getting a $10,000 raise, and we’re laying off people," Boudreaux said. "He led by example. What he did was sacrifice somebody for others to benefit. He took care of some folks."

Boudreaux pointed out that each of the centers is located in an area that voted for Guillory's opponent in last fall's election. We plotted the locations of the targeted centers onto a map published last fall by our media partners at The Advocate, which showed how voting broke down.

All four rec centers are located in precincts that voted for Guillory's opponent last fall:

Harvin said the recommendations to close those centers came from the Parks and Rec department, who looked at usage. But, Harvin says, the conversation has shifted.

Boudreaux said the shift happened because of the "whip ass" that came after Guillory announced his decision.

"That man didn’t stutter," Boudreaux said of Guillory, noting he's military trained and an attorney. "This man said and did exactly what he meant to say and wanted to do. When the backlash came, you started putting out statements. Your statements were not sufficient to satisfy the community’s demands."

But the community - not just the African American community, but the Lafayette community - stepped up to protest Guillory's plan, Boudreaux said.

"Everybody is in agreement but the administration," Boudreaux said.

Shortly after the closure announcement, the administration announced that two churches had stepped up to help fund operations at the rec centers. Boudreaux implied that those partnerships won't go forward when the pastors learn how detrimental they would be to the community.

Harvin said that all rec centers in the city and parish will eventually have to go to public-private partnerships to operate, repeating the claim that use of the general fund by an LCG department is a "subsidy."

KATC filed several public records requests in regards to Parks and Recreation. Despite “usage” of the parks from an official LCG press release and being mentioned by Carlos Harvin on this morning’s radio show as a reason for the cuts, records regarding usage still have not been produced by LCG.

On 7/9/20 we requested all documents, emails, text messages, physical letters, voicemails, memos, and other records from the Parish President’s Office , CAO’s Office , and Communications office concerning Gerald Boudreaux and/or the Parks and Recreation Office since January 1, 2020.

On 7/18/20 we requested documents that show the usage rates of the parks- any reports, memos, notes, correspondence of any sort, surveys, which reflect how many people utilize each park.

To date, regarding usage of the parks and recreation centers, all we received is a one-page chart that shows the rentals at each facility. That document shows one of the closed centers, the Heymann Center, has the second-highest rental rate of all the parks in Lafayette:

On the subject of salaries and Guillory's budget, KATC Investigates also has been looking into the numbers.

In the proposed budget, Josh Guillory proposes a nearly 3% budget cut in salaries for employees in the Mayor-President’s Office and the CAO’s Office when compared to the current budget. The reduction is the result of the elimination of one position in that office, and while most employees did not see an increase, several employees in this department saw a significant increase when comparing what they earned in 19-20 to 20-21. It’s not entirely clear because of the way the budget is prepared; most of the positions have been re-named and therefore don’t show increases year to year. Using public records that were requested from LCG, KATC was able to determine the largest increases were for the proposed Chief of Staff, Robert Benoit, and the Chief of Minority Affairs, Carlos Harvin. Both are listed as new positions in the proposed budget, but both positions are designated for current employees.

We have requested job descriptions of all of these positions from LCG and will update the story once they respond with those records.