One arrested after shots fired at rally; no injuries 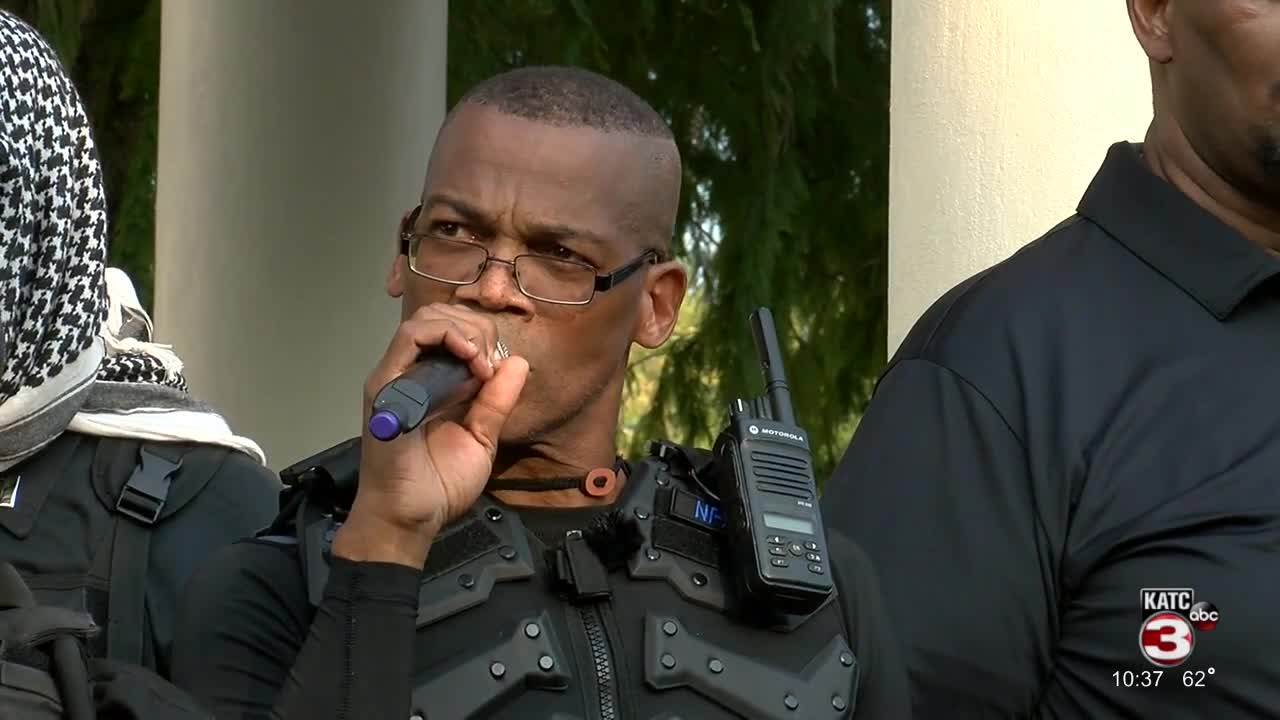 A recap of the NFAC march that happened in downtown Lafayette on October 3, 2020 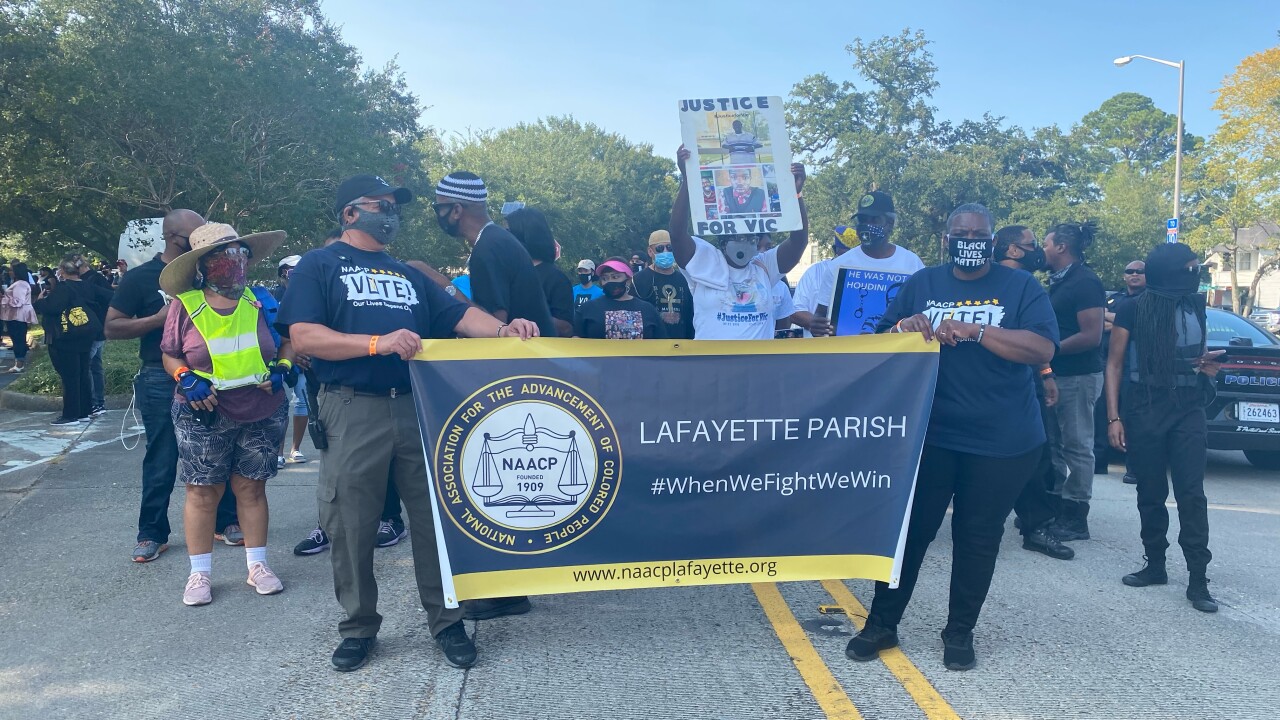 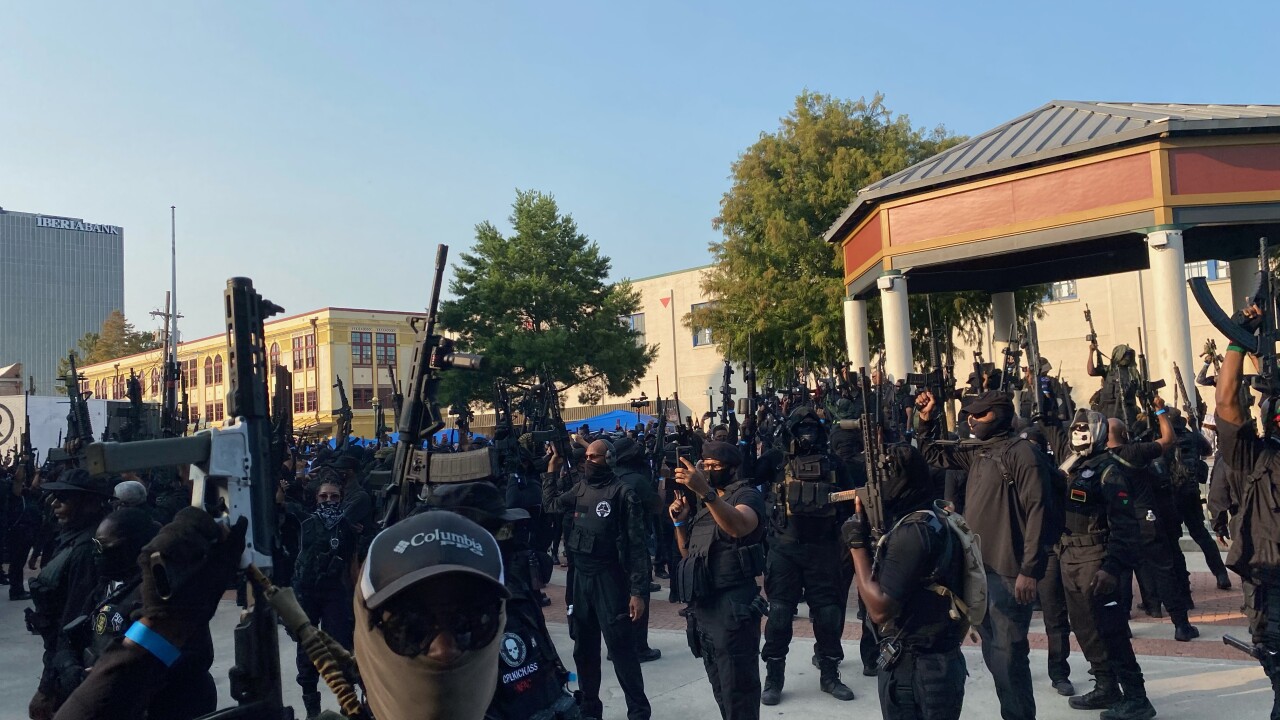 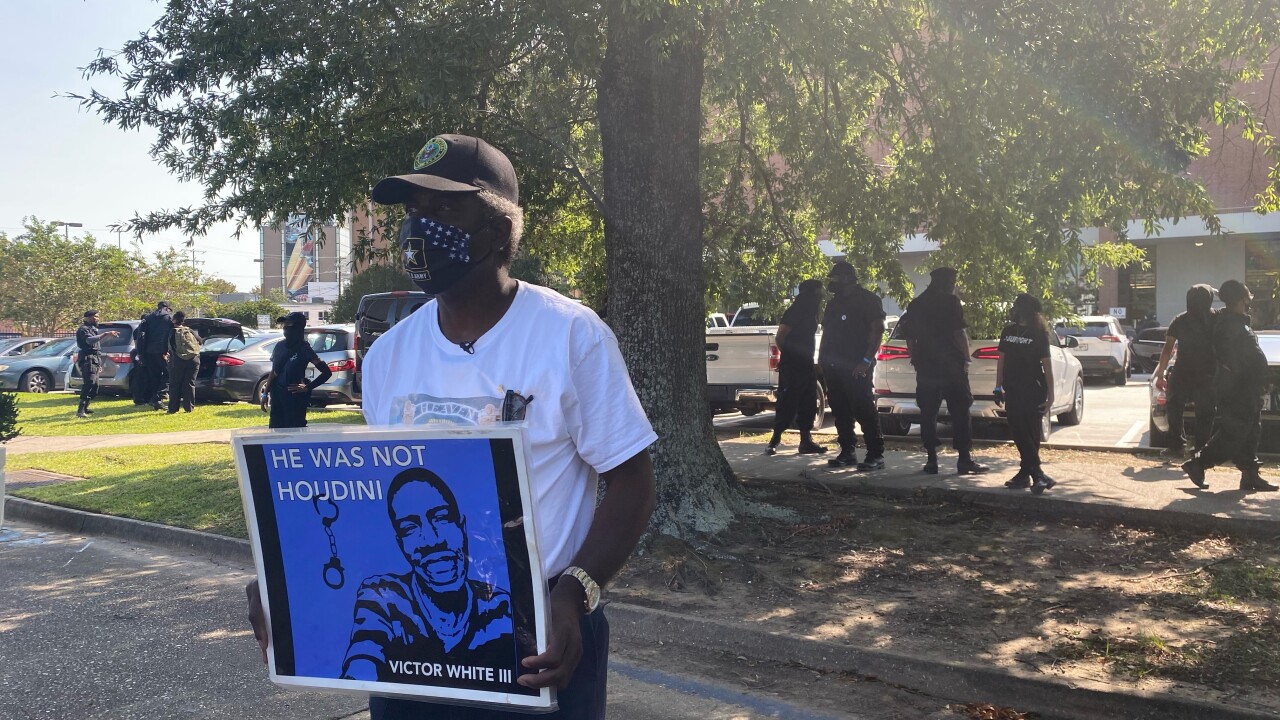 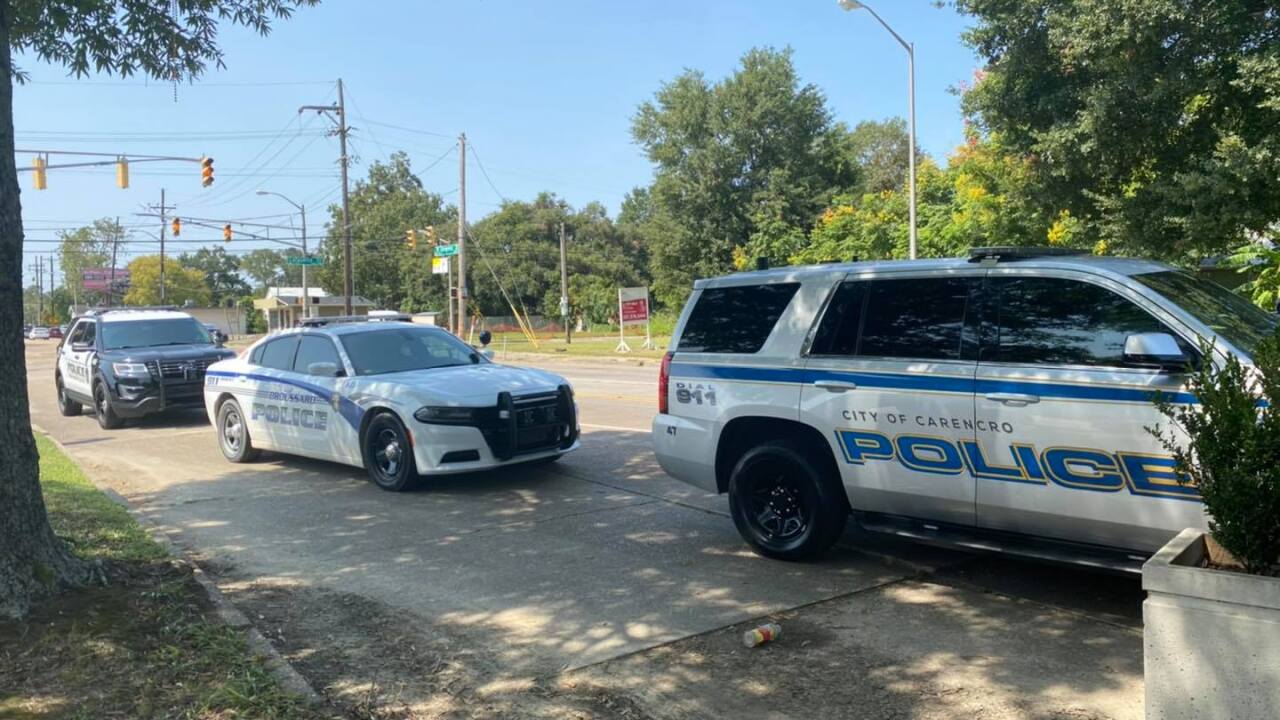 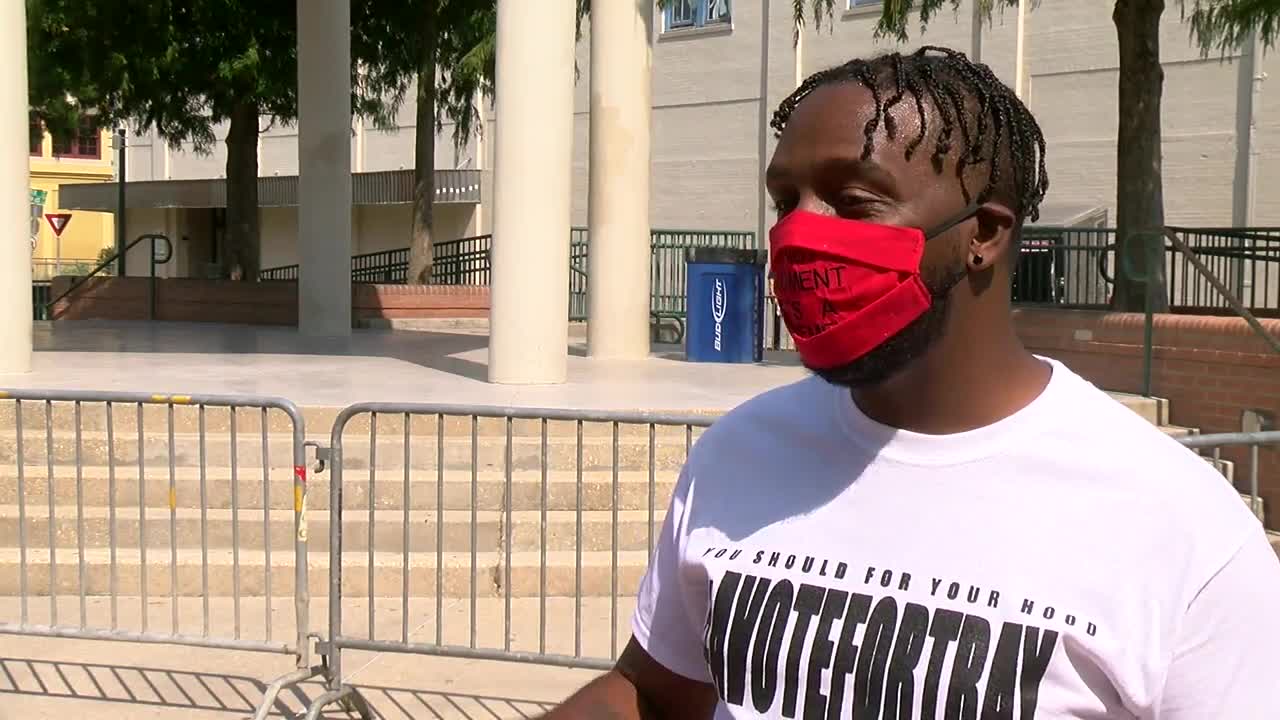 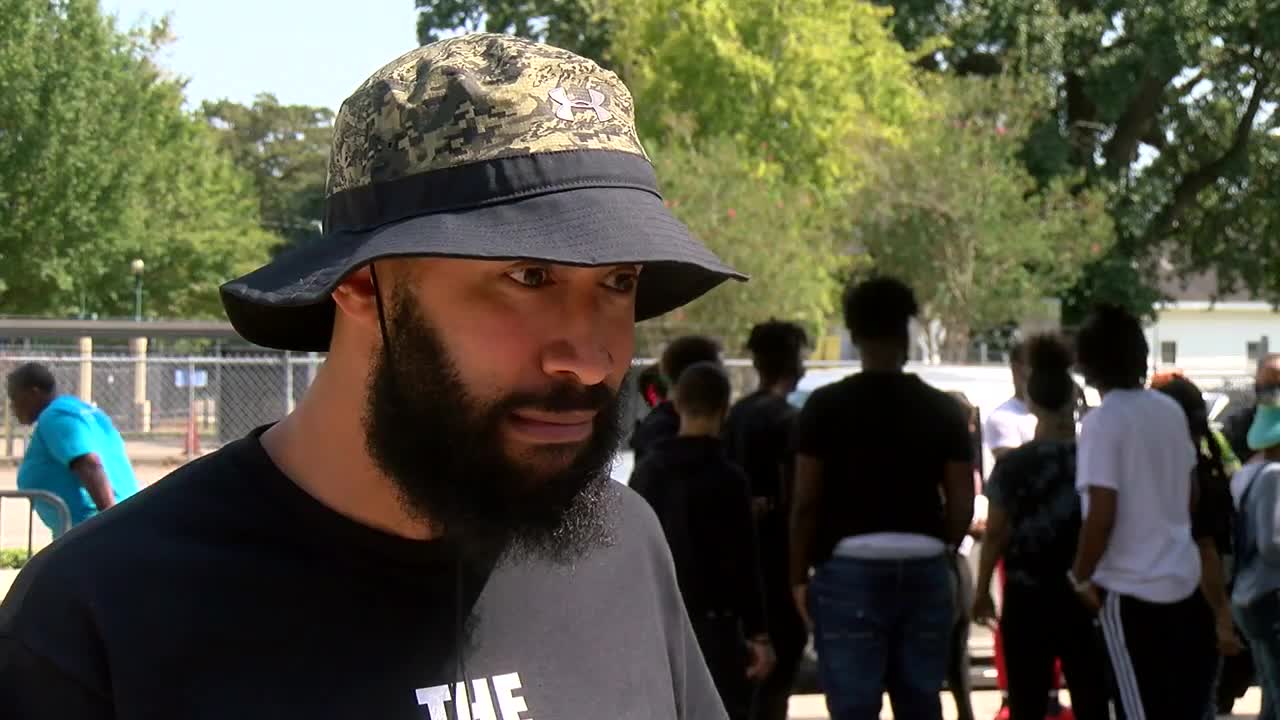 Watch the full rally below and scroll through wheel lead above for videos/photos from the rally.

Protesters gathered near the Lafayette Public Library and the march began shortly after 4 p.m. Around the start of the march, the sound of shots fired caused people to start running.

Shortly after, the Lafayette Parish Sheriff's Office reported that one person had been arrested in connection with the accidental discharge of a weapon at the rally. 26-year-old Terrance Jones of Lafayette is facing one charge of Reckless Discharge of a Firearm at a Parade or Demonstration and one charge of Felon in Possession of a Firearm, according to a spokesperson.

Another tense moment took place shortly after, as the group dropped to their knees, yelling, "Sniper," as they noticed what appeared to be law enforcement staged on top of the Iberia Bank meeting. They resumed their walk and were followed by the local chapter of the NAACP to meet a waiting crowd at Parc Sans Souci. There, several speakers took the stage, including Grandmaster Jay Johnson, a one-time presidential candidate and the leader of the NFAC.

"We came to stand in solidarity with the NAACP and all the other activist groups that are out here," Grandmaster Jay said. "Because it seems like any other time y'all try to protest, they want to do stuff to you. They want to tear gas you and hit you over the head. Isn't it strange that when we come out that doesn't happen? Nobody gets tear gassed. Nobody gets knocked over the head. I wonder why. You know why? Because you always look at power. We're power. Power respects power. And you all have the right to exercise the same power."

Protesters called for changes within the Lafayette Police Department, especially in light of the recent shooting death of Trayford Pellerin.

One moment not sitting well with many local residents was when LCG's Chief of Minority Affairs Carlos Harvin took the stage. As he spoke, several audience members started yelling, saying he was lying. At one point, members of the NFAC began to investigate because the calls for him to stop speaking were getting so heated.

In the end, the group asked for justice, called for people to vote, and for Lafayette to form its own chapter of the NFAC.

"I want y'all to be like them, be like us," said Grandmaster Jay. "Join up with us. Stand your ground. And when you see something messed up happening, don't just be a witness to it."

After the speakers, Grandmaster Jay called for the members of the NFAC to gather so they could exit the city. The event ended around 6:30 p.m.

After the rally, KATC spoke with one Lafayette native who said he's seen other protests around the nation get out of hand, but thinks the one held in Lafayette should be the model for others.

"Respect one another. It's been that way for a long time and it's not going to change anytime soon. But this is a start," said Ronald Broussard. "This is a demonstration of a start of how to get things done in a peaceful way."

Before the march, community activists from groups like The Village and the NAACP held a voter registration event at Parc Sans Souci. There was also music and free refreshments.

Davon Norman with The Village, said, "We believe that this is the most, probably the most historic election that we will see in our lifetimes, maybe possibly in the history of the country, and I think it's very important that everybody's involved in this process. So, yeah, we're definitely trying to get the word out there." He added that he "think[s] we're making some big statements in Lafayette."

Organizers hoped there was a good turnout among residents who live on the north side of the city.

Jamal Taylor, also with The Village, said the event was an effort to "advocate on the part of everybody in the community, be it white, Black, rainbow-colored, pink. We want to make sure that our community has a voice in this process. This isn't a dictatorship here in Lafayette. Our community is engaged now in this process, and we're going to continue to be."

Earlier this week, LPSO released a map of gun-free zones in the parish, which sets up a 1,000-foot buffer zone around schools in the city. LPSO said the zones are not new, and the permitted route for Saturday's parade complied with the firearm-free zone requirements.

A spokesperson with the department says LPSO is grateful that today's protest ended so peacefully.

"Overwhelming response of law enforcement where law enforcement was talking to all the groups that were in attendance," said Capt. John Mowell. "We definitely took our time, we were able to mix and talk to many of the people that were involved, people exercising their rights. We support that, we support peaceful protests."

The group says they made plans to come to Lafayette after Congressman Clay Higgins made threats against groups such as theirs, a threat Facebook took down almost immediately. Higgins reportedly told the group earlier this week that he would meet with them today, but changed his mind when they released a phone recording of their conversation. Higgins was not in attendance at the event, but one of his opponents in the upcoming race did speak out.

Higgins did post to Facebook Saturday afternoon, not referencing the protest, but instead showed an image of groceries bought at Rouse's, saying, "Headed to a BBQ with some cops. Veterans all. Army strong. Lafayette is nice, this time of year."