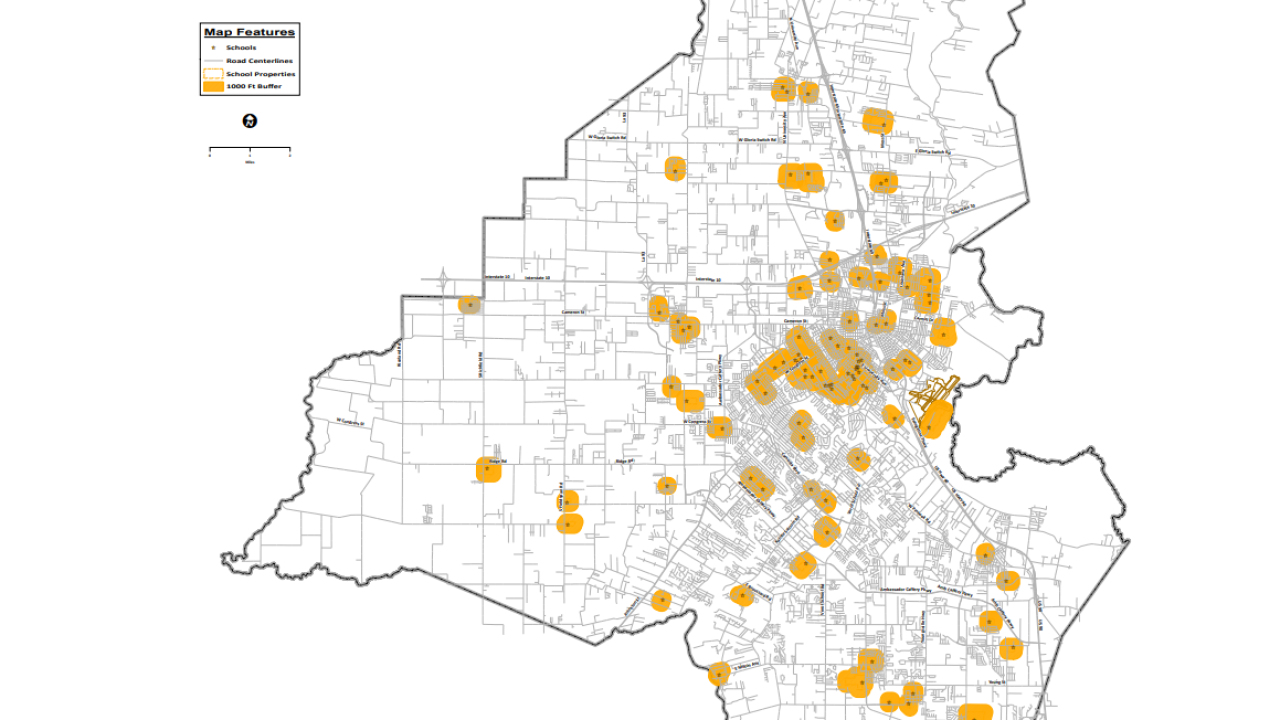 LAFAYETTE — In reference to a planned march by the NFAC on Saturday, October 3rd, the Lafayette Parish Sheriff’s Office has updated and filed a map of firearm-free zones with the clerk of court’s office.

An interactive map can be viewed here. The map can also be seen at the bottom of this story.

The sheriff's office says the permitted route for Saturday's event complies with the firearm-free zone requirements.

Before the release of the zoning map, Congressman Clay Higgins said he was "burning the olive branch" with the leadership of the NFAC. A month ago, Higgins posted a threat against the group on Facebook, which Facebook later removed. Higgins now says that he recognizes the NFAC's right to peacefully assemble and does not believe the assembly "carries any violent threat."

The map sets up a 1,000-foot buffer zone around schools across the city, which are designated as gun-free zones. But given previous armed protests in the city, it raises the question why it's only being enforced now.

On August 28, Kenneth Jenkins, a permitted security guard, along with two armed men in Hawaiian shirts known as the Boogooloo Boys, escorted protesters around Lafayette.

"We weren't aware of any type of zone that we couldn't do anything in. The cops were like, 'you're good,' so we're good," said Jenkins, who said his job was "to make sure nobody interferes with [the protesters] as they use their amendment right to protest peacefully, since people are getting threats through social media. It was my job to make sure everything was done safely."

The protesters went on UL's campus, which is a gun-free zone according to state law.

"We waited right there on the sidewalk. The police pulled right in and watched us, making sure we weren't going in there," explained Jenkins.

According to the map issued by LPSO, the Boogooloo Boys were in violation and under law could be arrested. They're not alone. Days later, a group known as the Louisiana Cajun Militia was also in the gun-free zone - with guns.

"Cajun Militia, the Boogooloo Boys, we've all been in violation of the zone," Jenkins said. "So what is going on?"

We spoke with officials with the Lafayette Police Department and the Lafayette Parish Sheriff's Office, who said the gun-free zone law is clear. The officials declined to be on camera and neither would speak on past events. We also requested an interview with Lafayette Sheriff Mark Garber, who declined our request.

The NFAC does have a permit to march, but given the gun restrictions, the route for the march is still unclear.

A look at firearm-free zones can be viewed here