An upper low produced widespread rains and storms Sunday. Our skies remained gray, but on the bright side, temperatures held in the upper 70s over most areas. Rains will be more scattered today, and perhaps with a few breaks in the clouds, we’ll see temperatures reach the mid 80s. Heavier, and more widespread rains will be over the western sections with more widely scattered rains over the eastern half of Acadiana. Tuesday, rain chances will be slightly lower, but we’ll be watching Tropical Storm Gordon to see how it will impact our Wednesday and Thursday forecast.

Tropical Storm Gordon has formed near the southern tip of Florida. Winds associated with Gordon are near 45mph and rains are wrapping around the system with heavy downpours approaching the Florida Keys. Heavy rains will continue over south Florida during the day today. At this time upper level conditions only favor slow development. Because of the timing, the Tropical Storm Watch has been upgraded to a Tropical Storm WARNING from Morgan City to the Alabama/Florida state line. A new intensity and track forecast will be issued at 10am.

Gordon will slowly strengthen over the next 24 hours. It’s expected to continue on a west-northwest track entering the eastern Gulf of Mexico. Upper level conditions may become more favorable for development as it continues toward the northern Gulf Coast. Models are only showing the potential for this to become a modest tropical storm with winds near 60mph on Wednesday. Even with upper conditions more favorable, they’re still not great. The timing has this system reaching southeastern Louisiana sometime early Wednesday morning then crossing Louisiana from southeast to northwest bringing the potential for flooding rains, gusty winds, and some coastal flooding. Gordon could make landfall as far west as Morgan City or as far east as Pensacola during the day Wednesday. The latest RPM model keeps the heaviest rainfall along the Mississippi Gulf Coast where over a foot of rain could fall. Models have considerably less over Acadiana. Even though this particular computer model run shows under an inch of rainfall, other models go as high as 5-7″ between now and Thursday, and these forecasts can change with only slight track movements east or west. 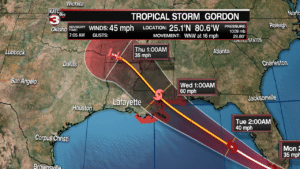 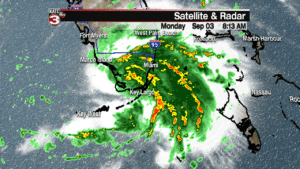 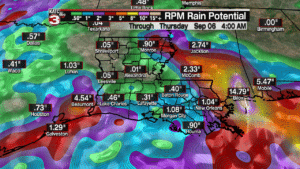 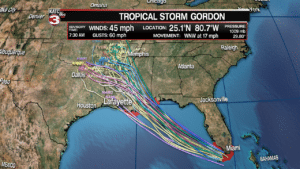 What you should be doing:

Continue to monitor the updates on Gordon from katc.com and other trustworthy sources. Don’t get caught up in social media hype and base your decisions on what you read in the comment sections. If the BBQ gets rained out today, this would be a time to move in or secure items around your house and yard due to gusty winds. If you are prone to flooding, especially in tidal flooding areas, this would be the time to move items, and create barriers (sandbags) to prevent any flooding. At this time there aren’t any indications this would be a system to prompt any evacuations for our area, and NO school systems have made any decisions on cancellations. Prepare for heavy rains, gusty winds, and some flooding between Wednesday and Thursday.