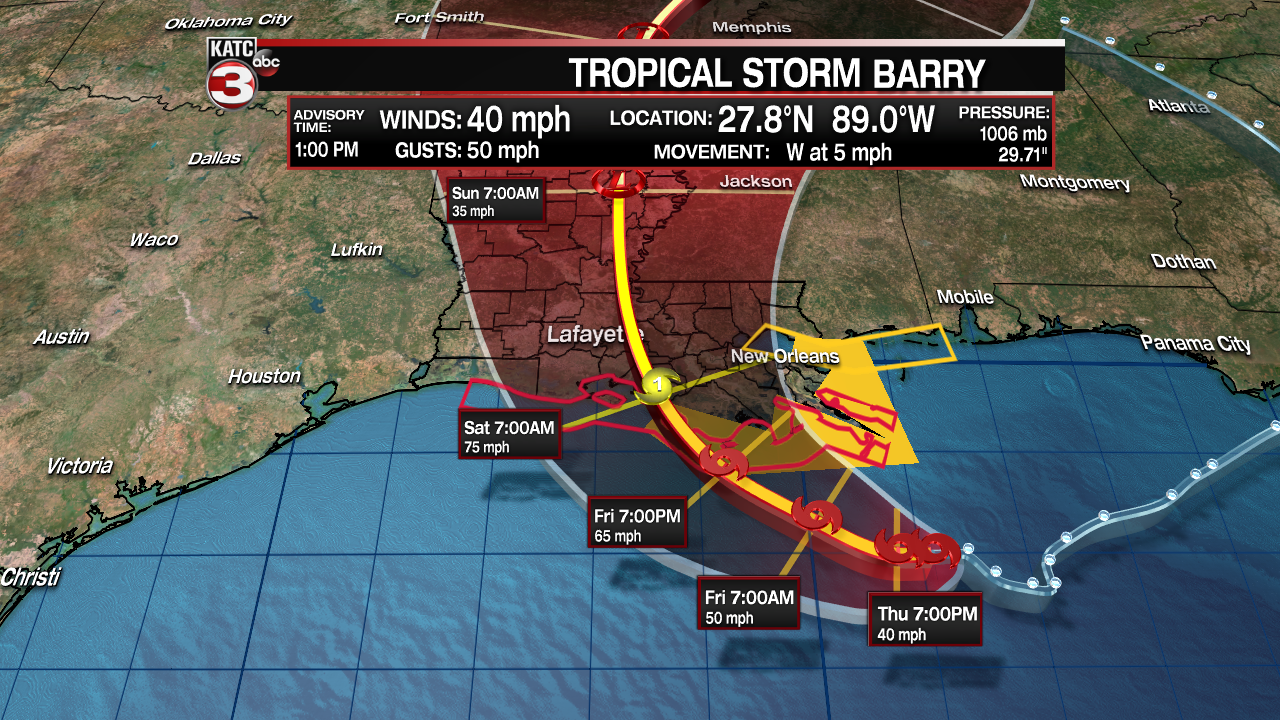 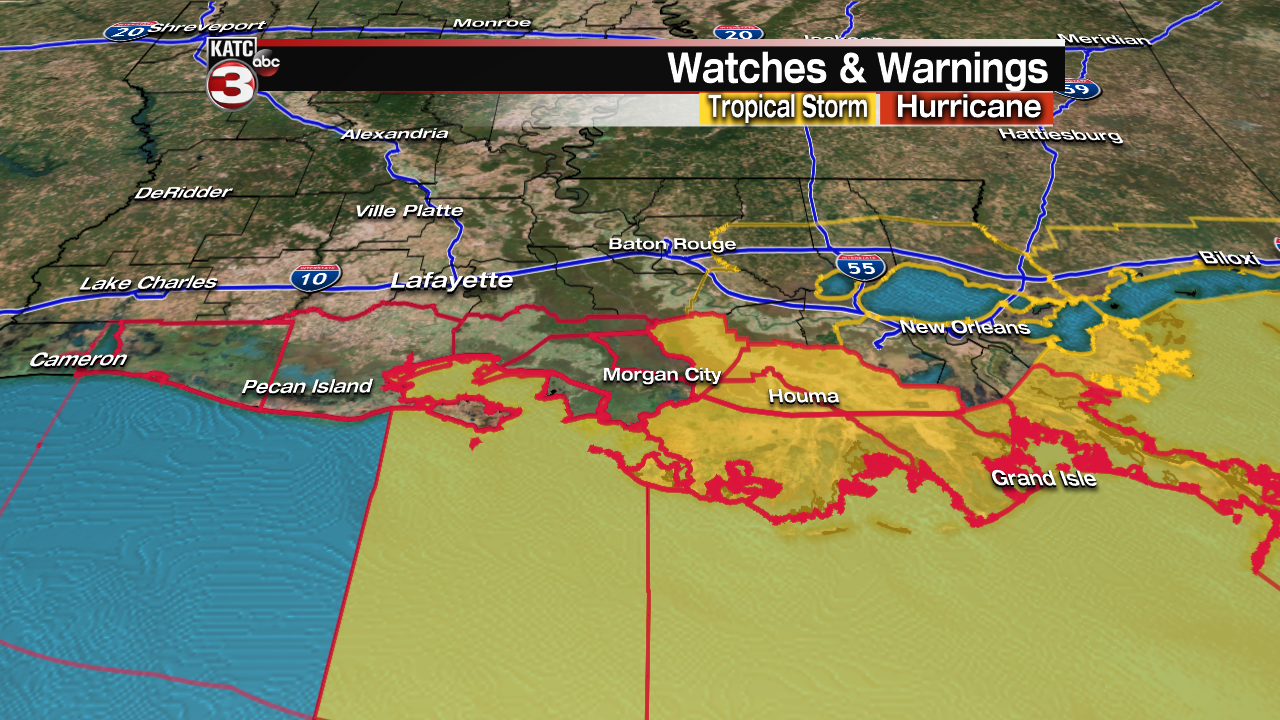 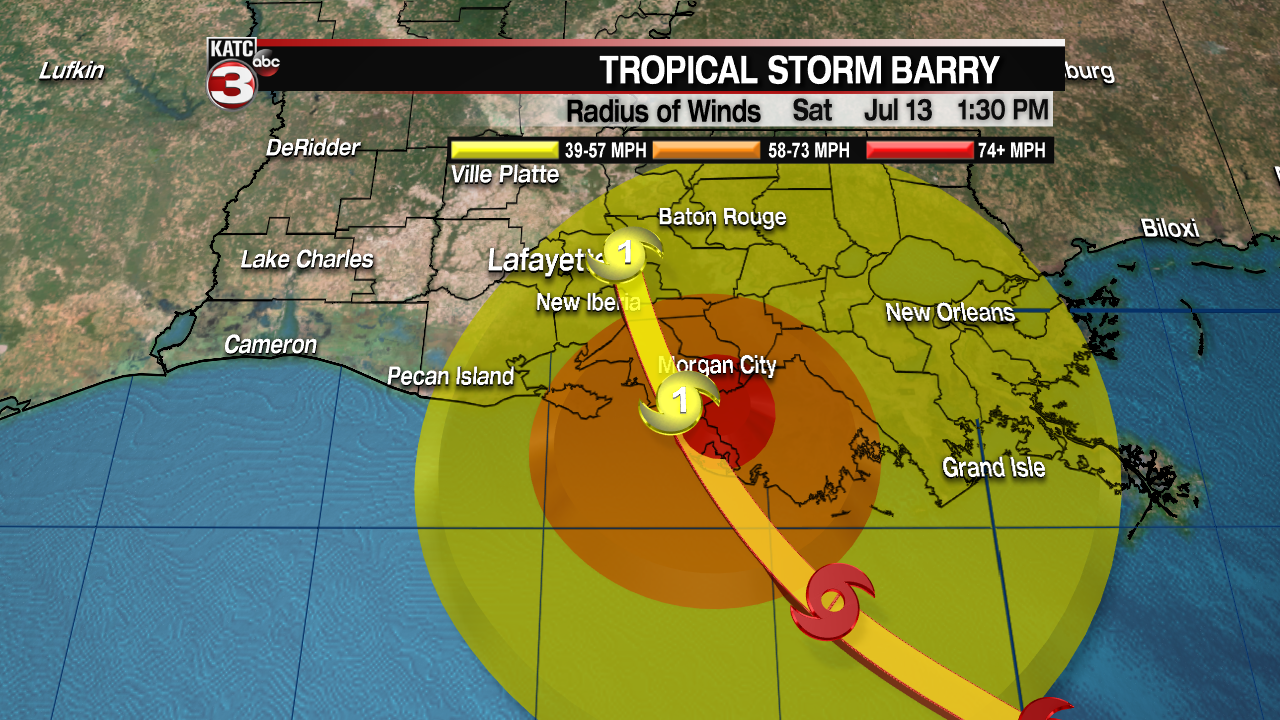 As of 10:00 am, Thursday Tropical Storm Barry became official with winds up to 40 mph and gusts up to 50 mph moving to the west at 5 mph.

The changes with this advisory is a slight speed up in the storm leading to a landfall that would be Saturday morning as opposed to Saturday afternoon, intensity at landfall is still expected to be at a category 1 storm.

Tropical Storm and Storm Surge Warning have now been issued from the St. Mary Parish border and areas to the south, those warning will likely expand later Thursday afternoon and should encompass the Acadiana coastline by Friday morning.

Not a whole lot of movement in the track which has stayed fairly consistent for a few runs now, but the cone of uncertainty is still a little large for only being a few days out so there's still some wiggle room for this storm track to change a little.

It appears as if the National Hurricane Center is still leaning heavily on the EURO output, and the latest GFS run seems to be an outlier so will leave that out of the discussion for now, now that there's a low we should start to see models gain in confidence.

The overnight EURO model run continues to bring a hurricane onshore along the St. Mary Parish coast on Saturday morning, the next round of model data will come in around 2:00 pm.

If this is the scenario that plays out the main swath of rain will be along the eastern edge of the Atchafalaya Basin producing 15-20" rains, and hotspots that could get as high as 25", Acadiana would likely see 6-12" area wide which would still produce flooding.

When looking at the EURO projection for rain totals try not to focus on individual numbers and look more where the heavy swath is located, it's worth pointing out as well that the worst of the rain is maybe 20-50 miles east so a minimal change in direction brings the heaviest rain over Acadiana. So be prepared for the worst.

While the center will be on the eastern edge of Acadiana the wind field will be more spread out so tropical storm force winds will spread through central Acadiana, and hurricane forced winds will likely be felt through Morgan City and around the center of the storm.

Tropical storm forced winds will arrive in St. Mary Parish Friday evening and spreading out through the night, with the worst of the wind coming during landfall Saturday and continuing through the day.

Storm surge will be a concern for coastal residents arriving Friday night and continuing as the storm moves north, residents along the coast need to be prepared for a storm surge of 6-8 ft near the center of the storm, closer to 4-6 ft away from the center.

This is the last full day you have to prepare your homes and families all preparations need to be completed by Friday morning as conditions will start to deteriorate Friday afternoon. While confidence is slowly growing with the forecast make sure that you stay on top of any changes. Small changes in the track can have big implications for impacts and as long as you're in the cone you are in the range of possibility.