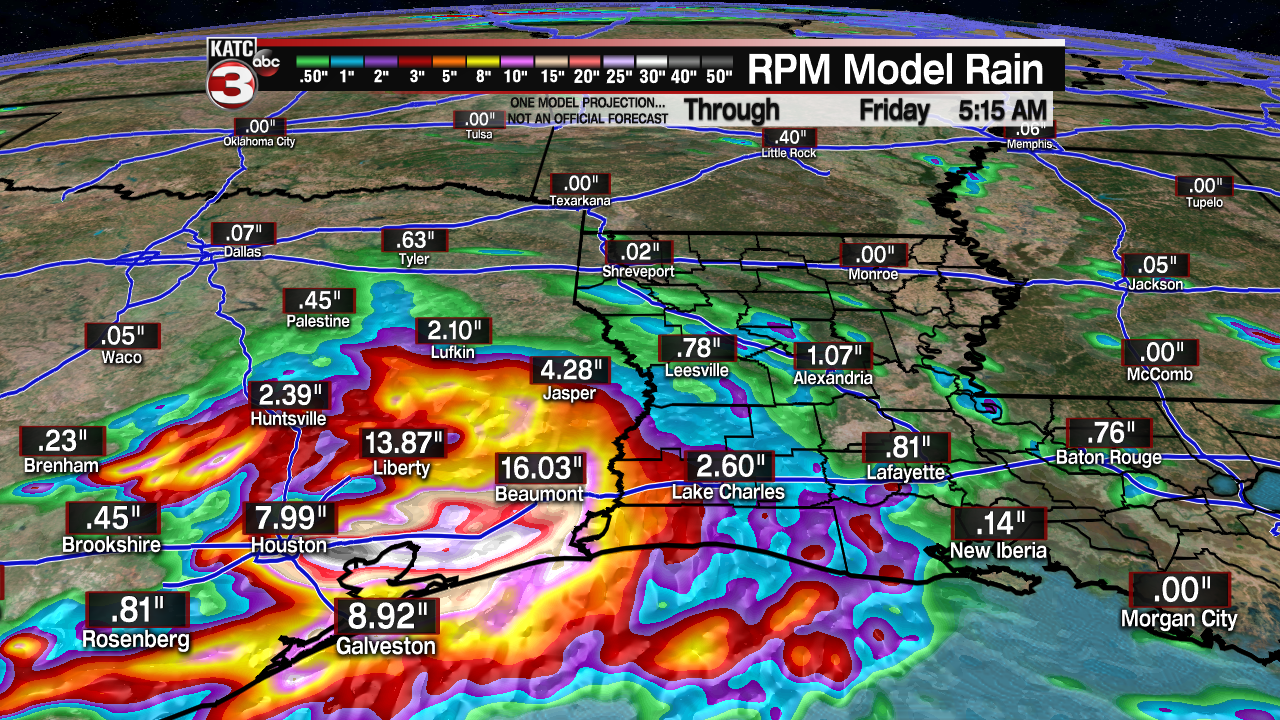 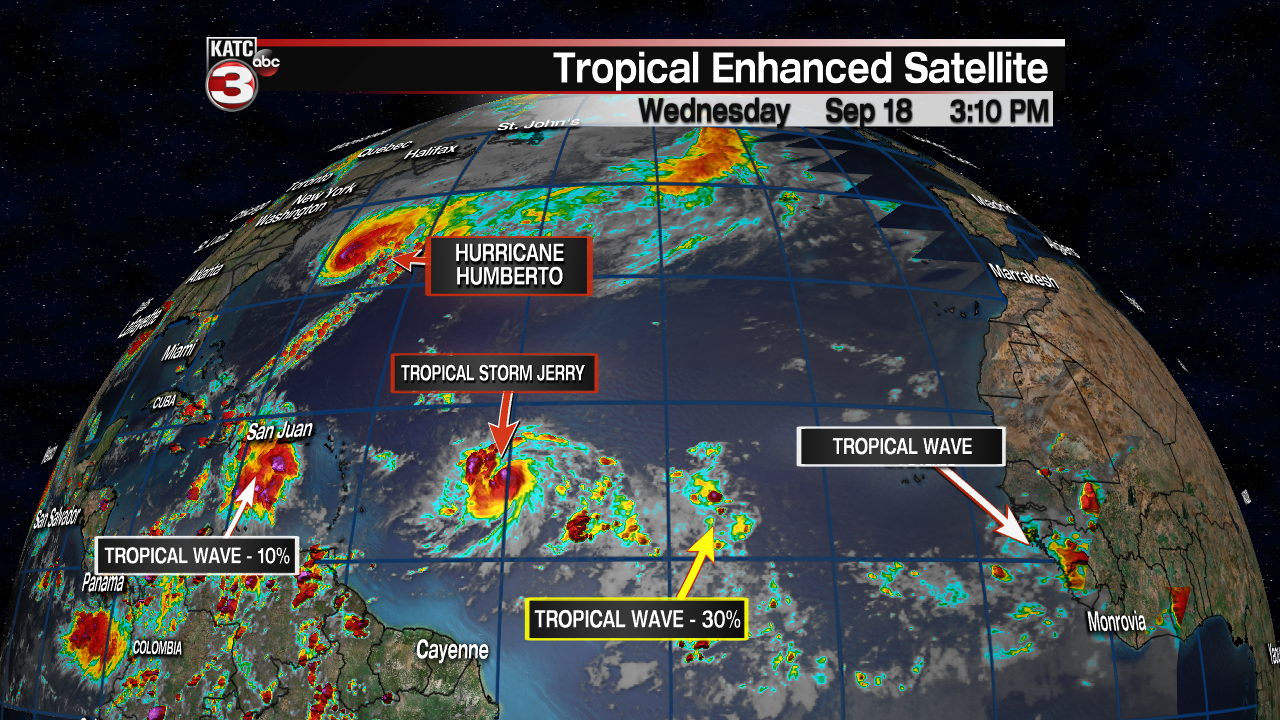 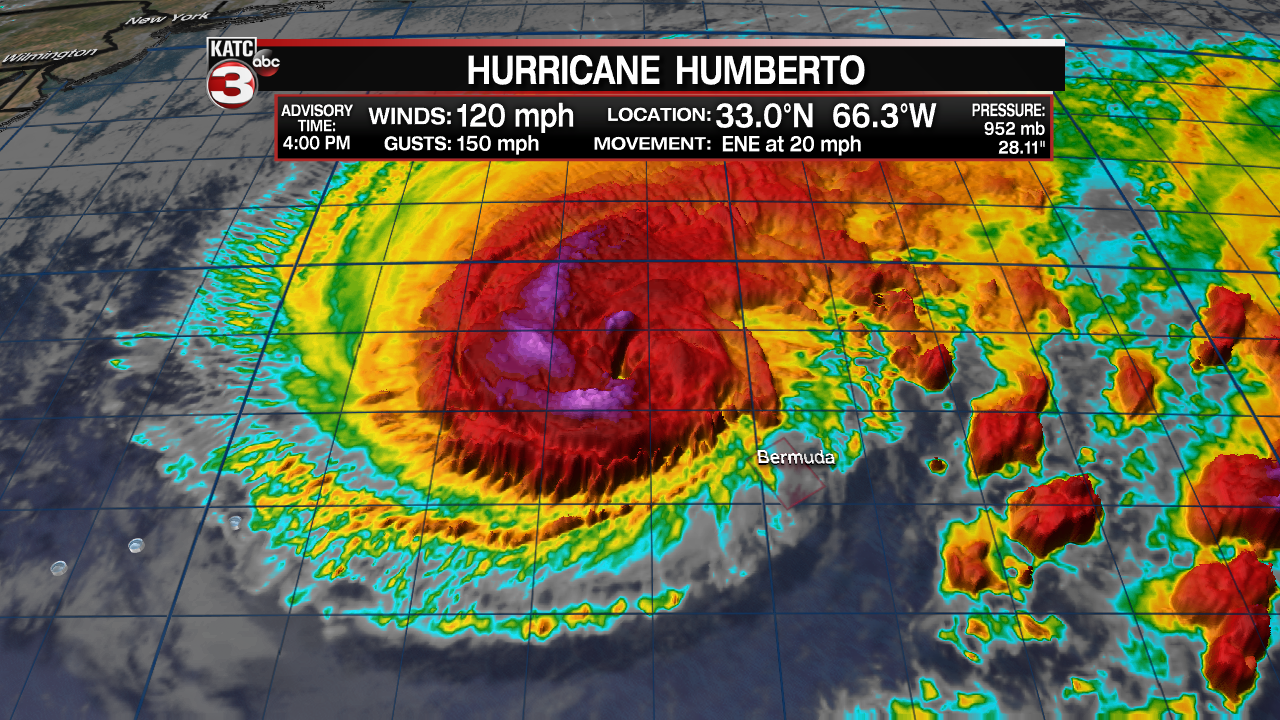 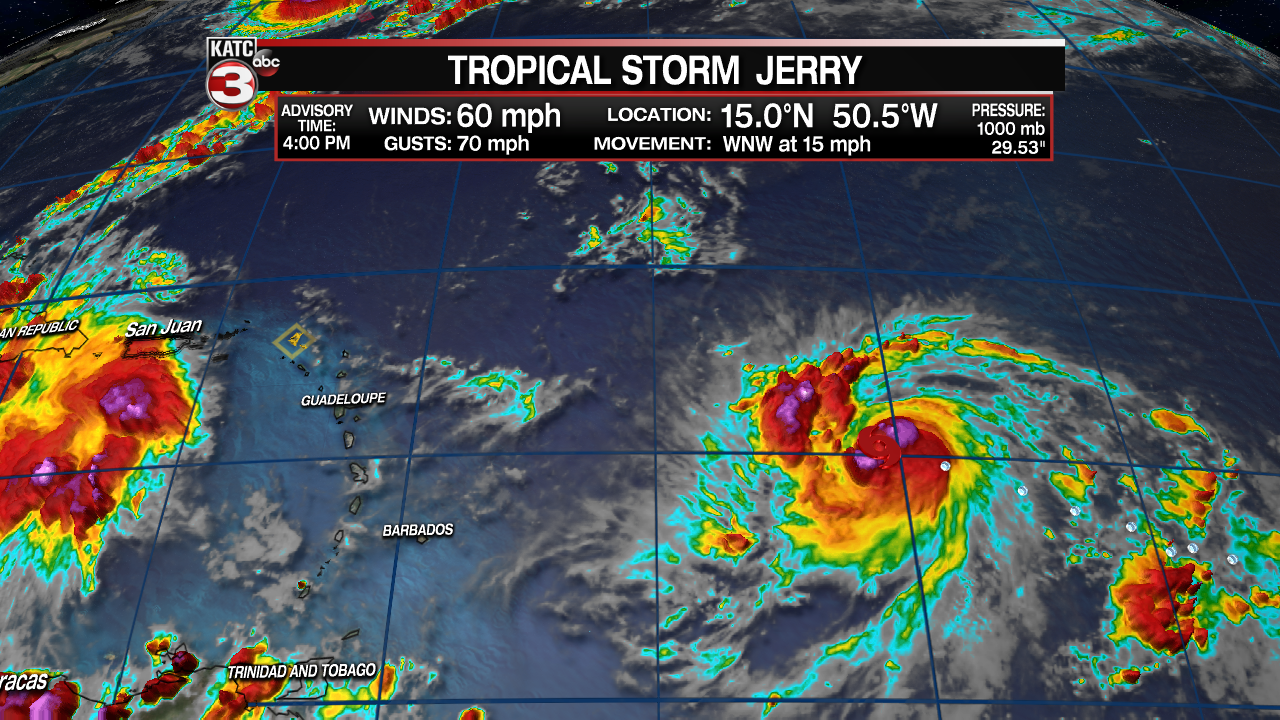 More tropical showers and thunderstorms associated with Tropical Depression Imelda remain in the forecast for Acadiana Thursday, but the threat of flooding rainfall should remained confined to Southeast Texas and perhaps into extreme Southwestern Louisiana.

Typical of inland tropical systems, tropical rain bands and storms spread out from Imelda's center (just south of Lufkin late Wednesday afternoon), through Acadiana with brief torrential downpours and locally gusty winds...but later Wednesday night into Thursday morning it is expected that storms will refocus and concentrate closer to the center in Southeast Texas, while locally, it should get quieter here.

Another process of storms spreading eastward into Acadiana will likely occur again Thursday, with rain chances remaining in the 60-70% range...with lower chances to the east, and higher chances likely to the west.

Meanwhile the threat of disastrous flooding will continue across Southeast Texas into Eastern Texas, and perhaps edging to extreme Western/Southwestern Louisiana through Friday. As of Wednesday afternoon already between 10-20" of rain has fallen in portions of Southeast Texas.

While models vary on where the heaviest rains will occur over the next couple of days, additional rains of 10-20" or more and flash flooding will be possible in spots anywhere from the Houston metro area eastward to the Louisiana Border...spreading farther northward into Friday.

Remember, the model forecast are computer projections...what happens in the real world is always vastly different, but the models continue to tell us the threat of severe flash flooding will be likely west of our area into Southeast and Eastern Texas through the end of the week.

Locally in Acadiana, expect up to an inch or two or rain or less with any storms Thursday, and less than that Friday.

Friday's rain chances should begin to decrease to near the 50% range.

Daytime high temperatures, due to the clouds and showers, will likely be capped in the mid-80s through Friday, but drier air and more sunshine, and consequently warmer temperatures are expected locally into the weekend.

Rain chances should decrease to 20% or less for Acadiana this weekend with daytime highs creeping back into the upper 80s to near 90.

Relatively dry weather is expected early next week before some tropical moisture creeps back into the area for mid-week and perhaps again for the following weekend. See the latest KATC 10 Day Forecast.

Meanwhile, the rest of the Atlantic tropics remains quite busy, with Hurricane Humberto and Tropical Storm Jerry churning away, and more candidate tropical waves emerging.

Major Hurricane Humberto will bring hurricane force winds to Bermuda early Wednesday evening and then will move out into the open Atlantic Thursday and weaken thereafter.

Tropical Depression 10 was upgraded to Tropical Storm Jerry Wednesday and is expected to become a hurricane Thursday and could threaten the extreme Northeastern Caribbean in a few days where Tropical Storm Watches were issued for parts of the Leeward Islands with the Wednesday 4 pm Hurricane Center advisory.

Jerry is expected to turn northward (hopefully) in the 4-5 day time frame and may also encounter a more hostile environment...but could also threaten Bermuda as "something" in the 6-7 day time-frame.

A tropical wave (10% chance of development next 5 days) in the Caribbean south of Puerto Rico looked a little better Wednesday on satellite imagery with this disturbance possibly reaching the Gulf of Mexico early to mid-next week...models do not develop this system...but they didn't either with what ultimately became Tropical Storm Imelda...

We could however, see a spike in our rain chances from this system by next Wednesday.

Another tropical wave in the mid-tropical Atlantic shows promise with currently a 30% chance of development over the next 5 days...prospects for further development thereafter look favorable.

And finally, another tropical wave about to emerge off of the African Coast may develop in about a week's time...the peak of hurricane season continues...and there could be more U.S. and perhaps Gulf threats coming well into October.