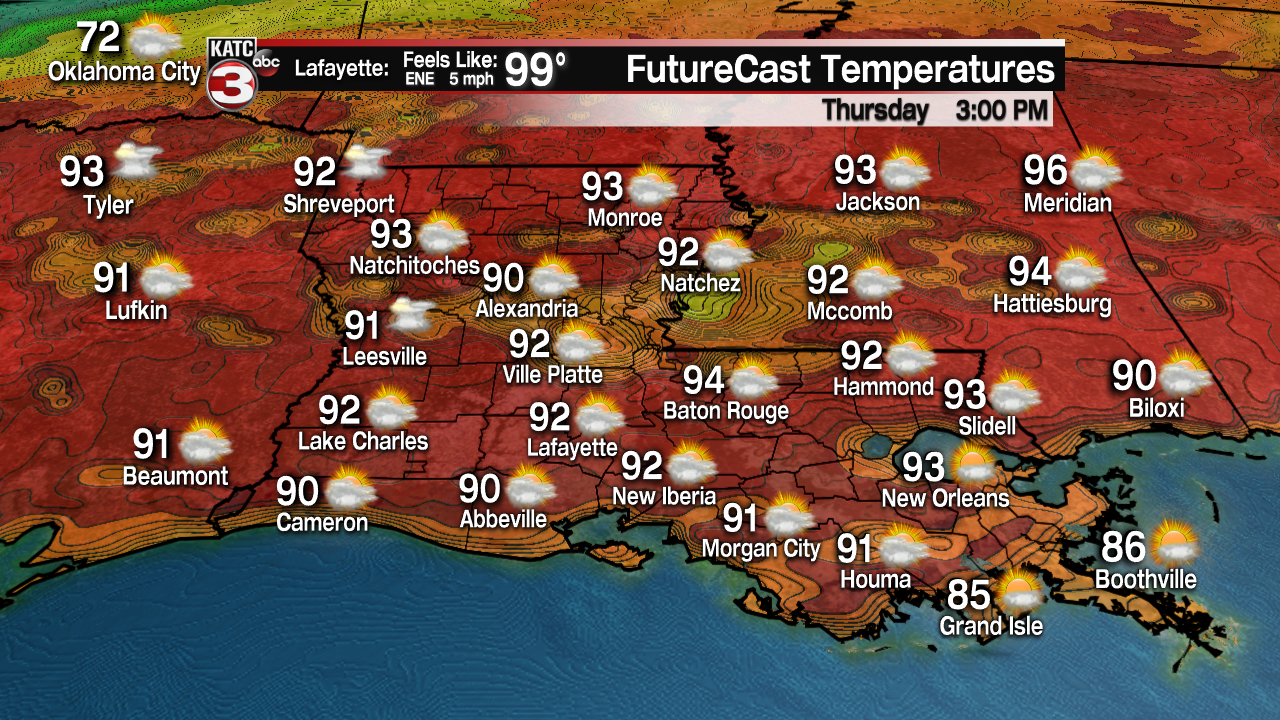 Before Acadiana's much-anticipated cool front arrives Monday, we will still have to deal with more summer heat into the weekend along with the risk of a few afternoon thundershowers.

Look for mostly sunny skies Thursday to give way to partly cloudy conditions in the afternoon with roughly a 20% chance of a few showers, possibly a thunderstorm during the latter part of the afternoon into the very early evening hours.

Temperatures Thursday will again top out in the 92-93 degree range with heat indices in the upper 90s to near 100 in a few spots.

Much of the same is expected Friday with highs in the low-mid 90s accompanied by a slightly better chance of late afternoon showers and storms, especially for northern portions of Acadiana as a weakening frontal boundary fizzles in the northern part of the state.

This weekend will bring more hot weather under fair to partly cloudy skies, with very slight rain chances Saturday (near 10-20%) and possibly a better chance of afternoon storms Sunday.

The big day for our area will be Monday as a cool front will bring clouds and a fairly good chance of scattered showers and a few embedded thunderstorms.

We are not expecting any severe weather with this cool front at this time.

Monday's highs should be confined to the mid-80s with significant cooling and breezy conditions likely developing into Monday night.

Behind the front, look for mostly sunny skies accompanied by some high level cirrus clouds from time to time, and very pleasant temperatures.

Unfortunately the cool air will likely moderate quickly Friday into teh following weekend with daytime highs climbing back into the mid-upper 80s along with a return of higher humidity for next weekend as well.

Meanwhile in the tropics, the former hurricane Lorenzo, after battering the Azores Wednesday, will be impacting the United Kingdom over the next couple of days as a formidable extratropical storm.

Upper-level winds are not conducive and development, if any, of this system is expected to be slow to occur while it moves to the west-northwest near the Yucatan peninsula in a day or so, and over the southern Gulf of Mexico by the weekend."

The NHC currently gives the weak area of low pressure a 10% chance of development over the next 5 days...but this feature may last well beyond that, perhaps 10 days or more where models continue to suggest lower than normal pressures will persist from the Southern Gulf of Mexico through the Northwest Caribbean.

Eventually, there could be another substantial system that emanates from this area, but we'll keep our fingers crossed for now and hope fronts begin to come with more regularity into the 2nd and 3rd weeks of this month for the sake of interests in the Gulf of Mexico.

Hilda was a Category 3 storm at landfall and was responsible for 38 deaths, including 22 people and injured 165 others by a tornado in Larose, LA.

Hilda also knocked down the Erath water tower killing 8 at the Town Hall below.

Lili was a Category 4 storm the day before landfall, and collapsed to a Category 1 overnight after passing over cooler water run-off along the coast from Tropical Storm Isidore the week before, and allowing dry air entrainment from the west to help weaken the storm that was sporting 145 mph winds 24 hours before landfall.

Lili produced numerous gusts to 100-115 mph in Acadiana especially associated with tornadoes and "gust-nadoes" from Vermilion into Lafayette and Acadia Parishes.

Lili left nearly all of Acadiana without power for up to several days...in some cases weeks. There were just 3 direct deaths in Louisiana associated with the storm by falling trees, one in Lafayette, and two people in Baton Rouge that had fled the Acadiana area from the storm.