A tropical pattern has set in across Acadiana over the last several days, with breezy winds tomorrow helping to take and edge off of the heat and humidity.

But as time wears on, the pattern will gradually get hotter, and eventually a little drier into the weekend an beyond.

In the near term, expect breezy, warm and humid conditions overnight into Tuesday. 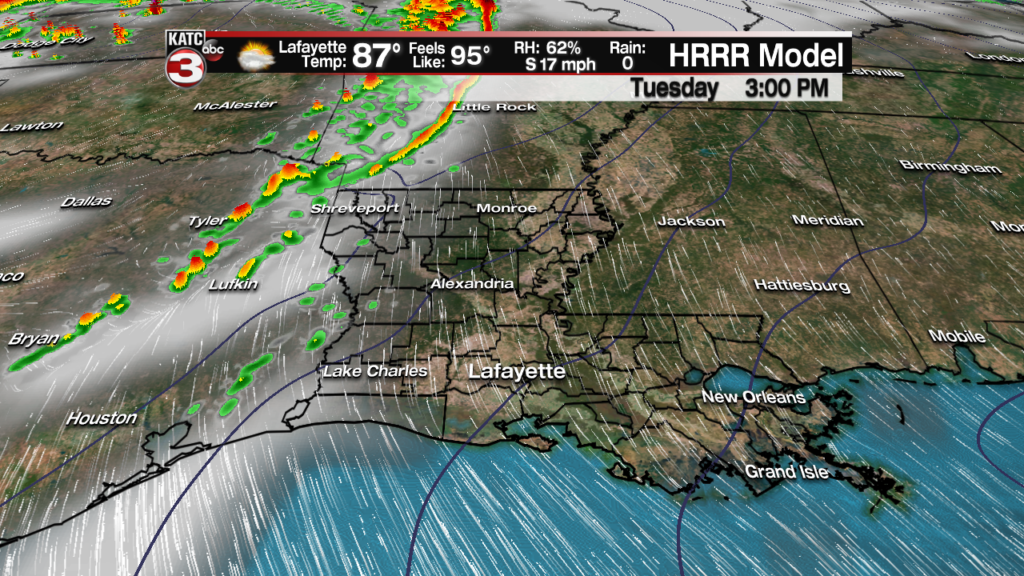 Gusty S/SE winds will continue overnight near 8-14 mph and near 18-28 mph with a few gusts over 30 mph possible Tuesday afternoon.

After a morning start in the balmy mid-upper 70s, temperatures will top out in the upper 80s with some of cooling effects of the Gulf of Mexico in place. 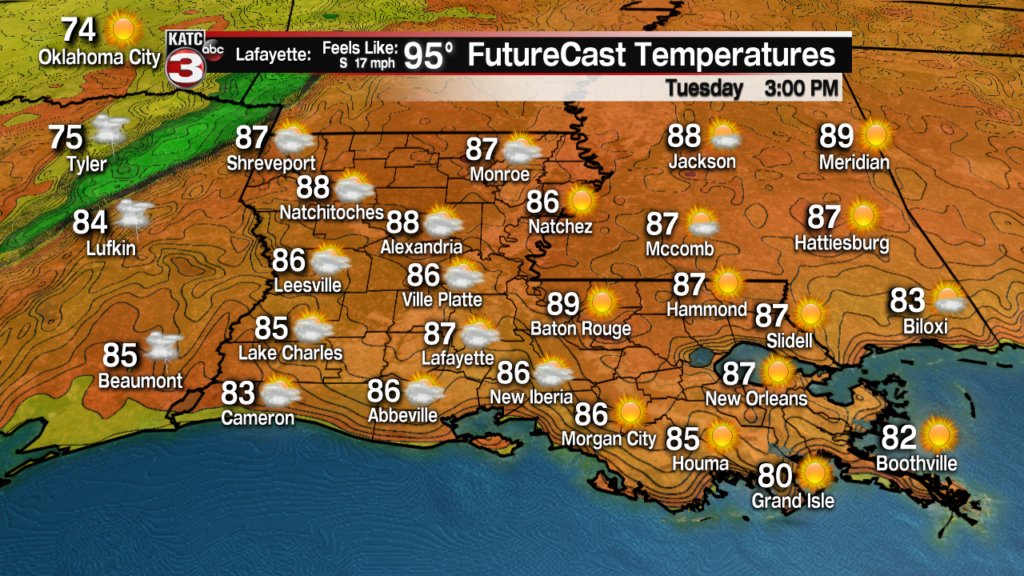 Despite the breeze, and partly cloudy skies, heat indices will have no problem reach the mid-90s Tuesday. 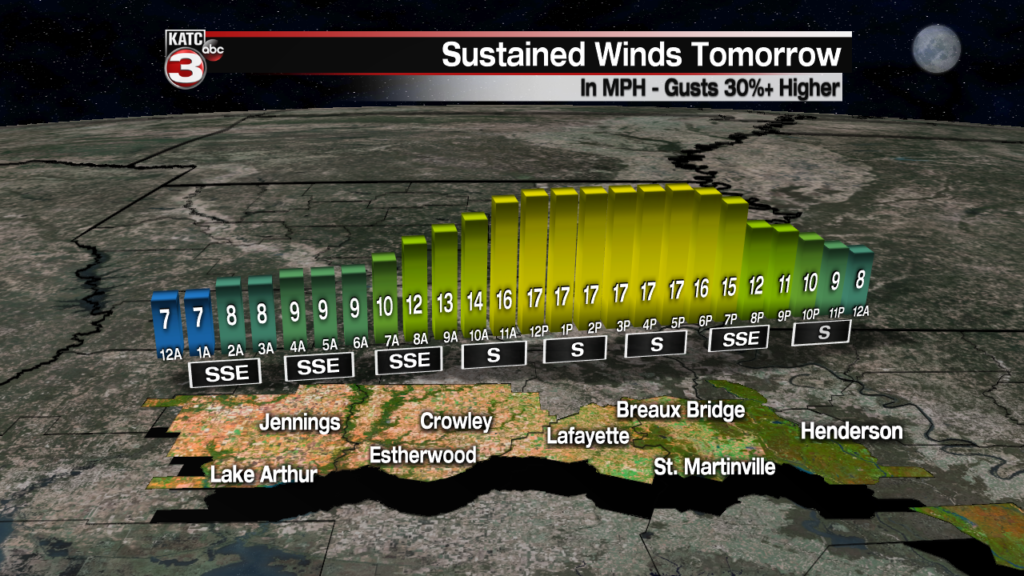 Rain chances will remain low for the area, near 10% Tuesday into Wednesday.

The windiness across the area will continue to contribute to two flood issues Acadiana will be facing Tuesday…with strong southerly to southeasterly winds feeding the big severe weather outbreak Monday evening into Tuesday well to our north, tides will rise to 1.5-2 feet above predicted astronomical values, so some inundations across the coastal areas including Intracoastal City, Decambre and Cypremort Point will be likely in spots Tuesday, and perhaps into Wednesday. 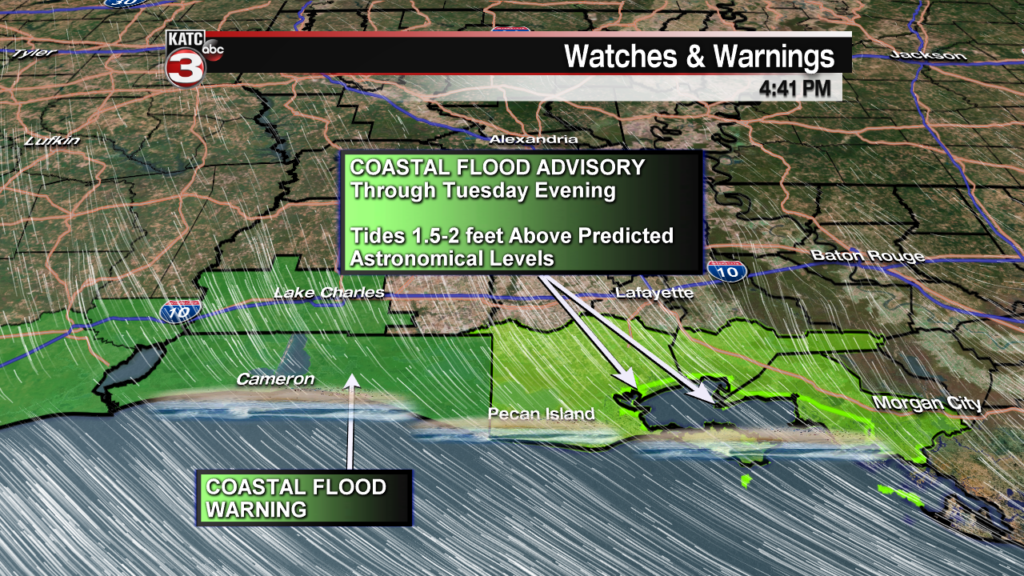 There is a Coastal Flood Advisory for Vermilion and Iberia Parishes, and a Coastal Flood Warning in effect for Cameron Parish through Tuesday evening with tides 2-2.5 feet above normal expected to inundate low lying areas and perhaps, portions of Highway 82 in spots.

The winds buffeting the coast are also exacerbating the flood threat in Lower St Martin Parish, and in particular Stephensville, where the combination of a high Atchafalaya River is not able to drain into the Gulf as readily, and not allow the recent rains to drain properly.

High water levels from the Mississippi to the Atchafalaya will continue through most of, if not all of June,

Per the Corps of Engineers Monday, “10 more bays were opened at Bonnet Carre Spillway yesterday to bring the total number to 148 open bays. We are holding there today.”

The spillway helps to ease some of the Mississippi River pressure downstream, but will have no impact on the water levels along the Atchafalaya.

The strong southerly winds will slowly abate over the next several days.

Wednesday will quite similar to Tuesday weather-wise, although probably not quite as breezy, so temperatures will have a better chance of topping out near 90…plus heat indices may push the upper 90s. 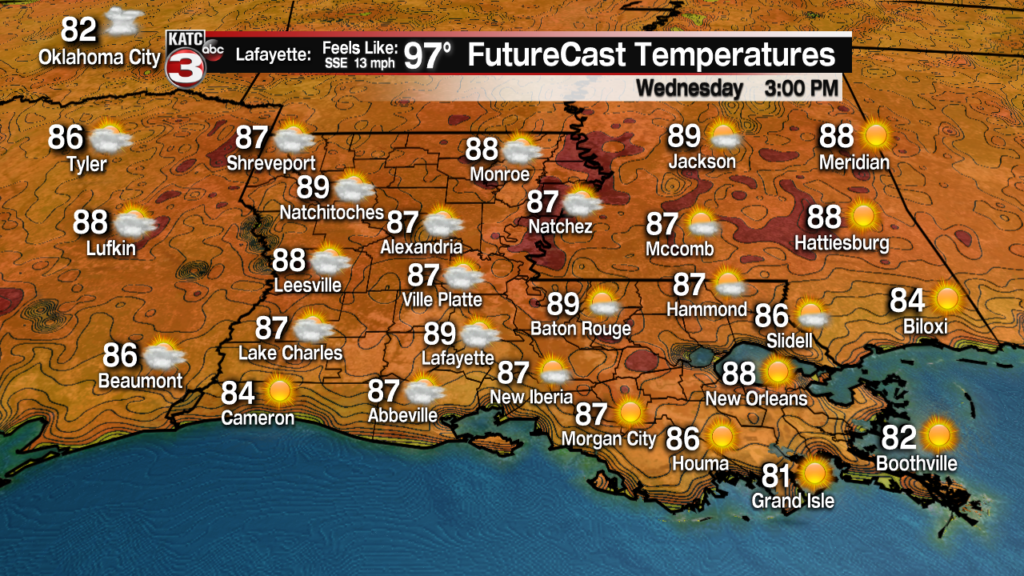 Rain chances Wednesday will be no higher than 10%.

Moving toward the end of the week and into the weekend, it appears that Acadiana will see a hot ridge of high pressure drifting westward into the area. 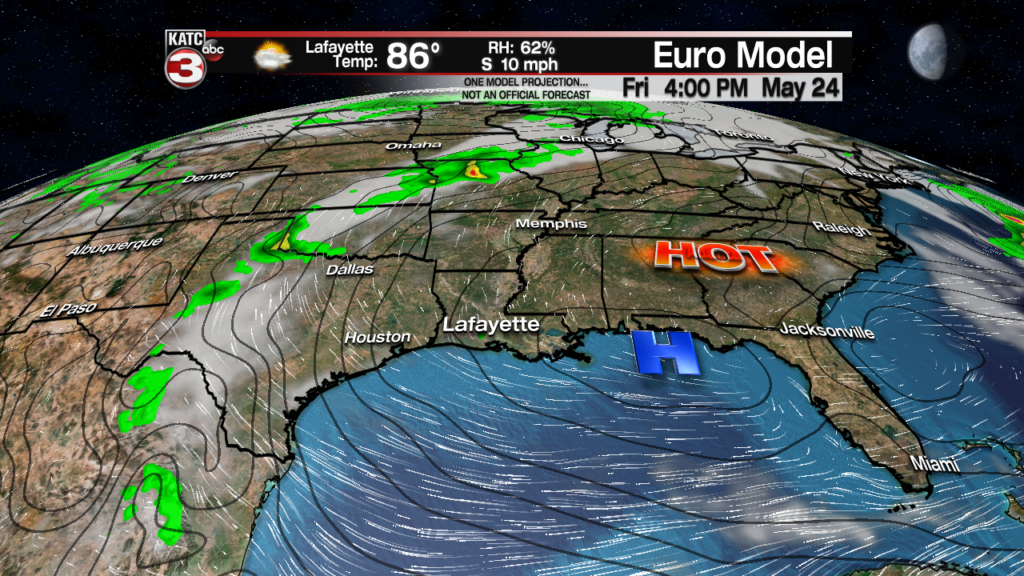 As a result, temperatures will get hotter this weekend, and especially into early next week, but fortunately dew points should get a little lower so the heat index shouldn’t get much higher than 100. 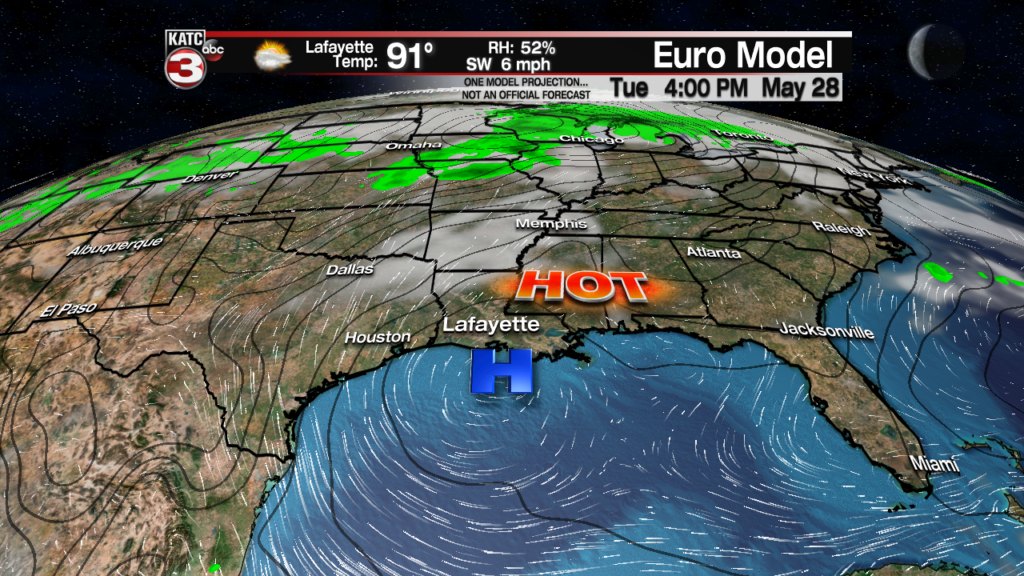 Nonetheless, a taste of hot and dry summer weather is on the way…see the latest 10 Day Forecast for the details.

And finally…in the tropics, the National Hurricane Center upgraded an area of disturbed weather in the Atlantic to Sub-Tropical Storm Andrea…the system will be short-lived as it moves northeastward, likely dissipating within 48 hours but could enhance rainfall near Bermuda over the next day or two. 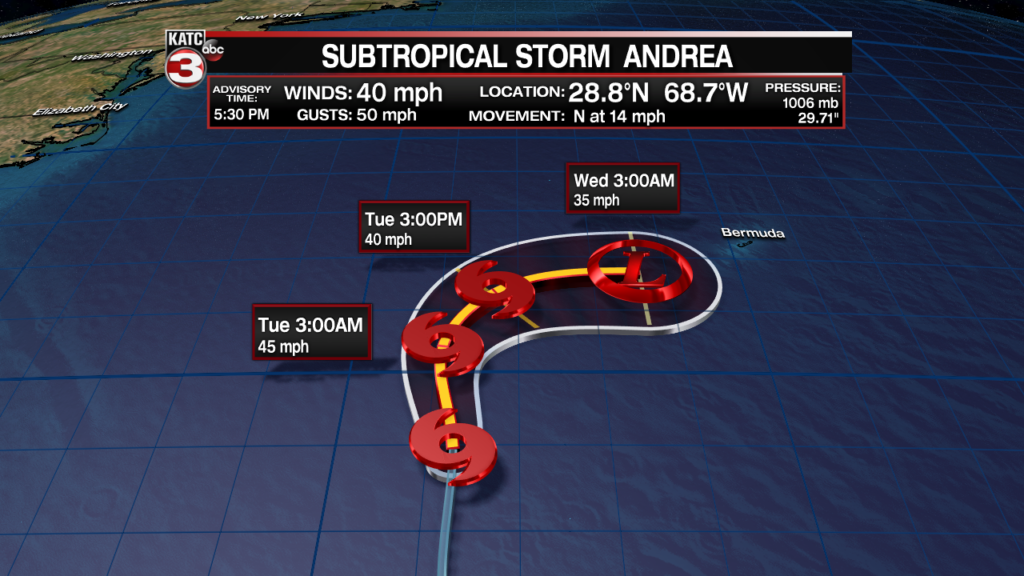