Strong to severe storms will be likely for Acadiana Thursday with prime-time for the strongest storms from west to east beginning from roughly during the mid-morning and ending by mid-late afternoon…give or take a few hours.

Per the Storm Prediction Center (SPC), all of Acadiana is hatched in for an “Enhanced” risk (level 3 out of 5) of severe storms. 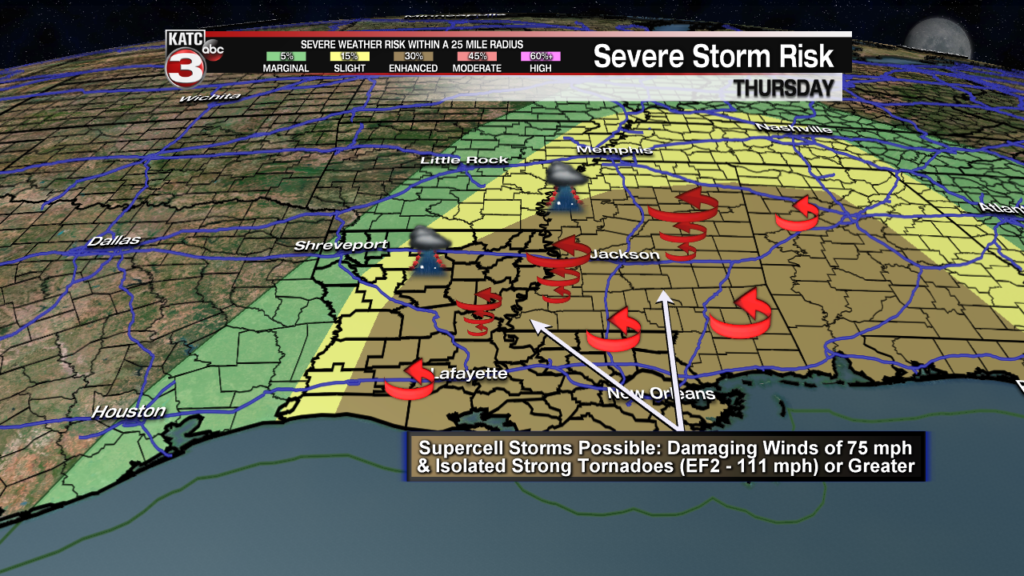 The primary threats will be for rotating supercells and perhaps a few tornadoes…one or two of which could be strong/significant, meaning EF2 (111 mph winds) or greater, but some of the severe weather parameters may be at there highest just east of Acadiana into Eastern Louisiana and Mississippi.

Storms will likely get cranking in the western sections of Acadiana by mid-morning and then begin to migrate eastward into the afternoon. 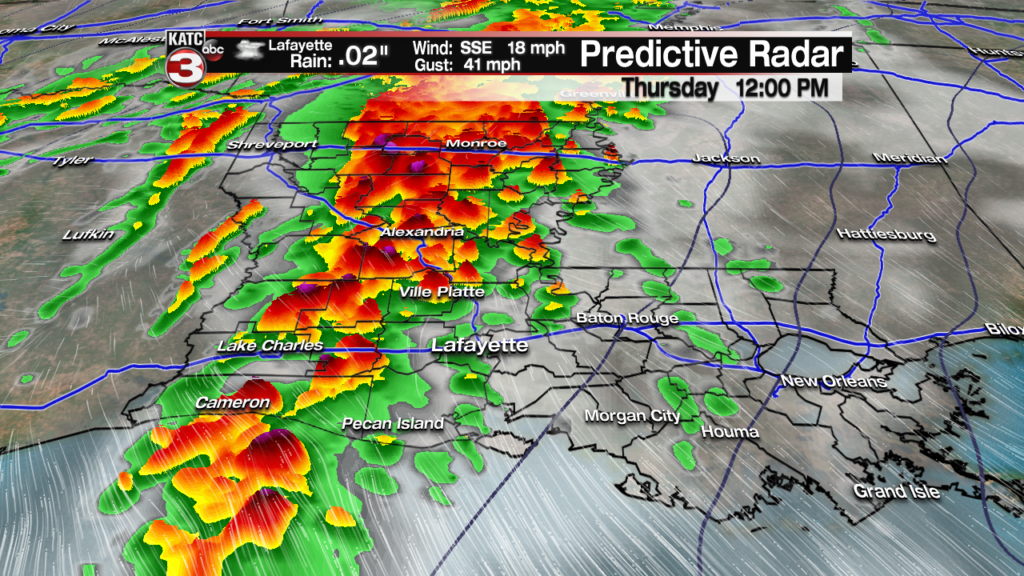 The severe weather threat could be two-pronged one Thursday with a few discrete (loner) cells forming ahead of a squall line back to the west.

These discrete cells could become small rotating supercells that could very well produce a couple of tornadoes…these cells will likely gain intensity as they race northeastward near 50 mph into the afternoon.

Then a broken to solid line of storms (or squall line) will advance through the area that could produce more embedded supercell storms capable of damaging winds in excess of 75 mph, a few tornadoes, and maybe some hail of a nickle to quarter-size…perhaps slightly larger in the northern sections of Acadiana. 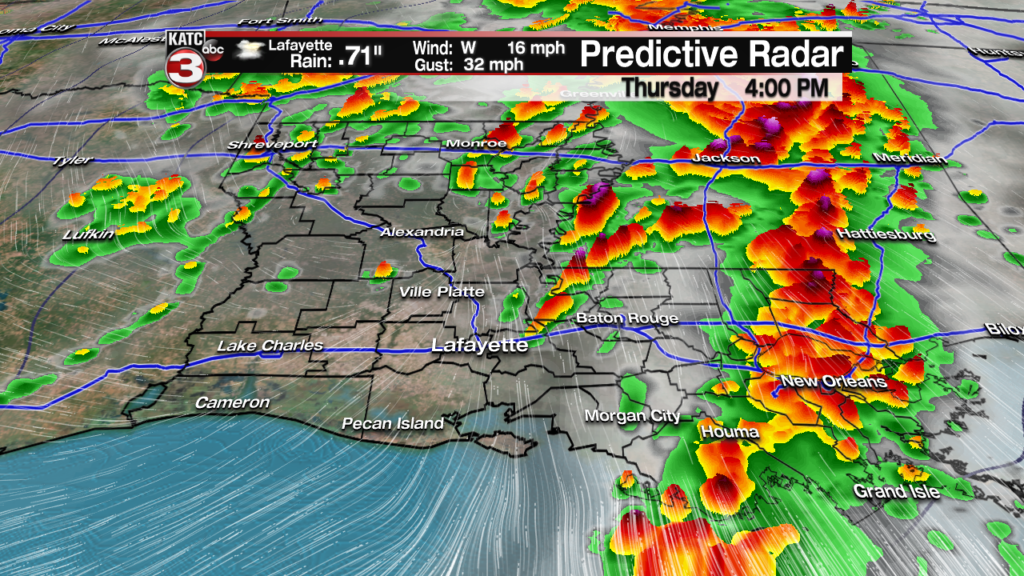 All in all, the greatest severe storm risk for Acadiana will likely be the threat of damaging winds (at roughly 30%) while the risk of significant/strong tornadoes will be at 10% (but a little higher for weaker EF0 to EF1 threats), and hail in the 15% range. 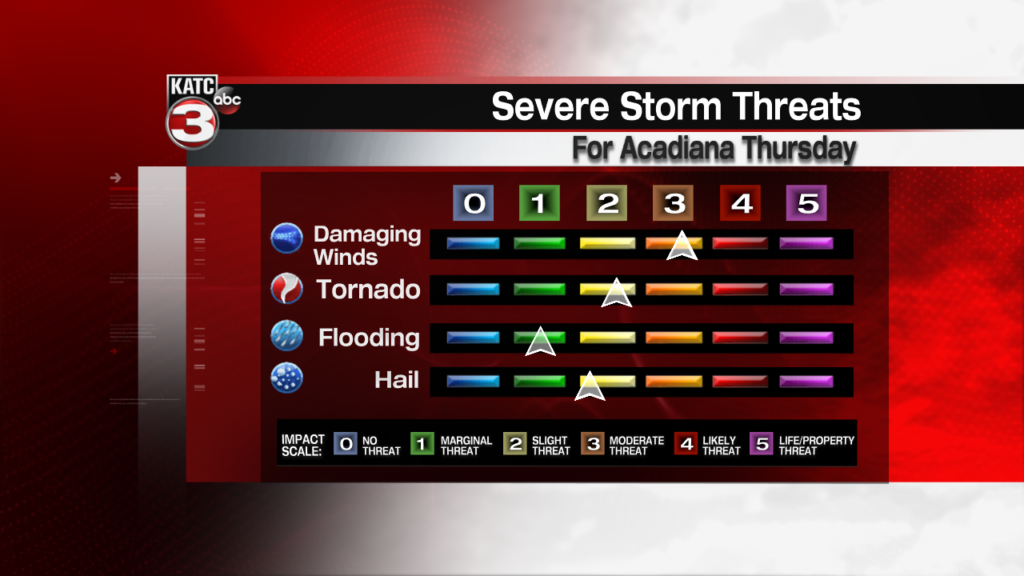 Flooding is not expected to be an issue in Acadiana as storms will be moving quickly across the area with no more than 1-2″ in some spots (probably within an hour or two) while most of us will likely see less than 1 inch. Much higher rainfall amounts will be possible toward the northern part of the state.

Whatever rain we see will likely be coming down in “sheets”, and occasionally sideways. 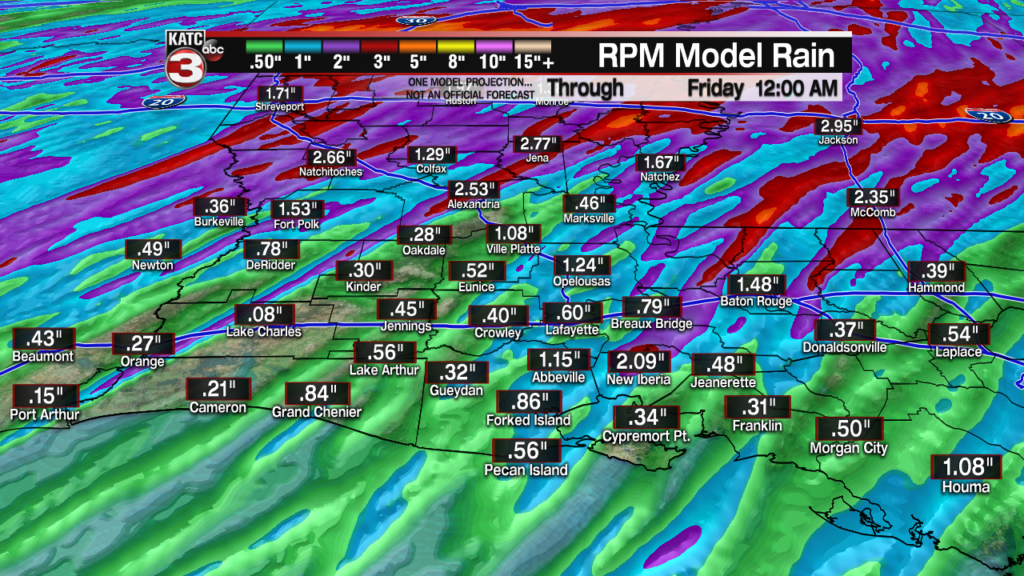 In addition to the severe weather threat, strong southerly winds near 20-30 mph with gusts to 40-45 mph may be possible ahead of the storms.

This could lead to a few tree branches and perhaps, some unhealthy trees falling, which could also lead to a few sporadic power outages, in the usual power-outage-prone areas.

The expected strong southerly winds have also prompted the National Weather Service to issue a Coastal Flood Advisory Thursday, which will produce tides 1-2 feet above predicted levels resulting in a couple of feet of water inundating the usual spots from the Ports of Iberia to St Mary and Cypremort Point…very similar to what occurred this past Saturday. 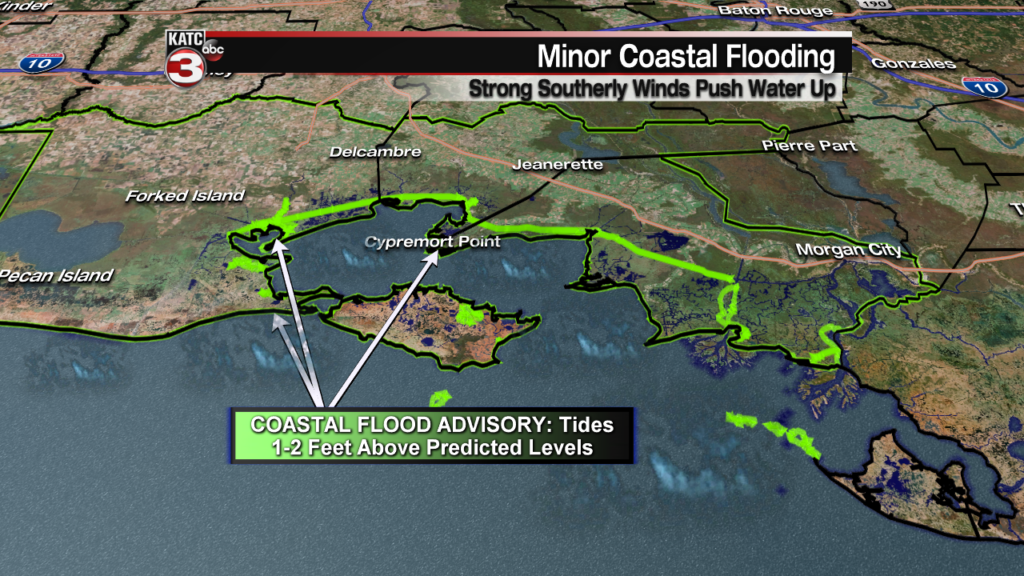 The storms will rapidly move out of the area by late afternoon/early evening with the slight chance of a few lingering renegade showers up until about midnight.

It should be a rather blustery, breezy and fresh day Friday, with sunny skies and a few intervals of “in and out” clouds.

Temperatures for Good Friday will top out in the upper 60s to lower 70s and then likely drop into the mid to upper 40s late Friday night into Saturday morning.

The Easter Weekend looks stellar with lots of sunshine accompanied by temperatures in the mid-upper 70s Saturday, and upper 70s to near 80 Sunday.

The weather pattern will become a little more unsettled toward the mid and latter part of next week, with hopefully no major impacts upon Festival International, so consult the KATC 10 Day Forecast for the latest.