After a chilly, but above freezing night, Acadiana can expect much milder temperatures for the rest of the week accompanied by plenty of cloud cover into the weekend.

And by Saturday, there will be a good chance of showers and thunderstorms, some of which could be severe.

In the near term, temperatures overnight will bottom out in the upper 30s to lower 40s under fair skies, with more clouds arriving shortly before daybreak. 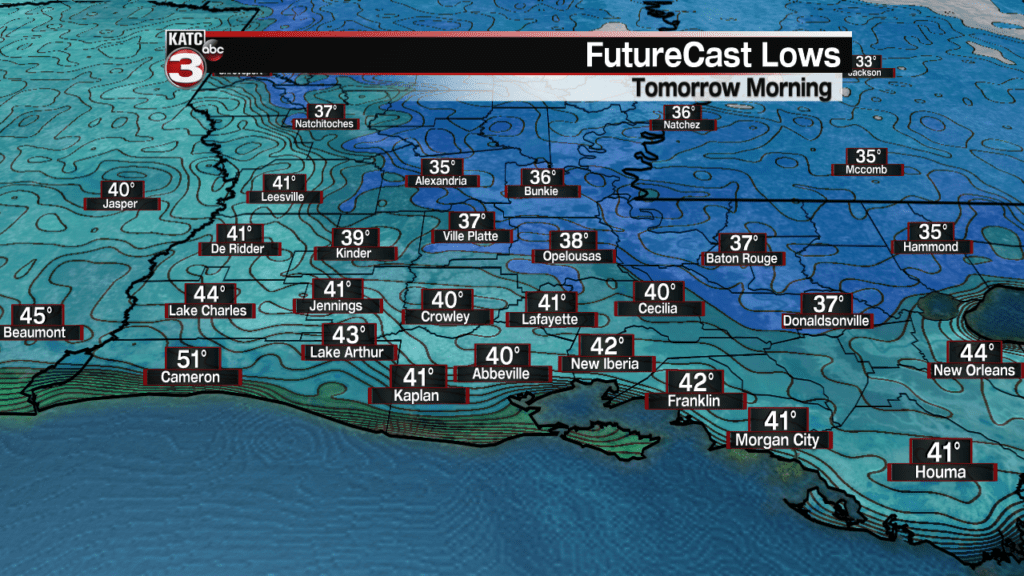 Thursday will be a mostly cloudy, breezy and milder day with temperatures rising into the mid-60s behind a warm front. 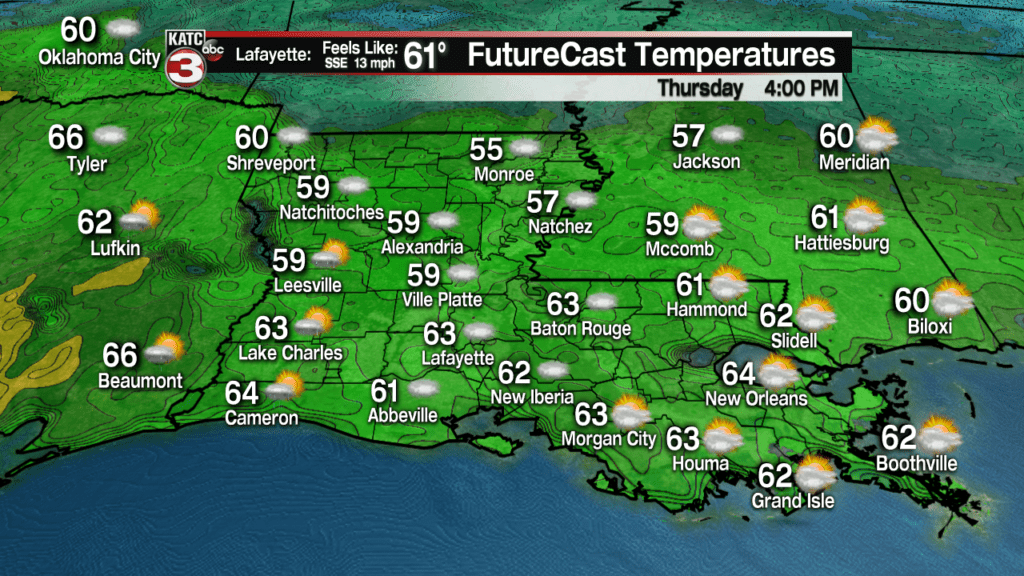 A sprinkle or two is possible Thursday, but rain chances will be near 10% or less. 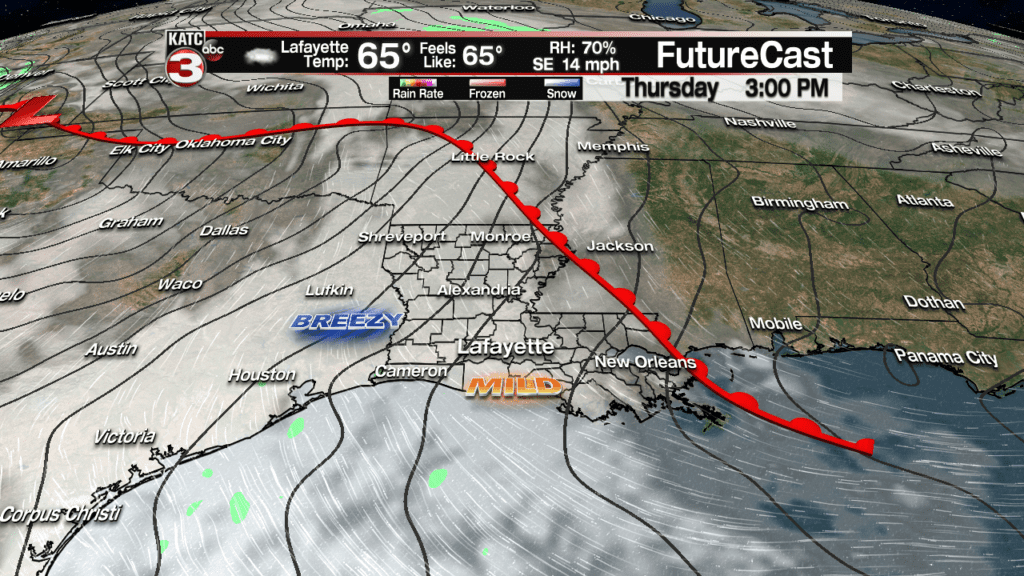 Milder temperatures and the risk of a few daytime, scattered showers will be possible Friday with rain chances near 30% primarily from midday to mid-afternoon. 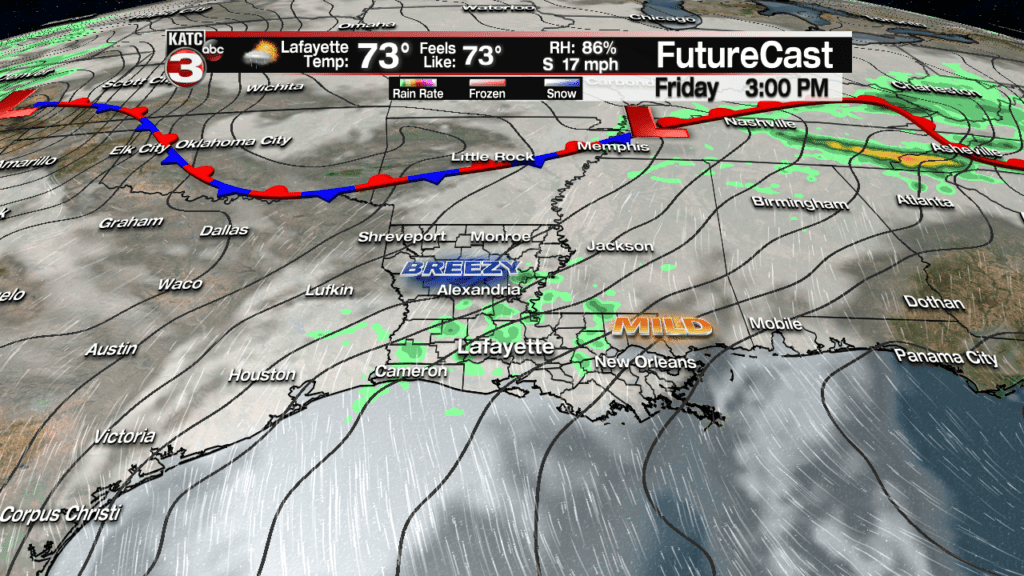 Highs Friday will push into the mid-70s courtesy of gusty southerly winds. 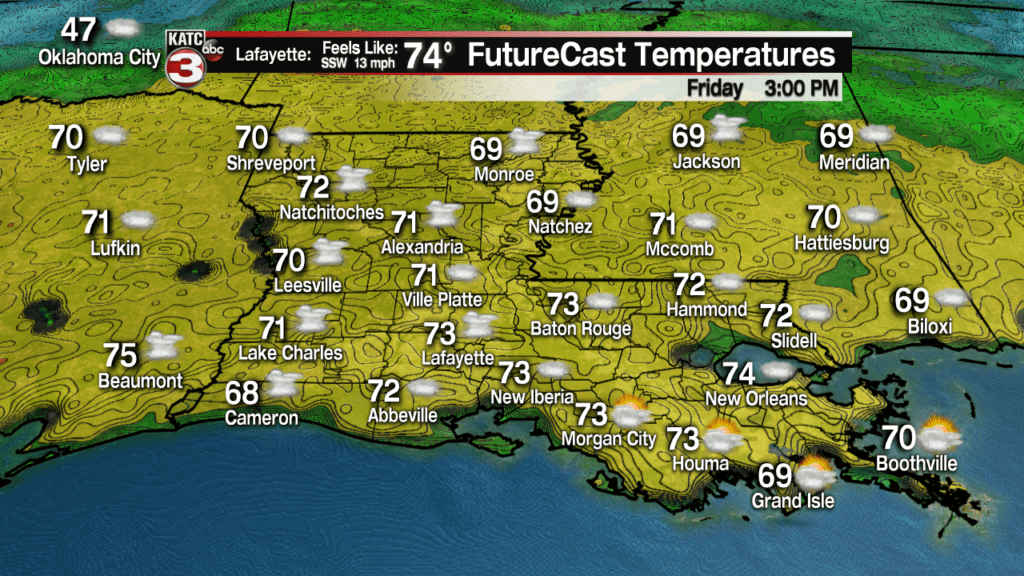 Acadiana’s next weather-maker will arrive in the form of a slowing cool front Saturday. 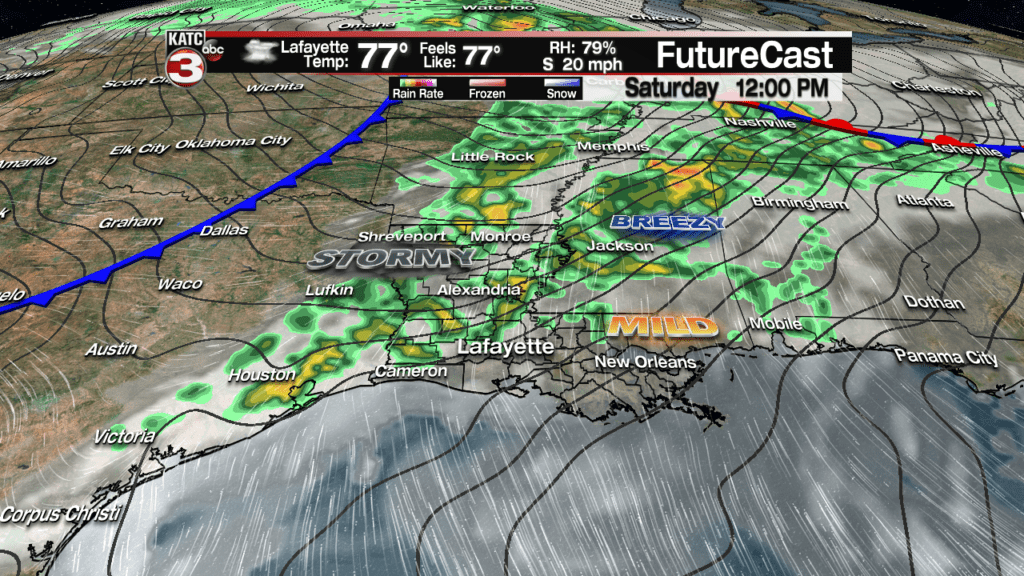 A good chance of showers and thunderstorms is expected primarily Saturday afternoon, with a few storms potentially severe.

The Storm Prediction Center (SPC) has most of Acadiana, Louisiana and a good part of the Mid-Lower Mississippi Valley hatched in for a “slight risk” of severe storms Saturday, a level 2 out of 5, 15% risk, in their 4-day outlook period. 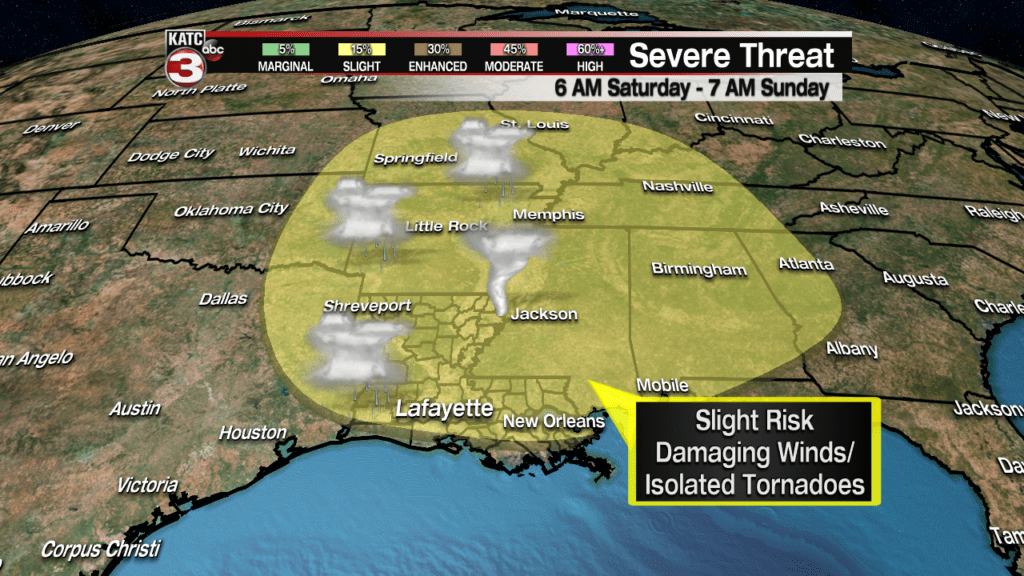 The SPC has broad-brushed the region because of the possibility of strong dynamics in place, but because the event is more than 72 hours out, the risk area (and perhaps levels) will likely change once additional forecast parameters are fully understood.

The main mode of severe storms would be damaging winds and isolated tornadoes, with the tornado factor increasing farther to the north of Acadiana and in the northern part of the risk zone.

Nonetheless, it would not be surprising to see an upgrade to enhanced risk of severe storms from Northeast Texas into Northern Louisiana and much of Arkansas, and perhaps areas to the northeast of those areas where the strongest severe weather dynamics look to manifest. 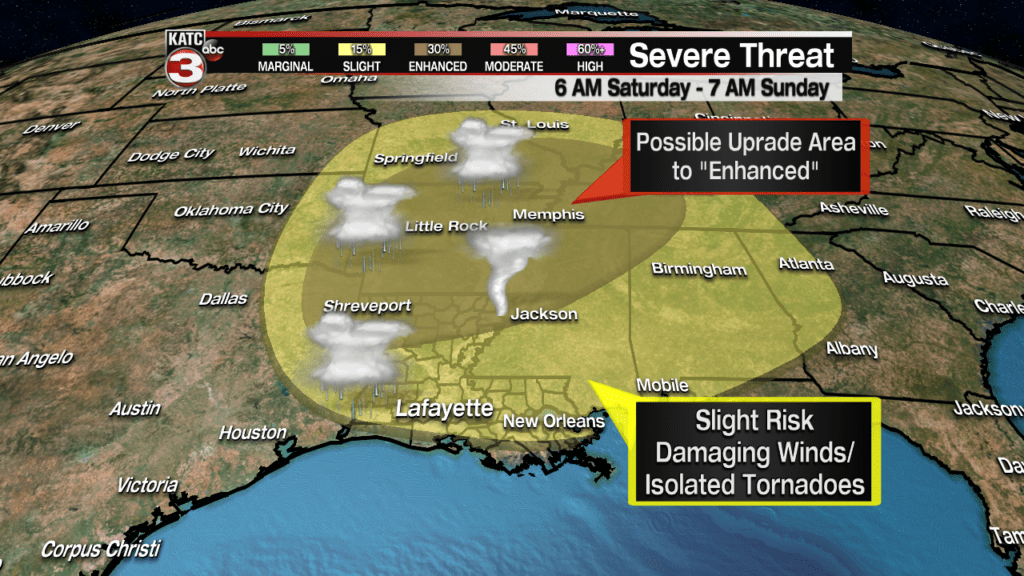 At the same time, the southern/southwestern portions of the outlook area may get pared down to a “marginal risk” and perhaps include portions of Acadiana…stay tuned as this aspect of the forecast will likely change.

Chance of storms Saturday will be in the 70% range, but the frontal boundary will transform into a quasi-stationary front draped across the state and the Acadiana area into Sunday keeping some rain chances in the forecast through the latter part of the weekend and into early next week. 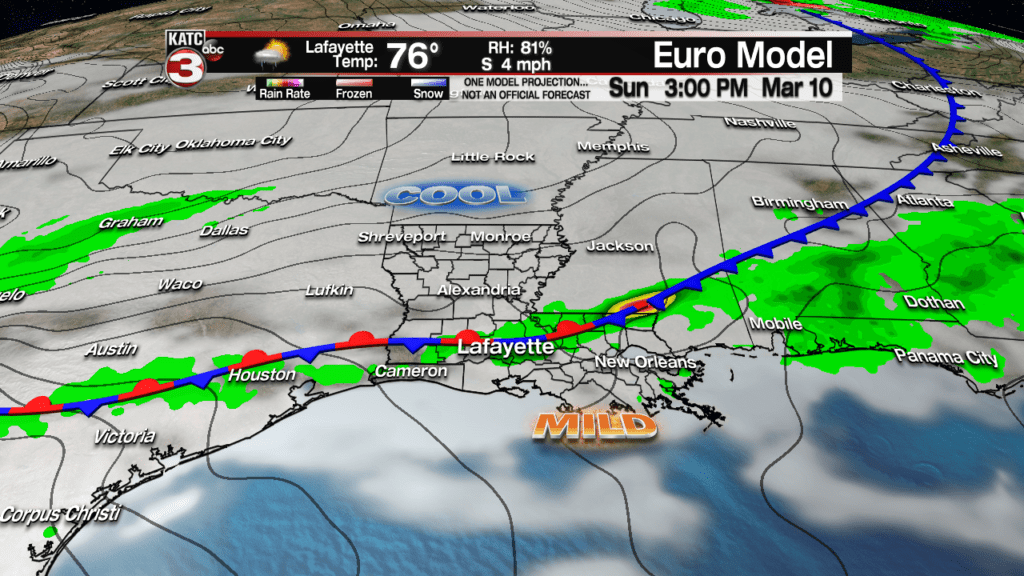 The same frontal boundary should drop southward Monday allowing for slightly cooler conditions but then head back to the north Tuesday getting our temperatures back well into the 70s ahead of the next storms system that is likely to bring another good chance of showers and storms Wednesday into possibly Thursday. 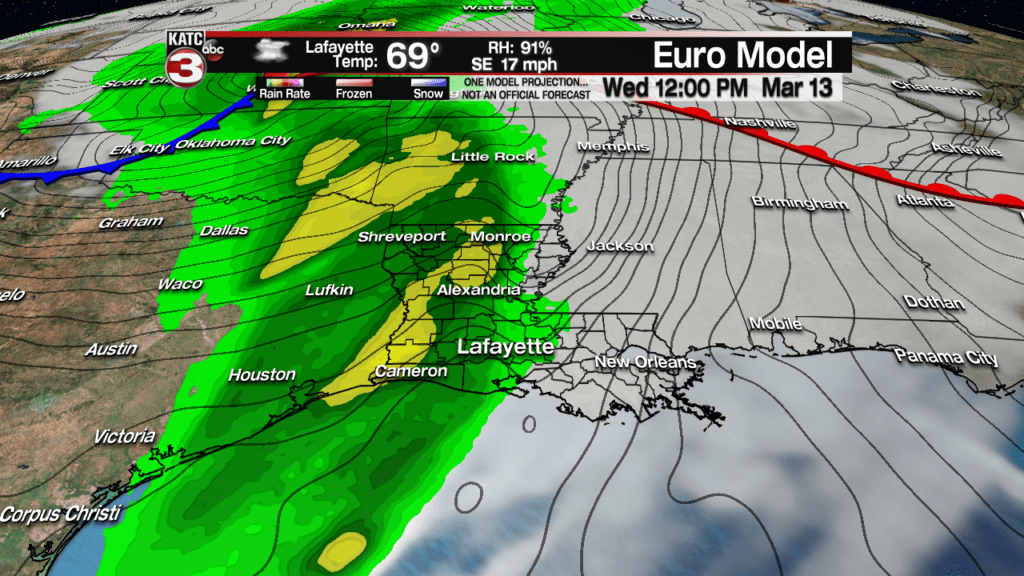 And there could be another severe weather threat with the storms next Wednesday.

If it all works out, Acadiana could see sunny skies with seasonably cool temperatures for the weekend that follows…fingers crossed!