Acadiana will be the beneficiary of a pleasant and seasonable, winter pattern this weekend, with mostly sunny skies, punctuated by occasional high cirrus clouds along with highs in the low-mid 60s.

It will be even milder Monday ahead of a sharp cold front that should bring a very brief taste of winter early Tuesday morning…more on that later.

In the near term, expect generally fair skies overnight through daybreak Saturday with lows in the mid-upper 30s…still cold enough for some patchy frost in spots, so you probably want to keep the tender vegetation covered for one more night. 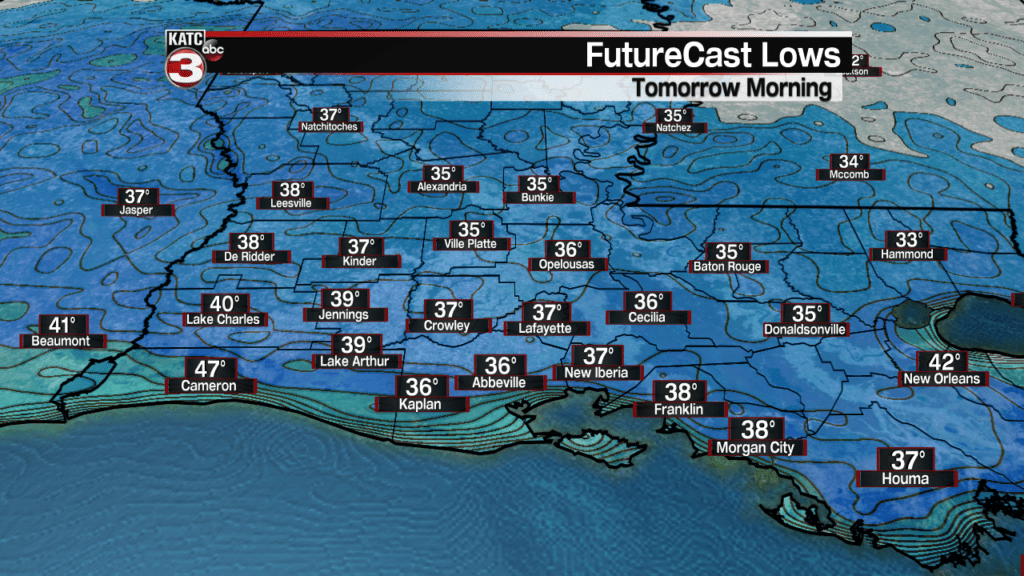 Saturday and Sunday will be mostly sunny days with a few periods of high clouds keeping the skies interesting with most high cloud cover likely Saturday night into early Sunday as a weather system well to our south bypasses the region. 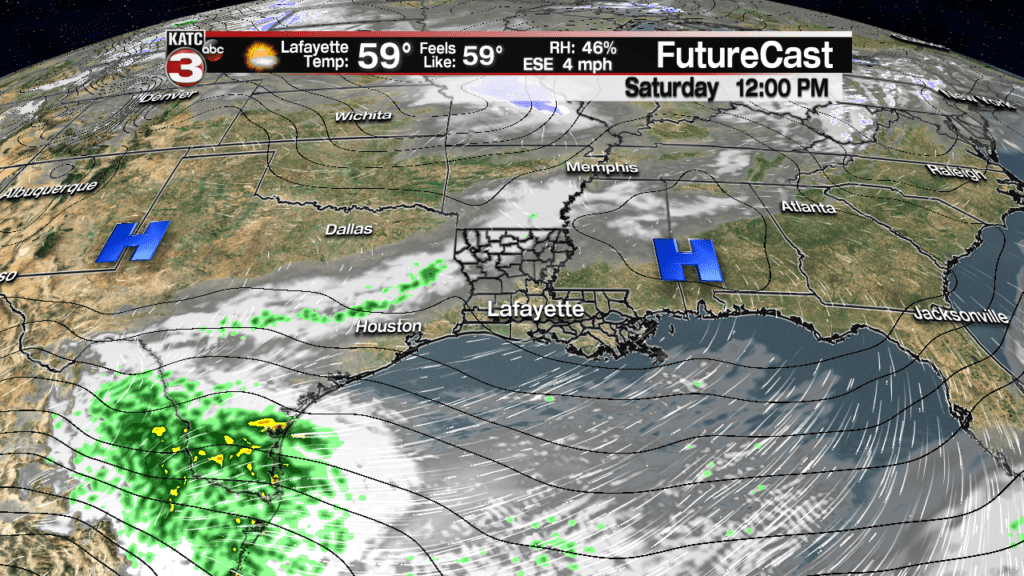 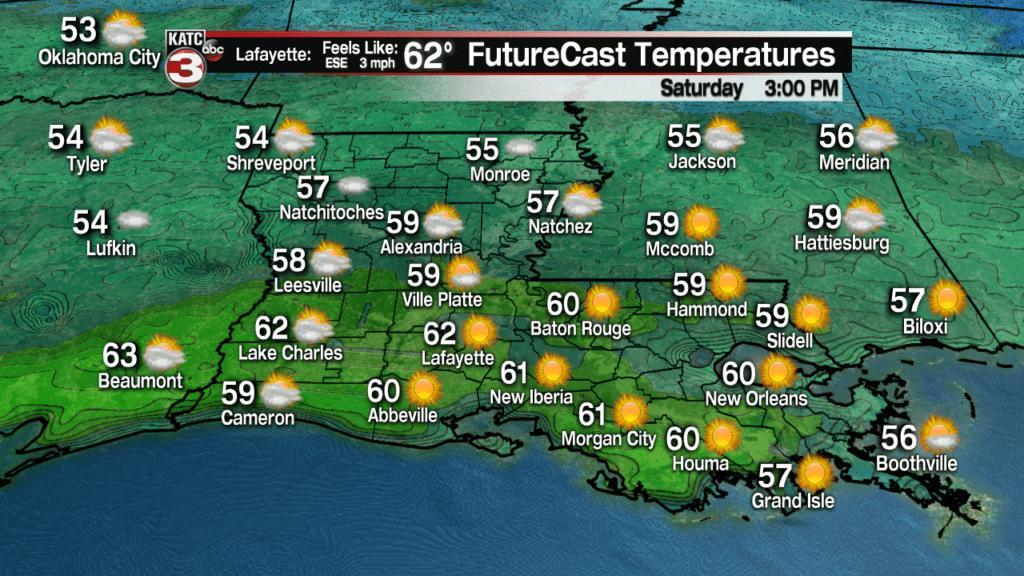 Temperatures Saturday night will stay above the frost zone with the high clouds, likely staying in the low to mid 40s. 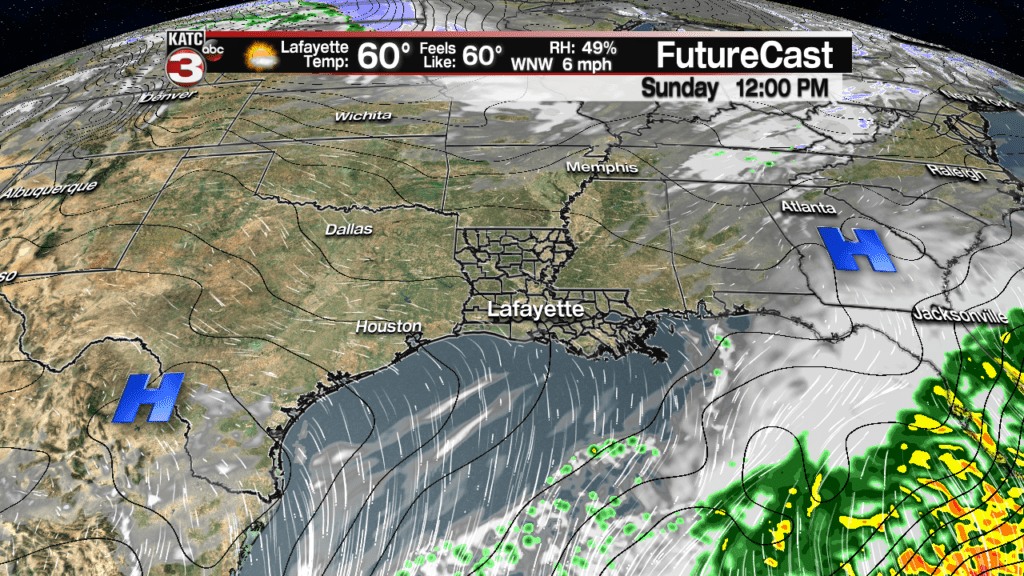 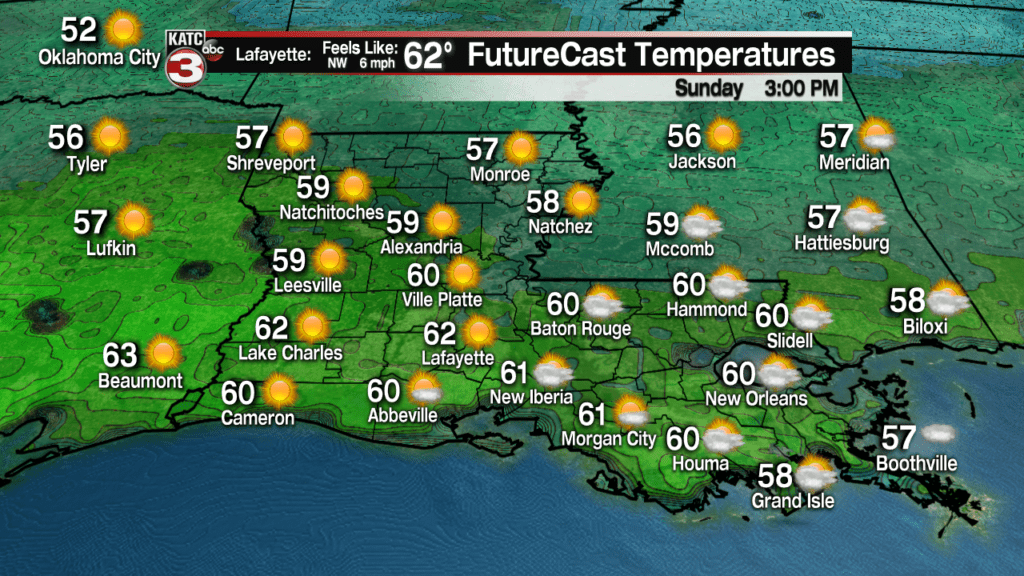 More clouds and breezy southerly winds will get our temperatures into the upper 60s to near 70, but 36 hours later Acadiana may see readings some 40 degrees colder, in the upper 20s.

The question on everybody’s mind is to whether there will be any winter weather that could immediate follow a strong cold front that arrives around daybreak Tuesday. 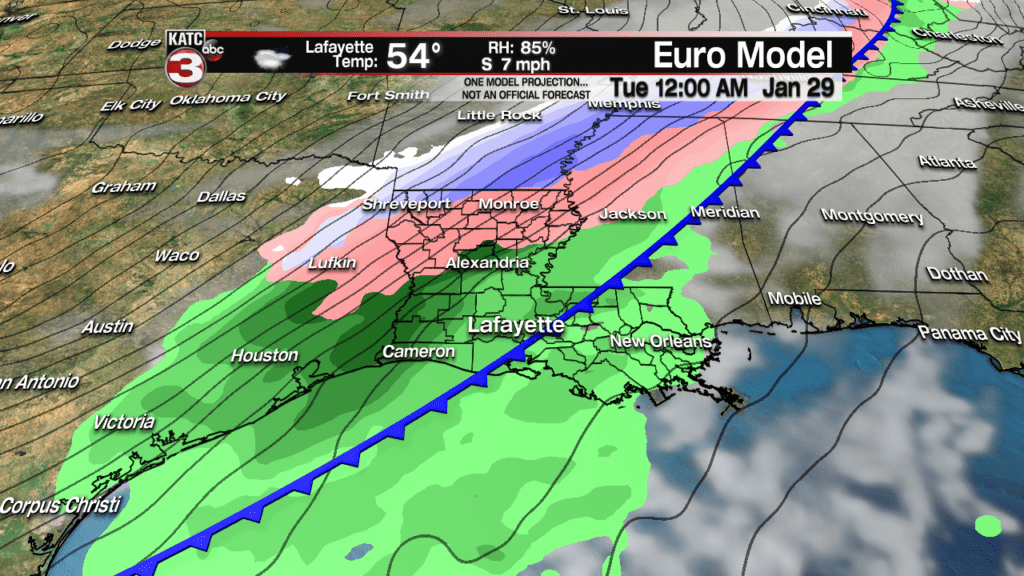 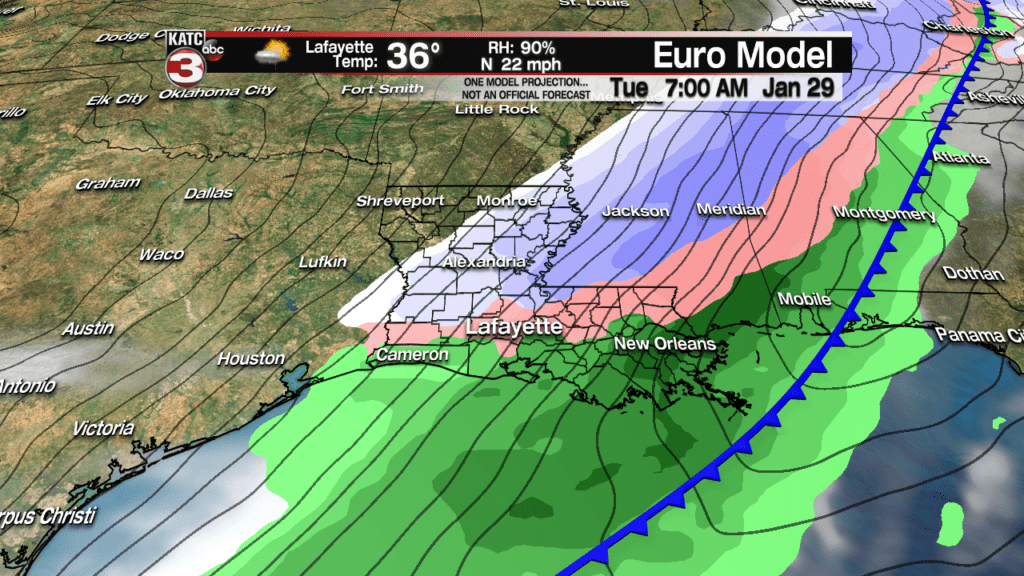 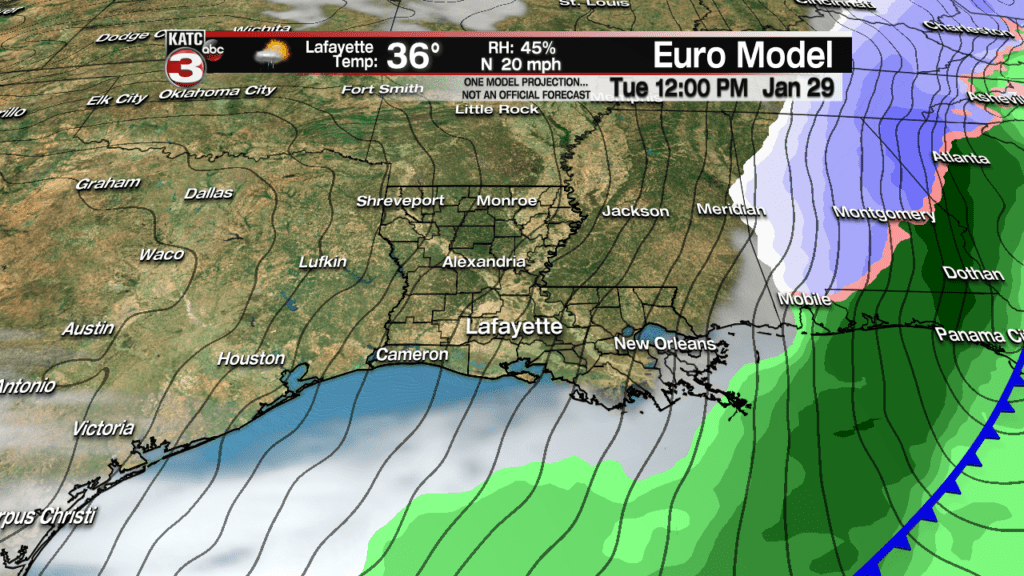 Latest model guidance continues to show a very small window of opportunity of showers that will be ongoing prior to daybreak Tuesday changing over briefly, to a few snow flakes and or ice pellets.

At this time, anything frozen precipitation that would fall across the area, especially northern portions of Acadiana, would be very short-lived, lasting less than an hour, and will not accumulate on the ground…remember the day before we’ll be near 70!

So there will be no travel issues nor hazardous weather, other than the slim chance that there may be a few flakes or sleet pellets to see falling from the sky in Acadiana, especially the northern-most parishes.

Once again today, the European Model is more bullish on the winter precipitation than the GFS Model. 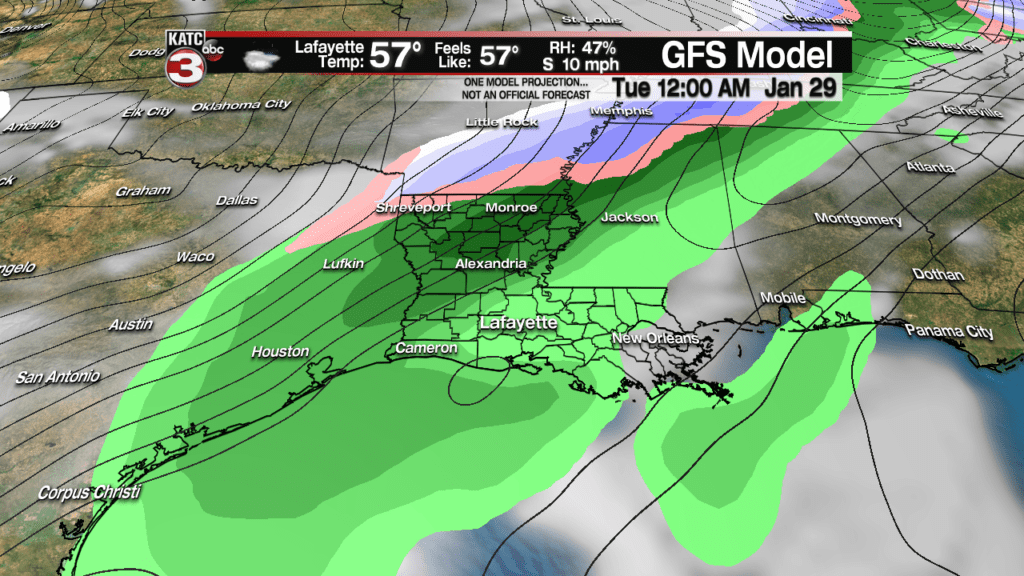 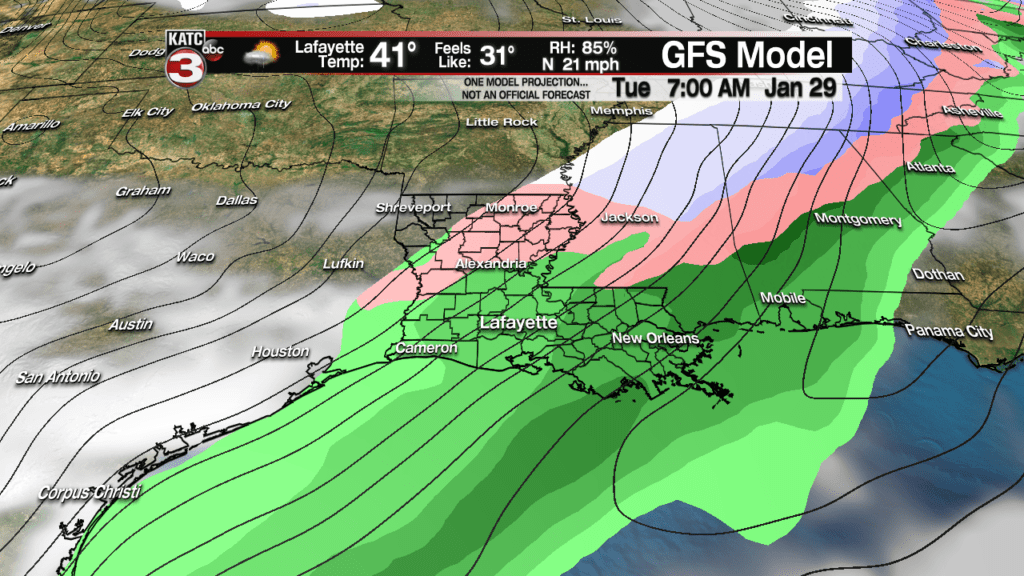 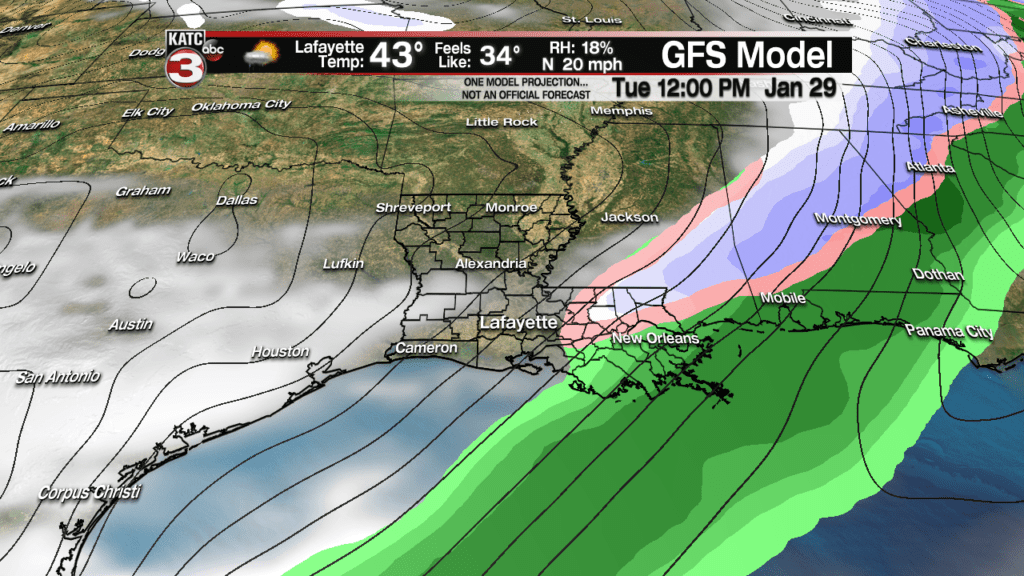 It should be noted though that there could be a light dusting of winter precipitation north of Acadiana Tuesday, mainly closer to the northern part of the state…but as sunshine is expected across the region Tuesday afternoon, the winter weather will be a “gone pecan” by the afternoon.

Obviously forecasts change and as of this story, we’re 4 days away…so temper any excitement for winter weather with the fact that absolutely no frozen precipitation is an equal possibility!

We’ll have much better details on this event, or non-event, by late this weekend into Monday so stay tuned.

And as I have mentioned on social media and on the air, this might be the only chance we get to see a snow flake this winter…and right now it’s not a really good chance at this point.

Temperatures will likely drop to perhaps some of the coldest readings of the winter, into the mid-upper 20s Wednesday morning…but it remains to be seen as this will be a hard freeze or just another light one.

Temperatures will moderate quickly later next week with some showers possible Thursday and/or Friday.