The National Weather Service has hoisted a Flash Flood Watch for all of Acadiana for Friday evening into Saturday, with most of the heaviest rains likely to arrive in the area Saturday. 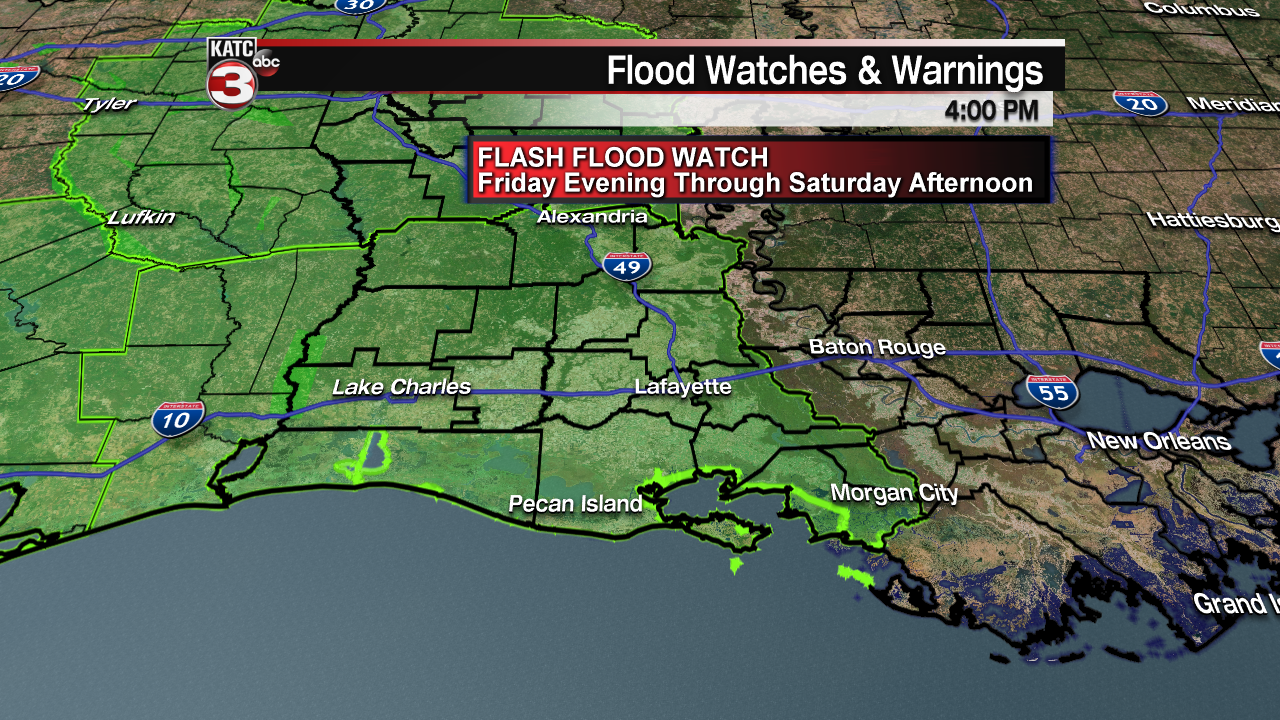 A potent storm system will be moving into Texas Friday with an area of surface low pressure advancing east-northeastward from the Texas Coastal Plains toward Southern Louisiana Saturday. 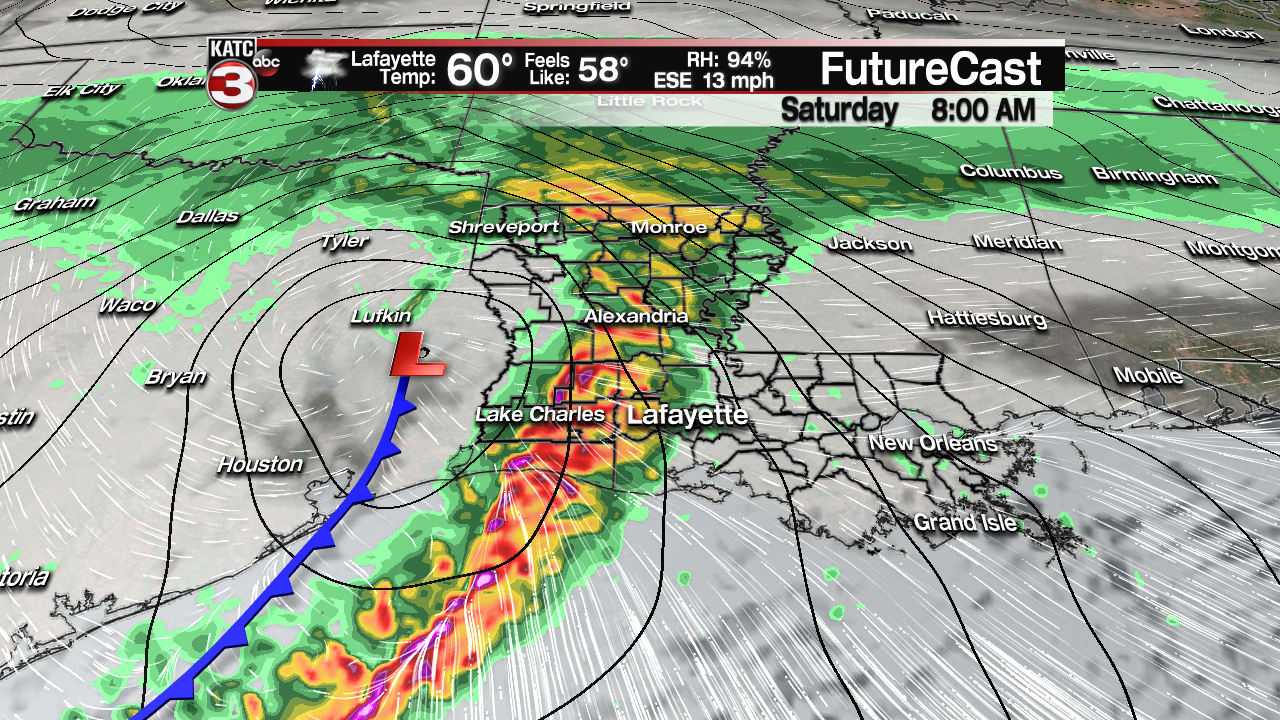 The low will likely bring periods of rain, occasionally heavy with a few embedded thunderstorms, for several hours Saturday. 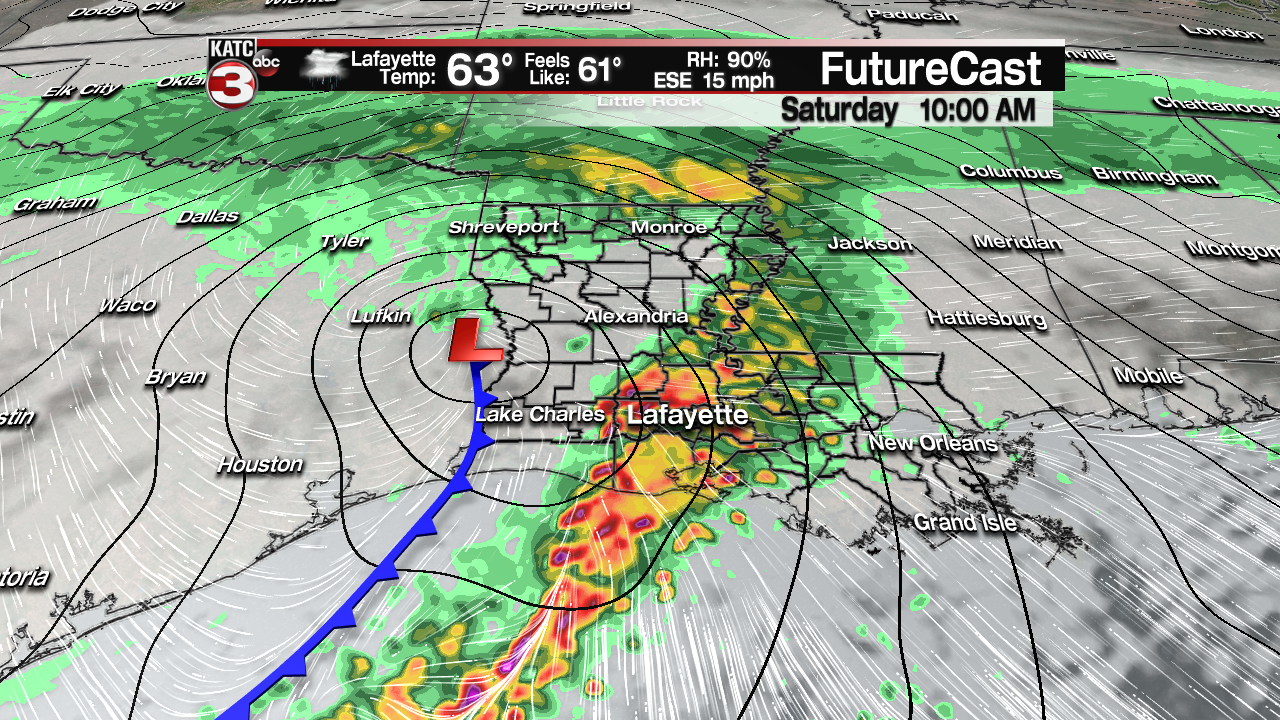 Prime time for the heaviest rains will be from daybreak through mid-afternoon, with lighter activity gradually tapering by Saturday evening. 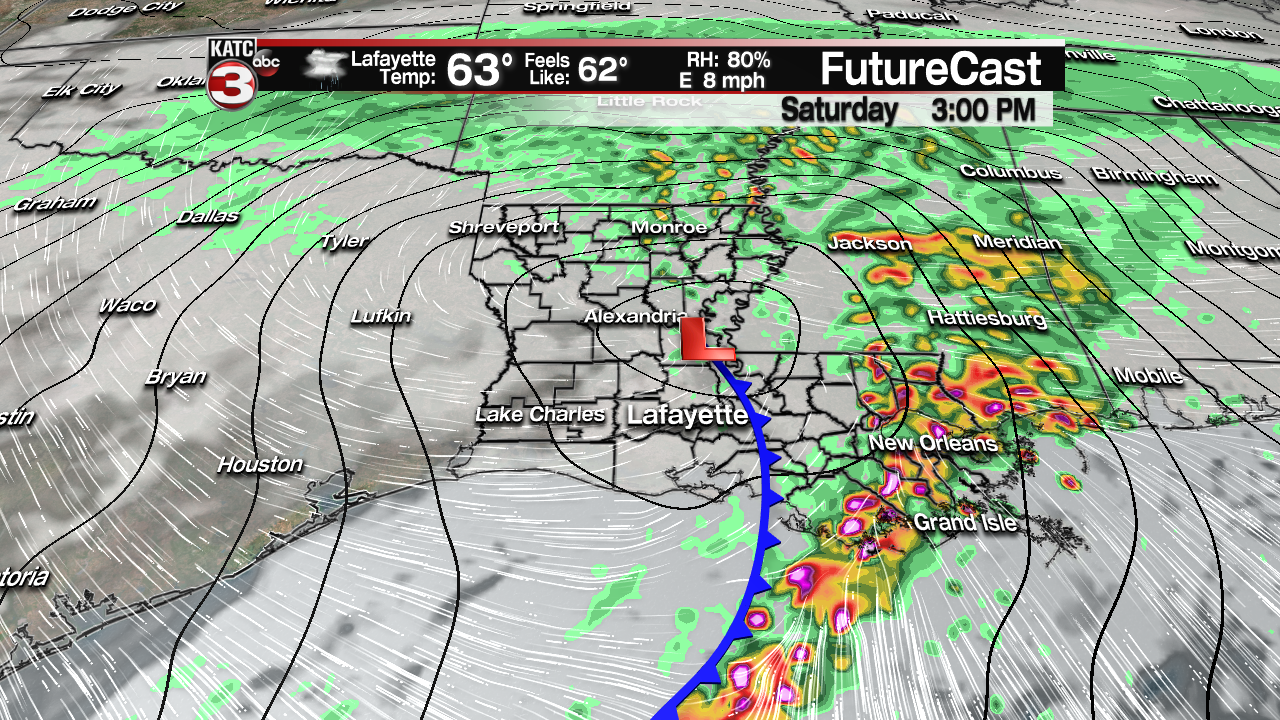 Computer model guidance has remained quite consistent with 1-3″ of rainfall likely for most areas of Acadiana Saturday, with isolated amounts up to 3-5″ possible in spots that could lead to localized street flooding and run-off issues. 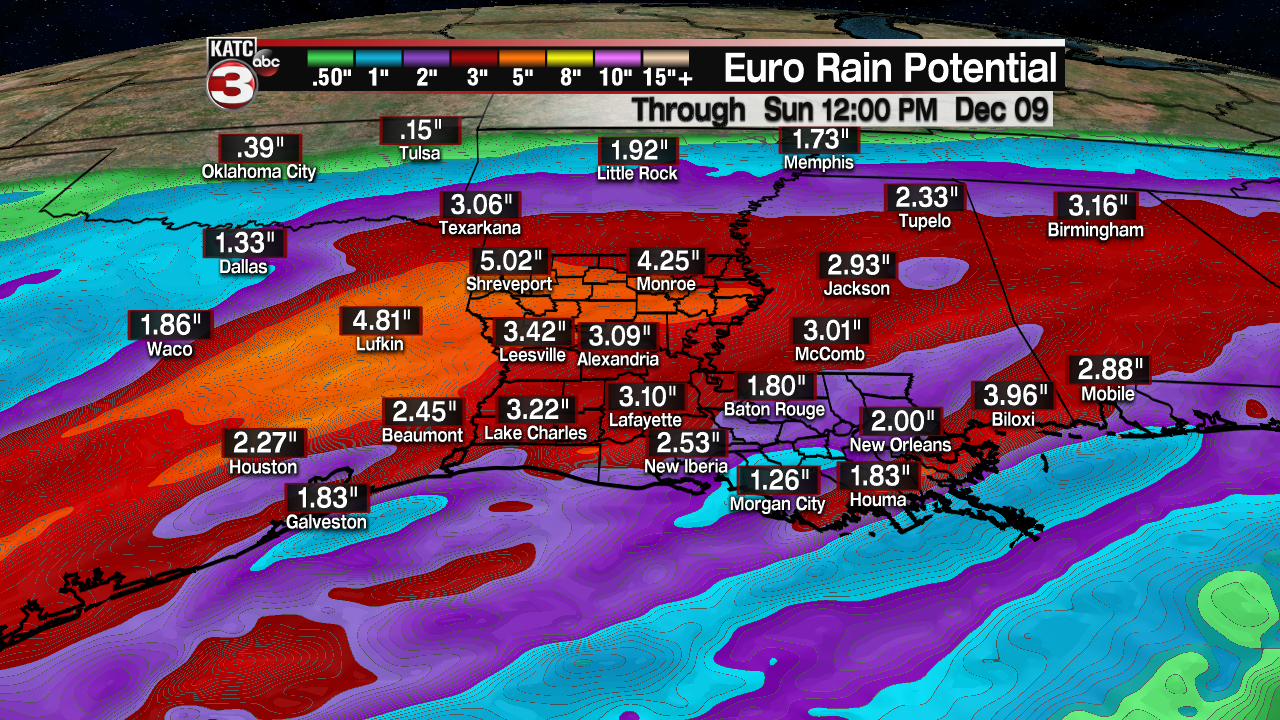 At this point, a widespread flood event is not anticipated due to the progressive nature of the low pressure system, but there could be a few hours Saturday, when travel could be hazardous because of some high water and ponding on the roadways. 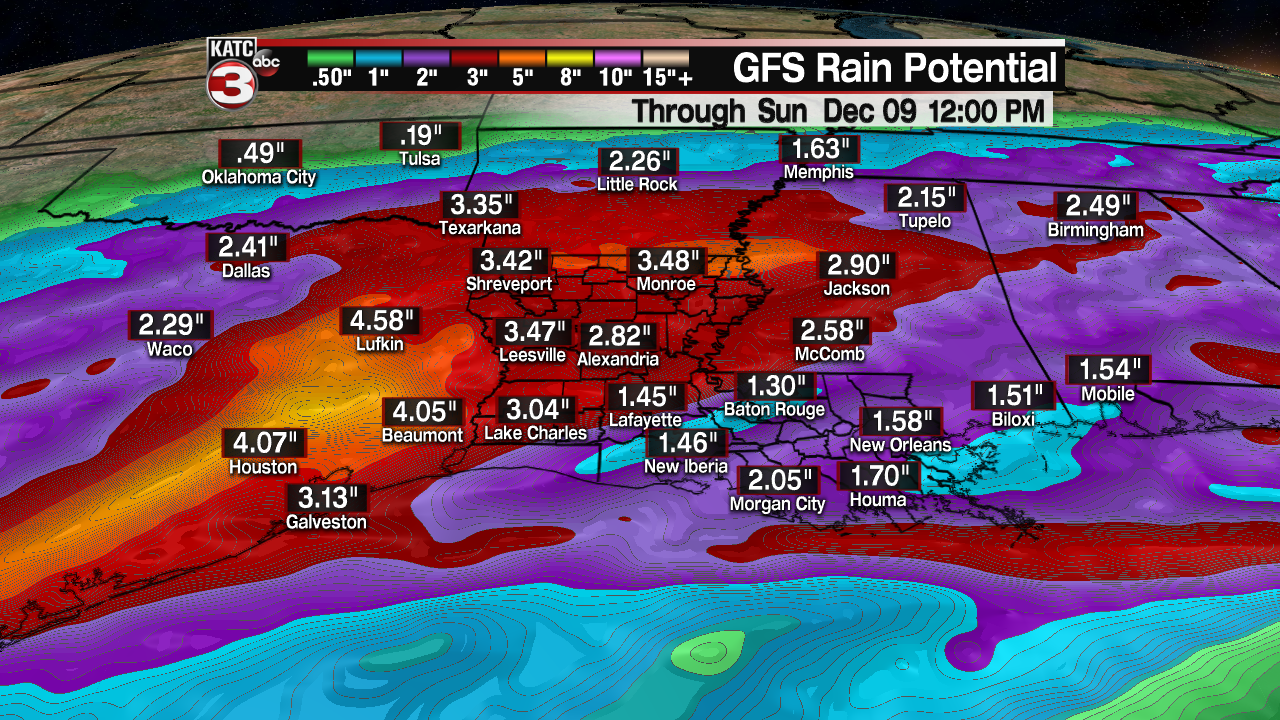 All of Acadiana is hatched in for a “slight risk” of excessive rainfall by the Weather Prediction Center, with Texas currently in the bulls-eye for a “moderate” risk of up to 3-6″ of rainfall there Friday. 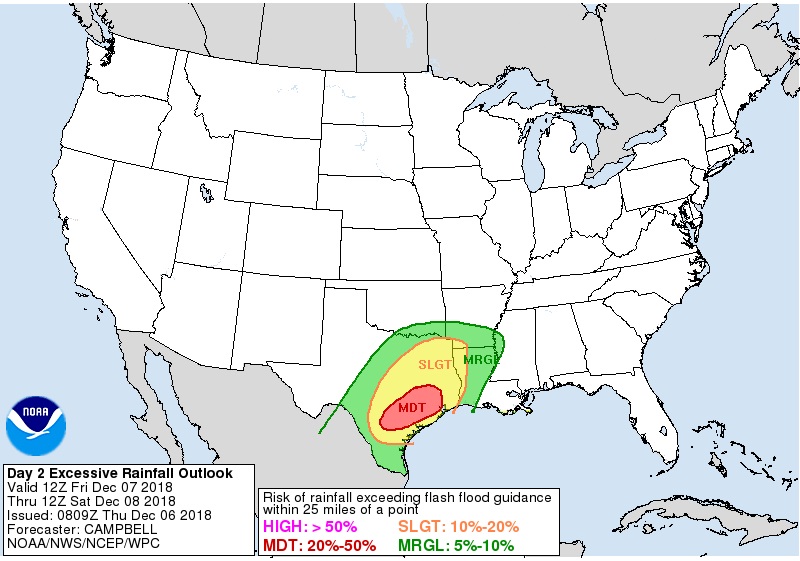 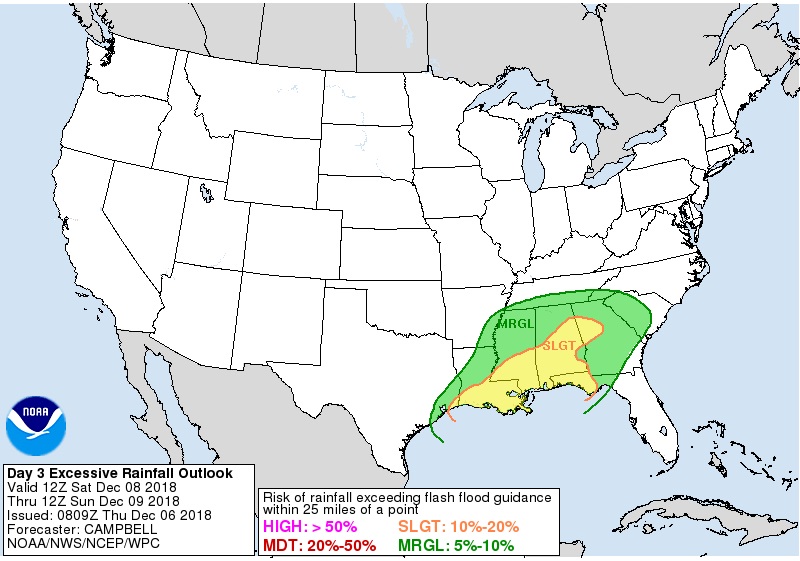 Any severe weather threat for the area remains quite limited, and less than a “marginal risk” at this point per the Storm Prediction Center.

The GFS is the only model indicating a slight risk of some “helicity” in the region, which is a turning tendency, or a “cork screw” motion to storms that could lead to a cell producing damaging winds or an isolated tornado…something to watch based on the ultimate track of the low pressure system, but not a major a major concern at this time. 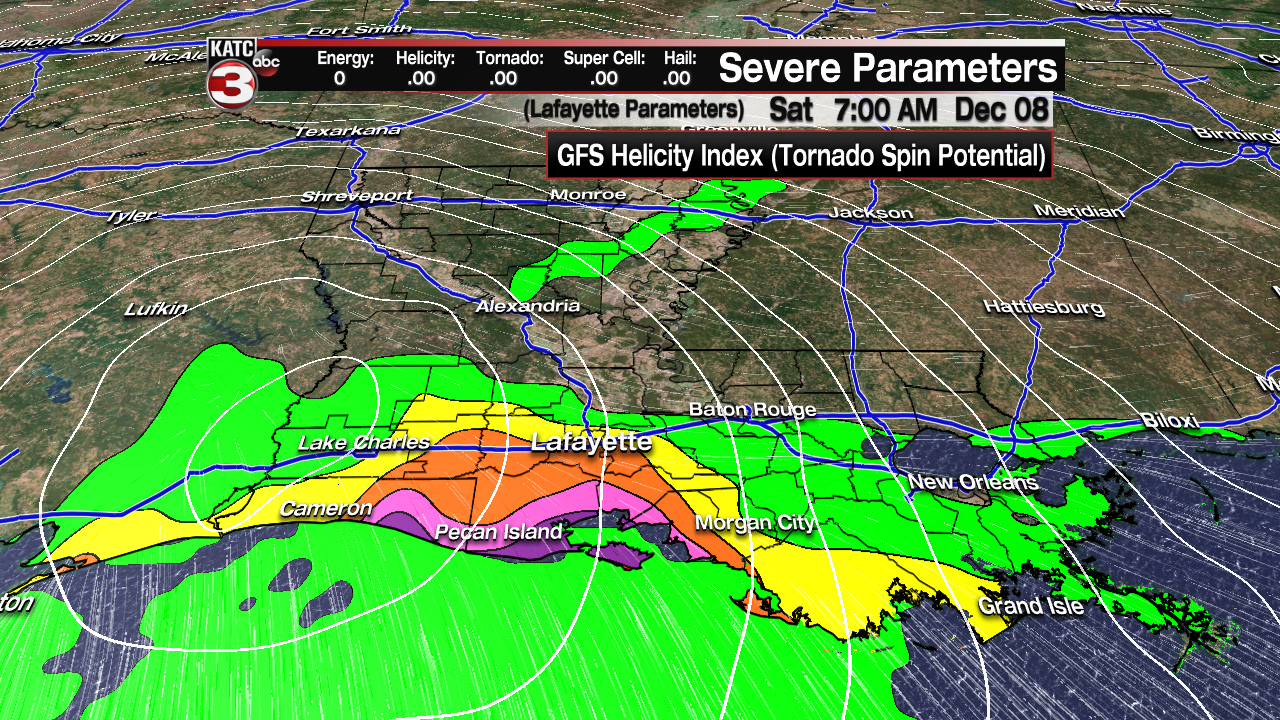 If any severe weather threat were to occur, it would be primarily be across the coastal parishes of Acadiana into Southeastern Louisiana. 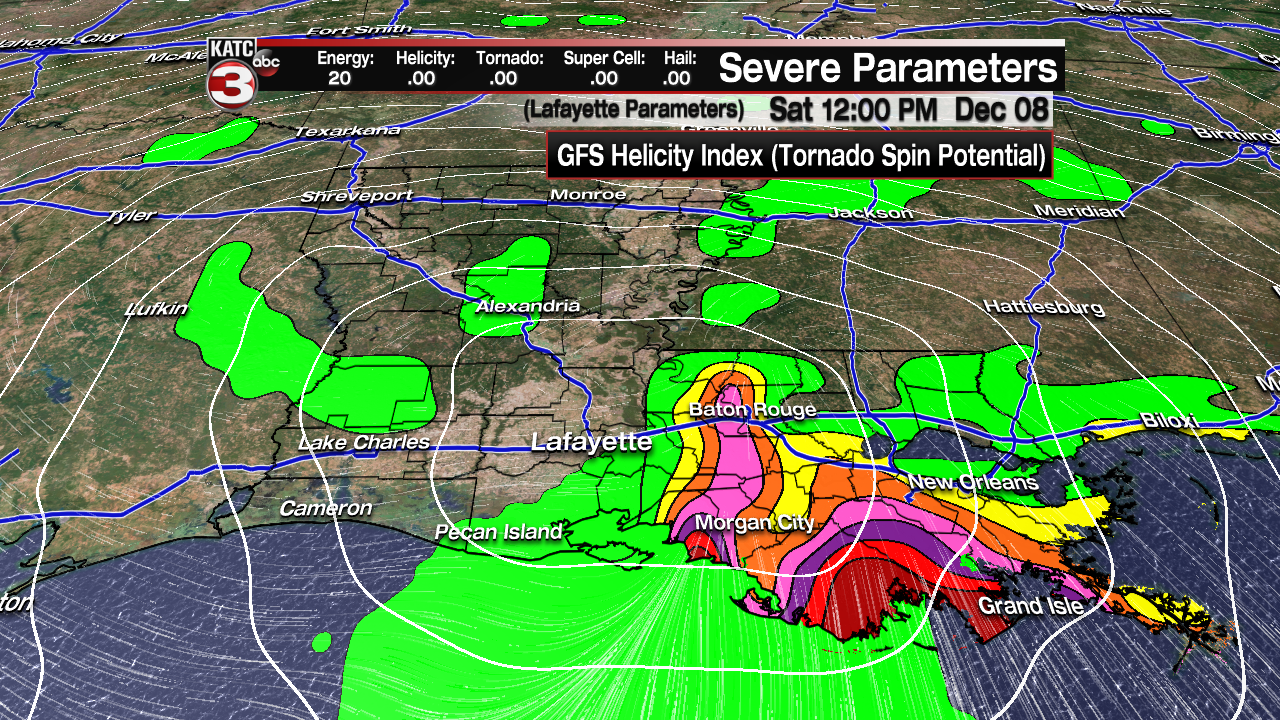 After a mild period through midday Saturday, behind the low, look for breezy and cooler conditions to follow with cloudy skies persisting all day Sunday.

Sunday will indeed be blustery and feel winter-like by Acadiana standards with highs staying in the 40s.

Skies will clear with chilly conditions early next week with our next chance of a frost possibly coming Tuesday morning.

Moderating temperatures and rain chances are likely to return by the end of next week, which could set up for a nice weekend to follow.