The chance of showers and storms will gradually increase for Acadiana into Friday afternoon, with a better chance of storms, some potentially severe, Friday night into early Saturday. 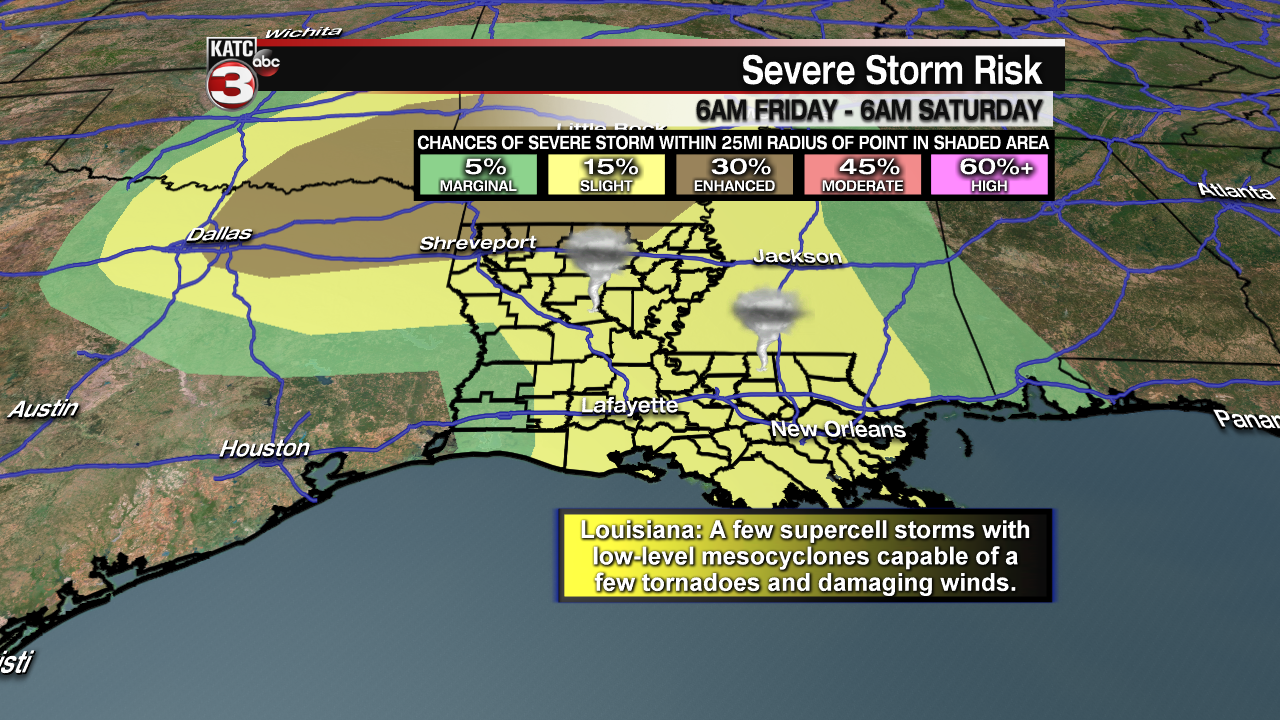 A vigorous low pressure system crossing the Rockies into the Plains States Friday will induce breezy southerly winds and allow for scattered showers and possibly a few storms into the afternoon for Acadiana. 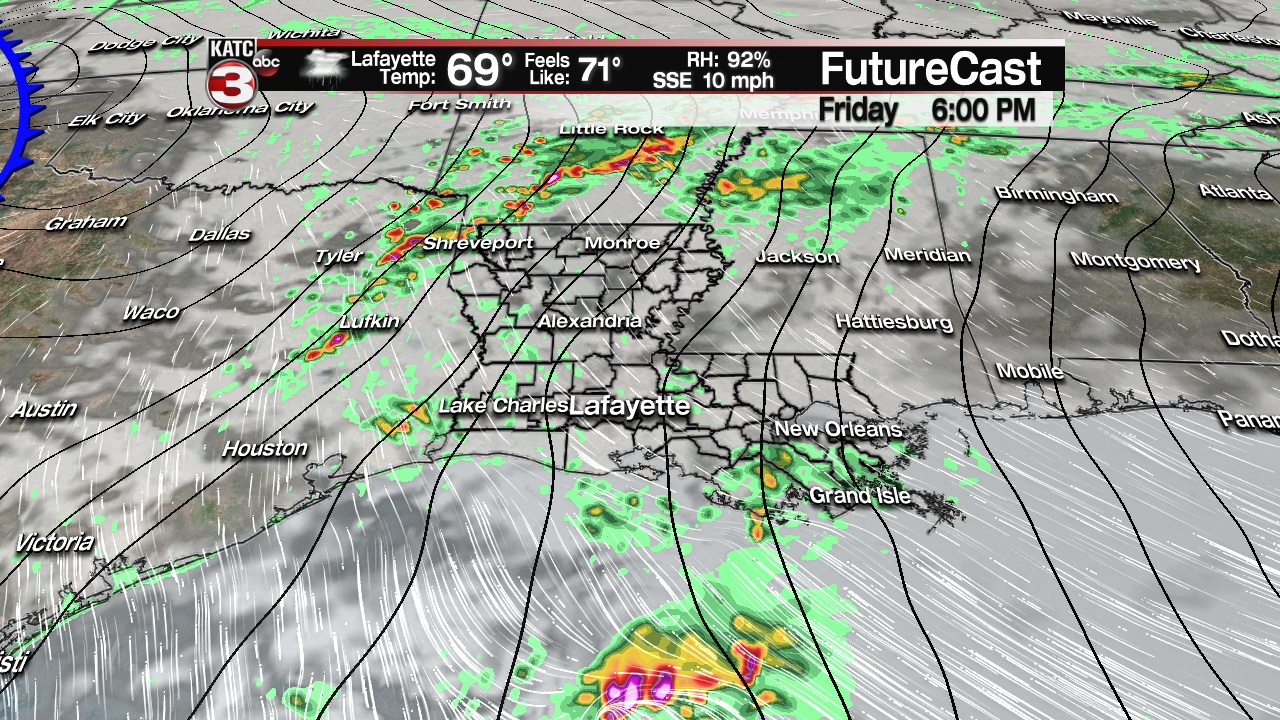 Rain chances are expected to increase Friday night into Saturday morning along with an increasing risk of severe weather dynamics Fduring the same time-frame. 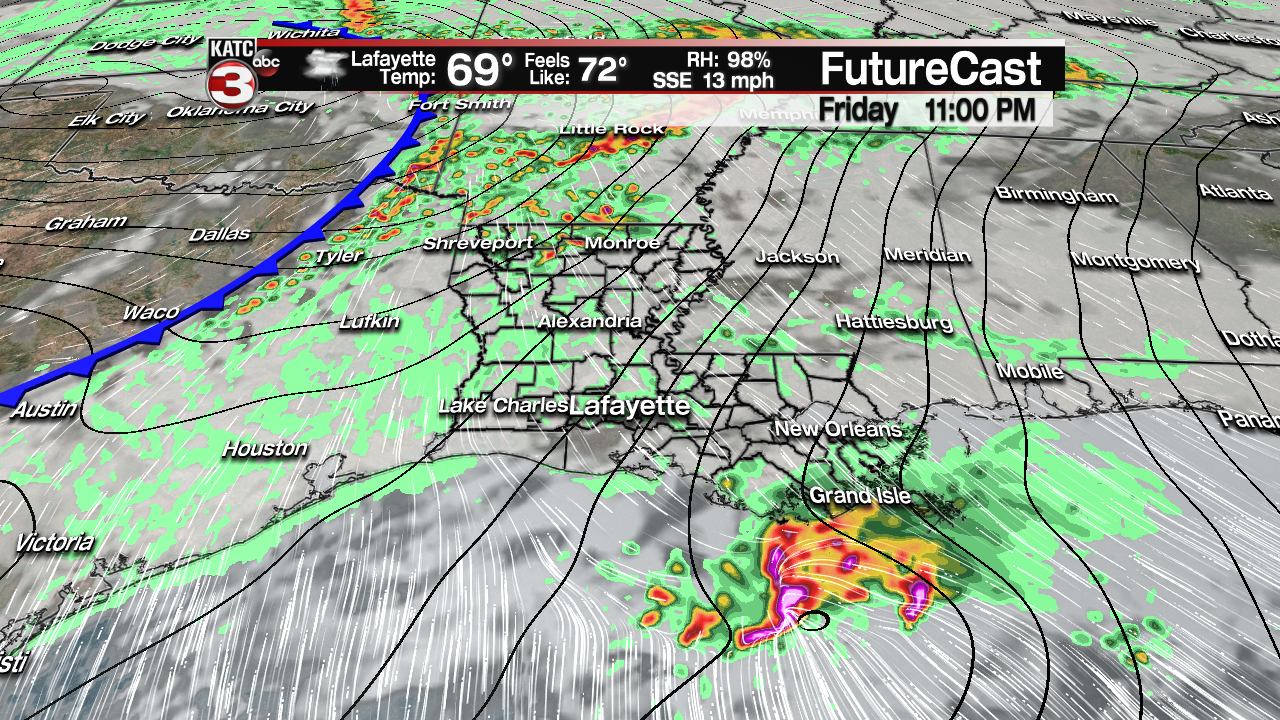 The Storm Prediction Center (SPC) has most of Louisiana and all of Acadiana hatched in for a “slight risk”, a level 2 out of 5, or 15% chance of severe storms Friday into Saturday morning. 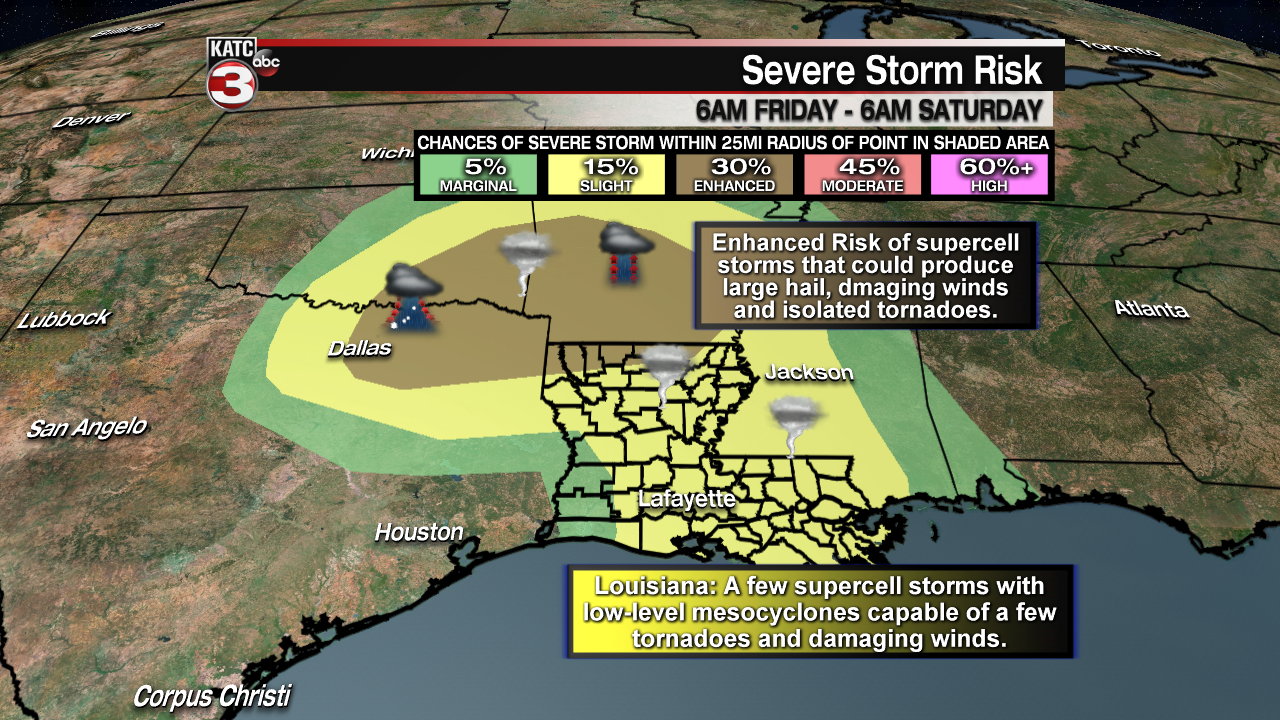 Per the SPC the primary risk for Southern Louisiana appears to be into Friday night where conditions may support “a few supercell storms with low-level mesocyclones capable of a few tornadoes” along with damaging winds. 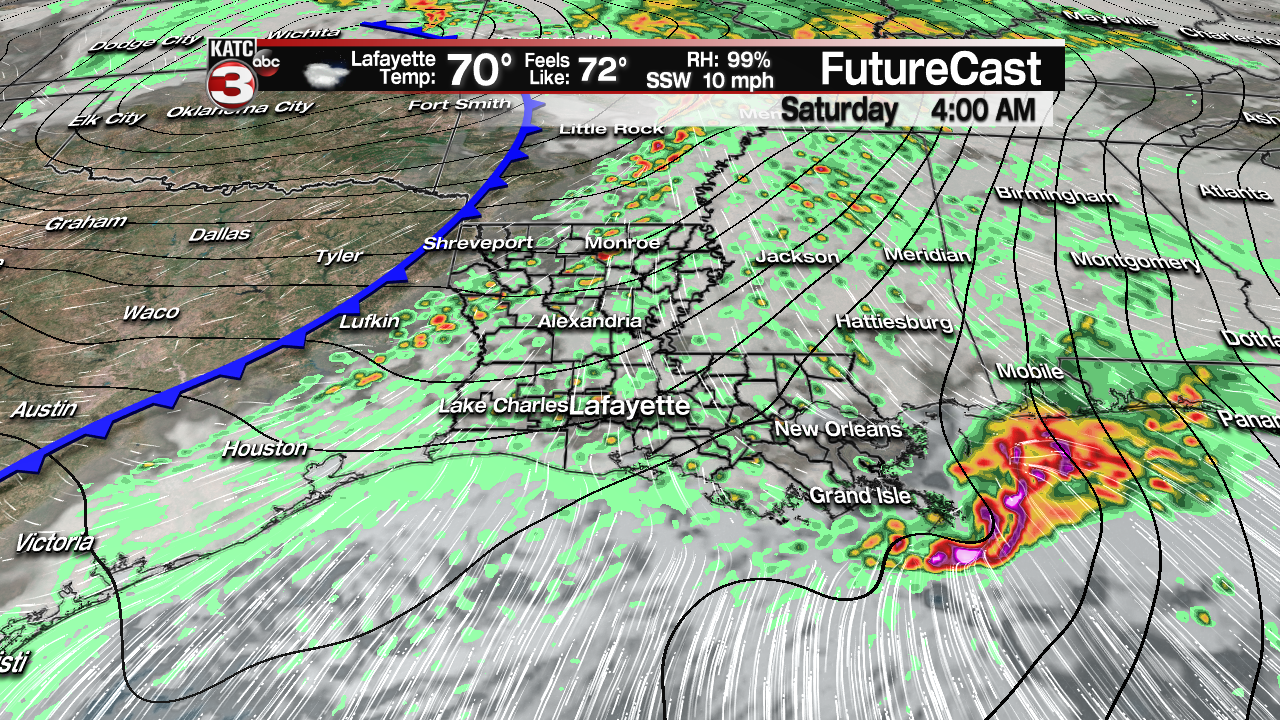 While the model is not likely right in the actual picture of what will occur exactly, this and other models do indicate that there will be enough dynamics in play for some sort of a credible isolated severe weather/tornado threat into the weekend. 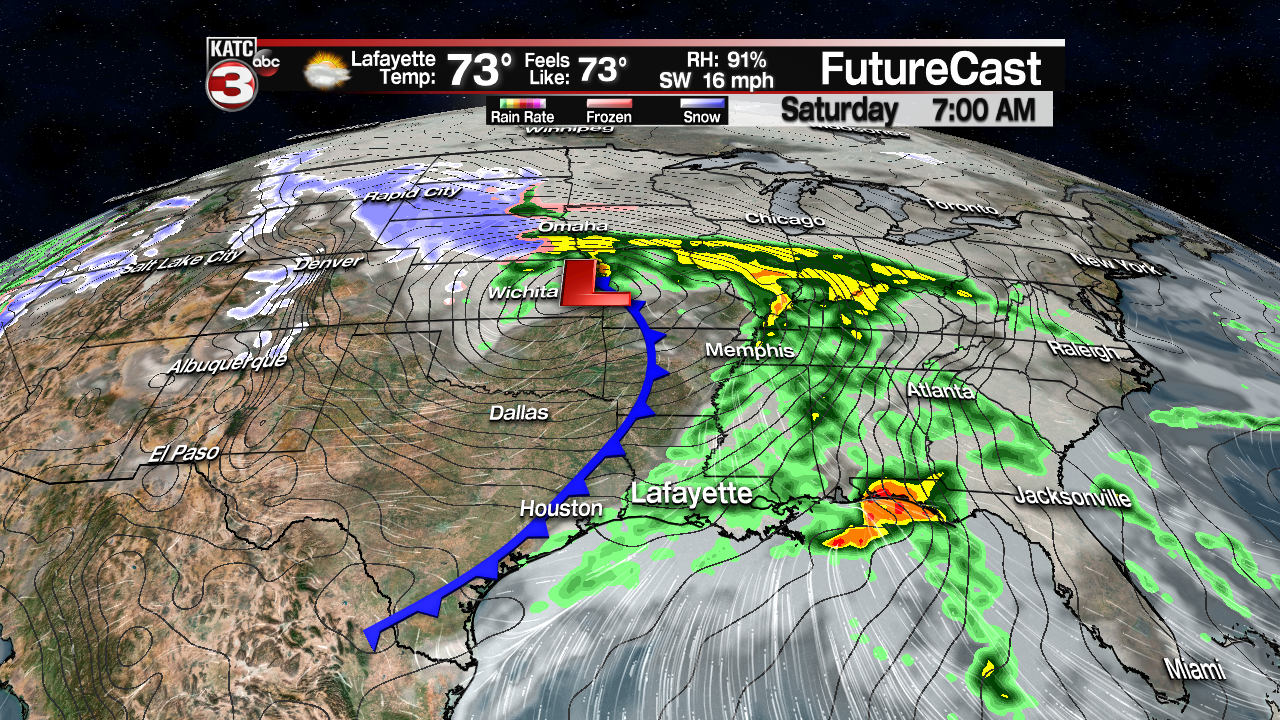 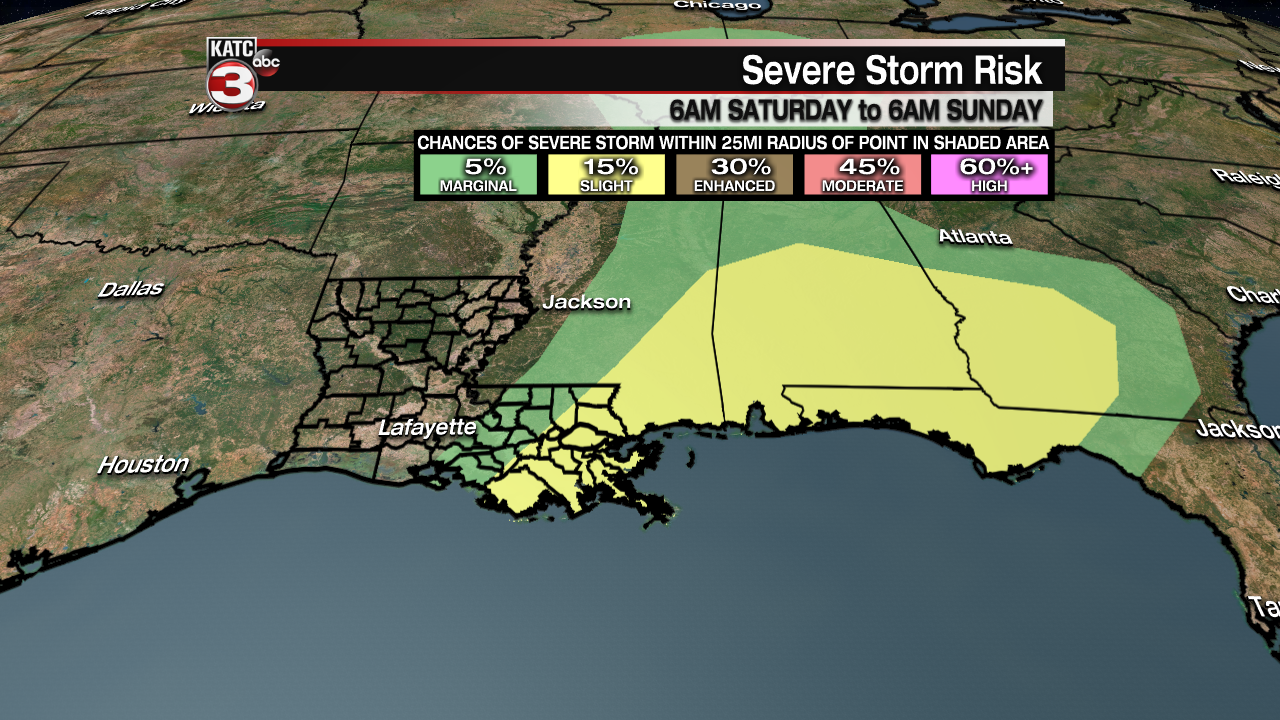 Rainfall is not expected to an issue with the thunderstorm activity Friday into Saturday with most cells moving rather quickly keeping most totals less than an inch across the region. 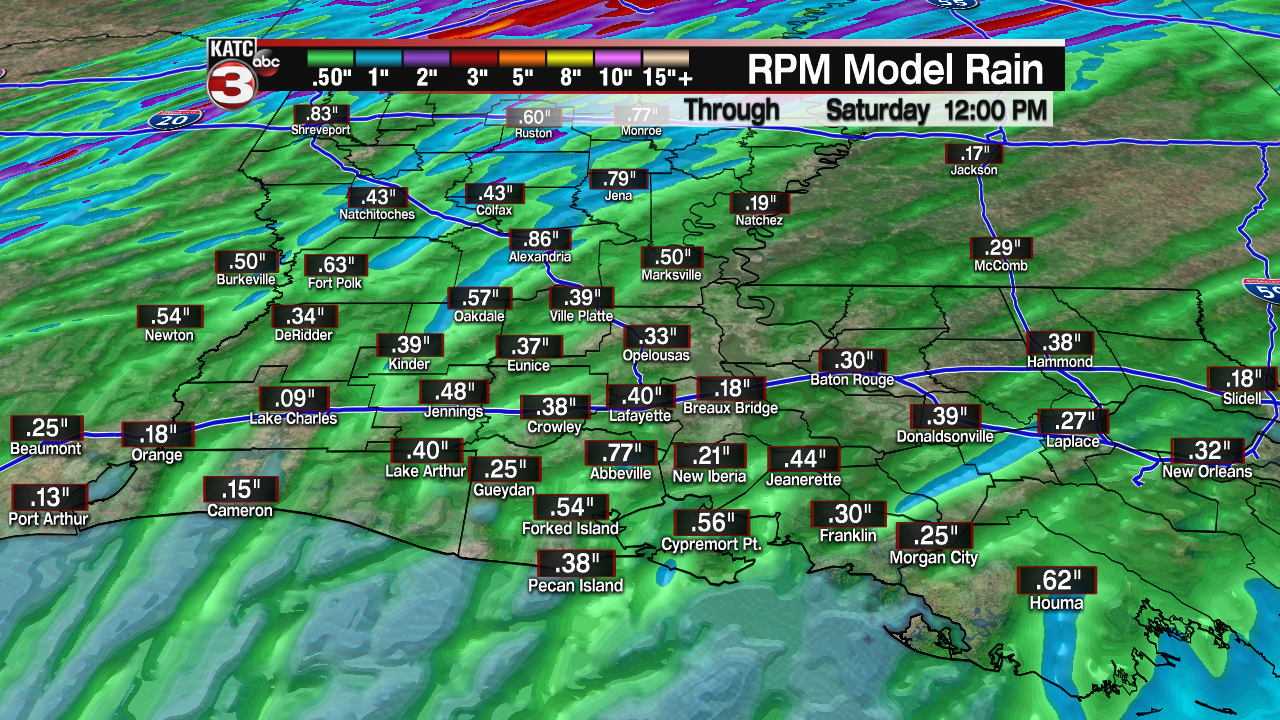 The weekend is looking rather spring-like however following this system with skies becoming partly sunny Saturday afternoon and mostly sunny Sunday. Highs this weekend will top out in the upper 70s to lower 80s before another chill down returns for mid-week. 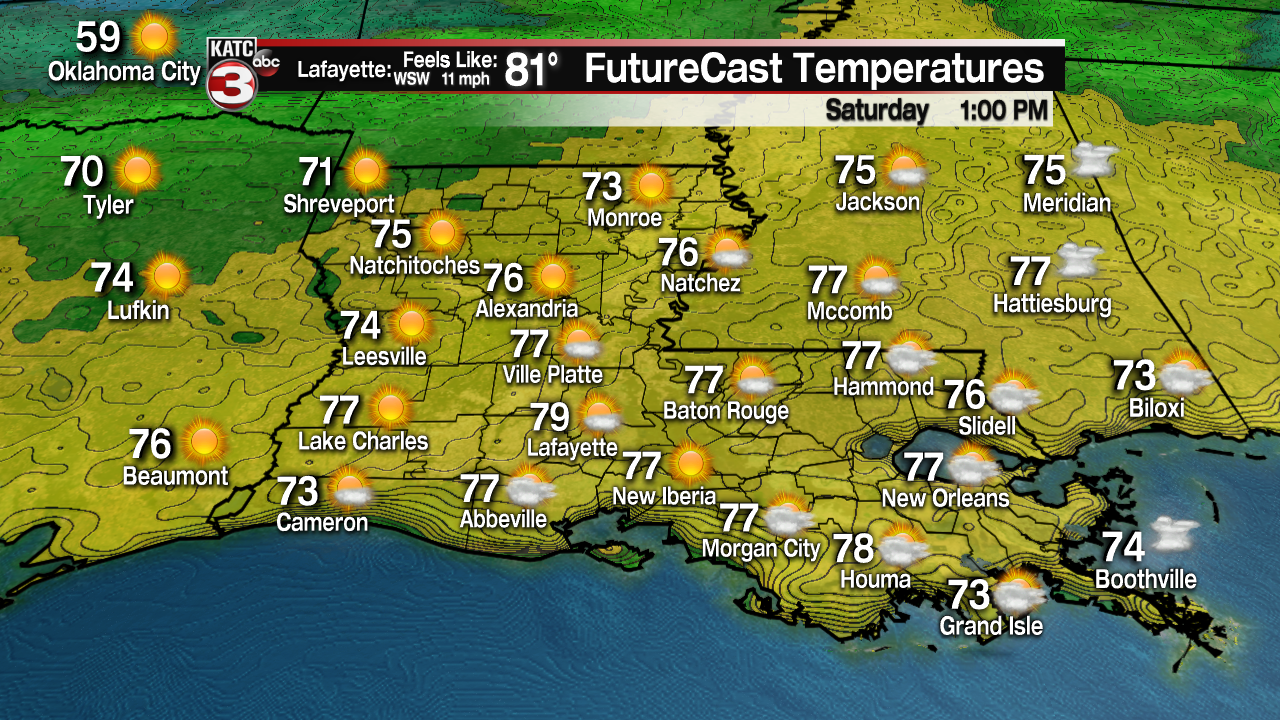 After a nice and cool mid-week period, Acadiana’s next weather-maker will look to arrive for next Friday, with rain and storms likely once again, and perhaps with another severe weather threat as well.

In the near term, expect balmy conditions for the area overnight into Friday morning courtesy of breezy southerly winds keeping temperatures closer to the upper 60s…which is normal for daytime highs for this time of year!

Highs Friday will be in the mid-70s.

This breezy winds become quite gusty from the south-southeast Friday near 16-25 mph with occasional gusts as high as 30 mph possible.

Stay with KATC for the latest on the severe weather potential Friday into Friday night, as there could be a few severe weather ‘watches’, mainly tornado, for portions of area/ at some point.