It will be the coolest weekend so far this Fall for Acadiana, with even colder air on the way next week…but in between, another healthy soaking is on the way late Sunday into Monday.

In the near term, it will be breezy and colder across the area into our Friday night with the chance of a few patches of light rain and/or misty sprinkles through midnight.

Thereafter, the clouds will gradually thin and begin to clear toward daybreak. 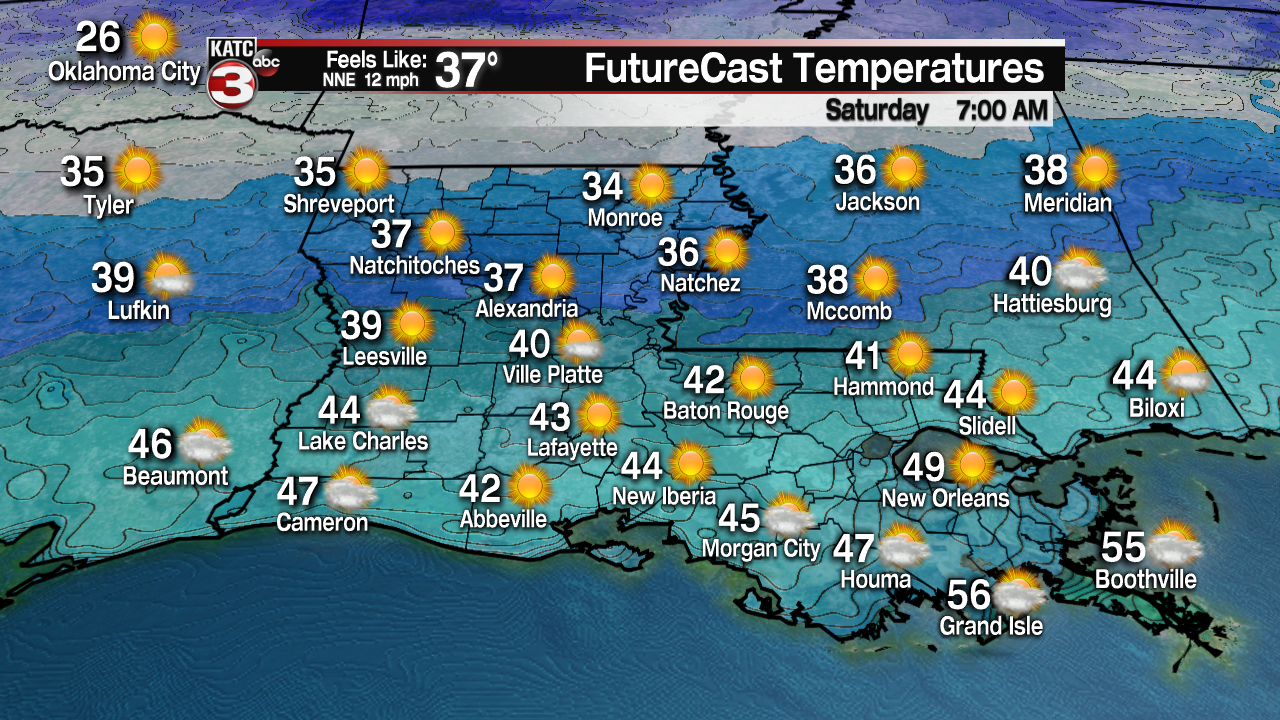 The main story will be the temperatures, that drop into the lower 40s by Saturday morning, and thanks to a stiff north to northeast breeze, wind chills will likely drop into the mid-upper 30s by morning.

Saturday will be a partly sunny and a cool day with mostly sunny skies anticipated for the morning hours, but by the afternoon, high and mid-level clouds should return. 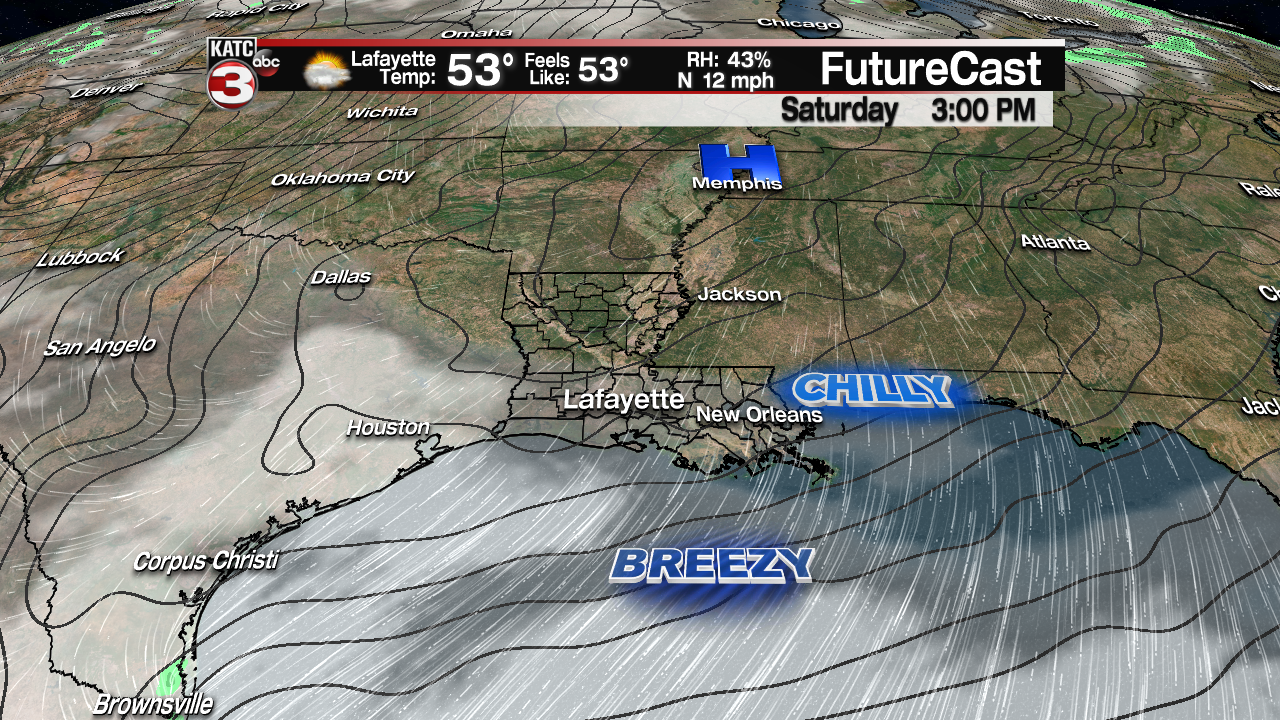 High temperatures Saturday will be in the mid-50s.

Sunday we’ll likely see overcast skies with the chance of showers developing by the afternoon ahead of storm system that will be developing in the Western Gulf of Mexico. 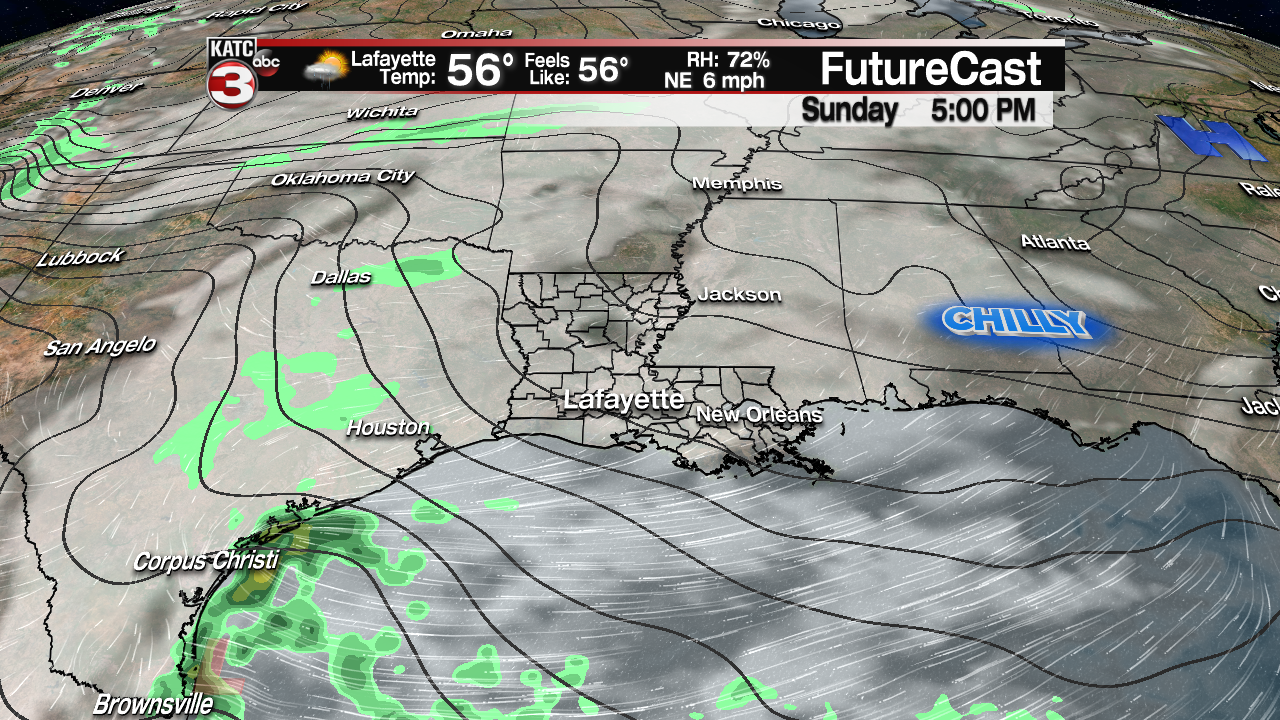 High temperatures Sunday should be in the mid- to possibly upper 50s.

An area of low pressure will advance northeastward toward Louisiana Monday bringing with it a near 100% chance of rain and embedded storms Sunday night into Monday. 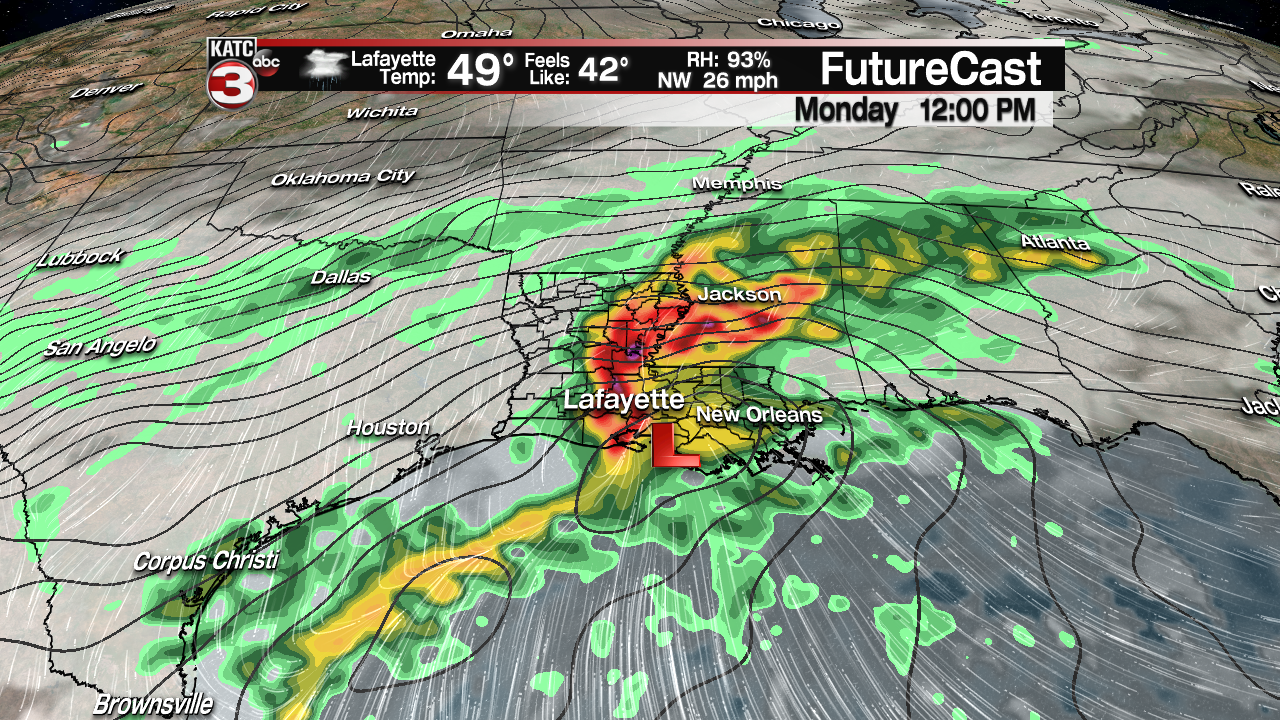 And as it has seemed with every system of late, look for a good soaking with a 1-3″ rainfall a solid bet at this point. 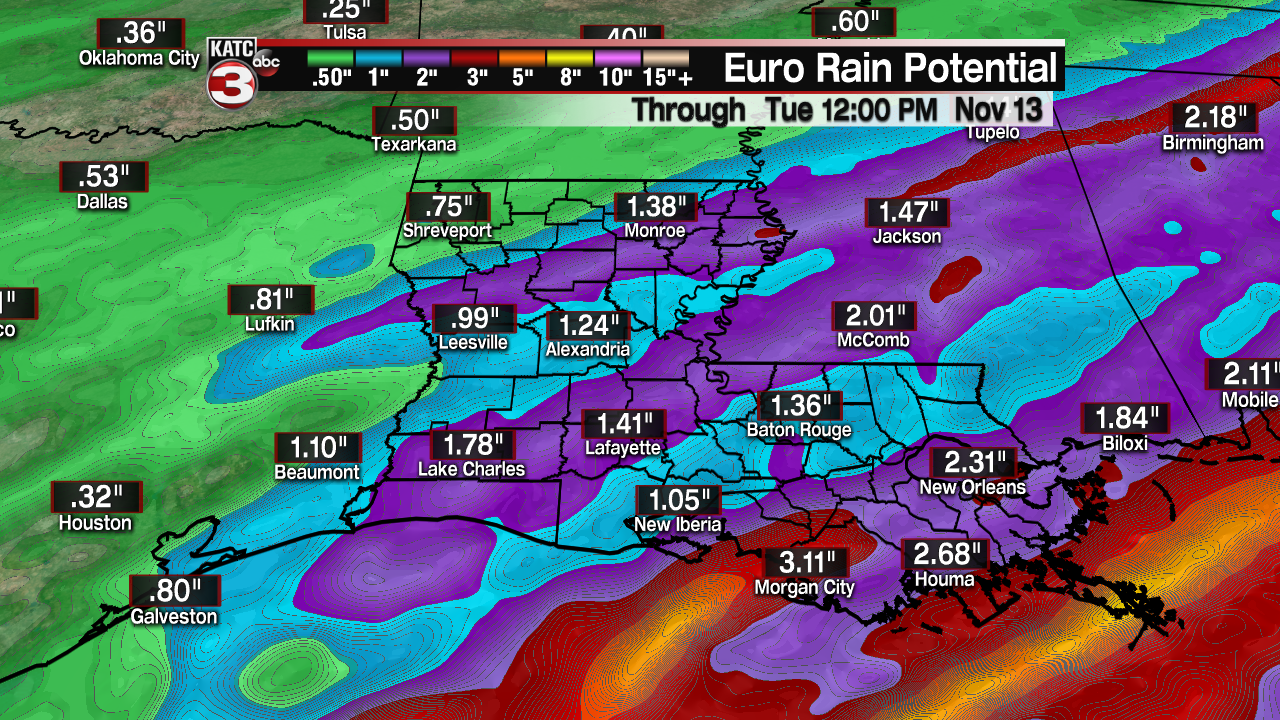 While the European Model is a little lower on the rain estimates, the GFS Model is more liberal on the rain totals, and of late, the GFS has been the better performing model in the 2-4 day time frame on rainfall. 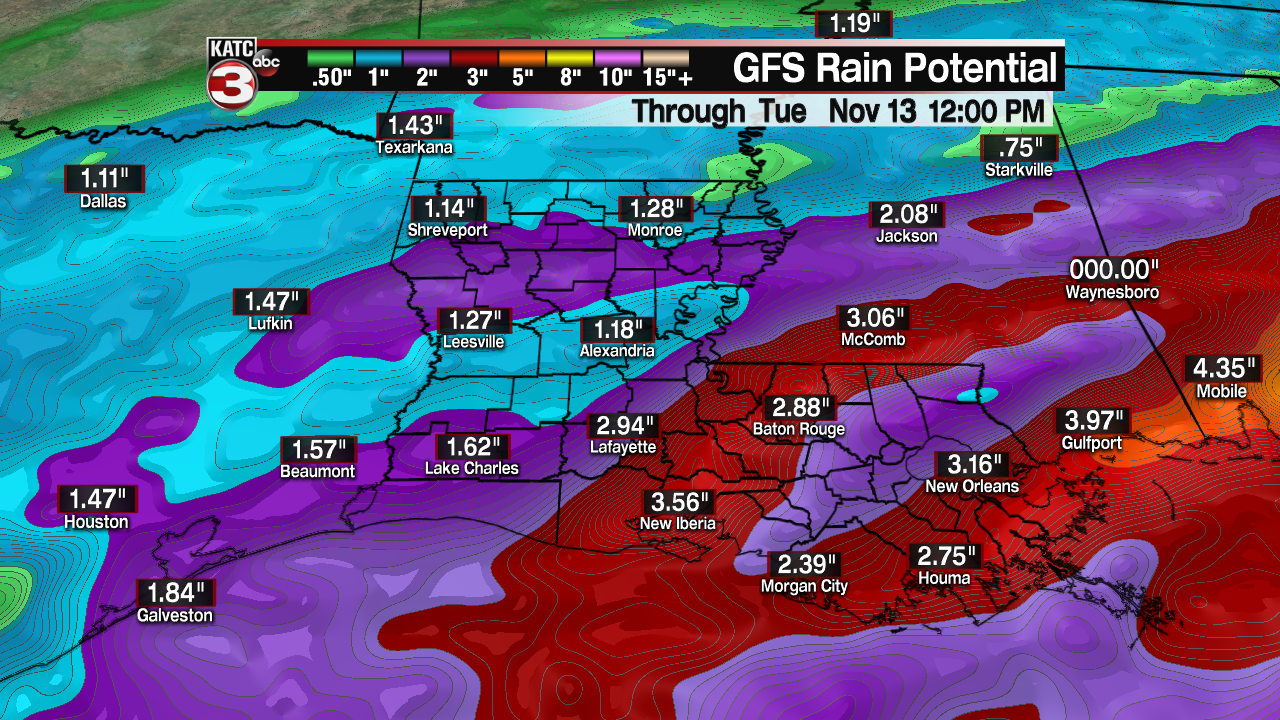 In addition to a marginal risk of excessive rainfall into Monday, there may also be a marginal risk of a few severe storms, especially near the coast and toward Southeast Louisiana, ultimately depending on the track of the low pressure system.

If any severe weather threat should materialize into Monday, it would likely be for strong, gusty winds and the possibility of some hail.

After Monday’s wet weather, much colder air will be advancing toward the Gulf Coast with the coldest readings of the season likely for mid-next week.

Cloudy, breezy and cold weather will follow for Tuesday, with some breaks in the clouds possible as early as the afternoon, but most probably not occurring until Wednesday morning.

Highs Tuesday are not expected to make it out of the 40s! 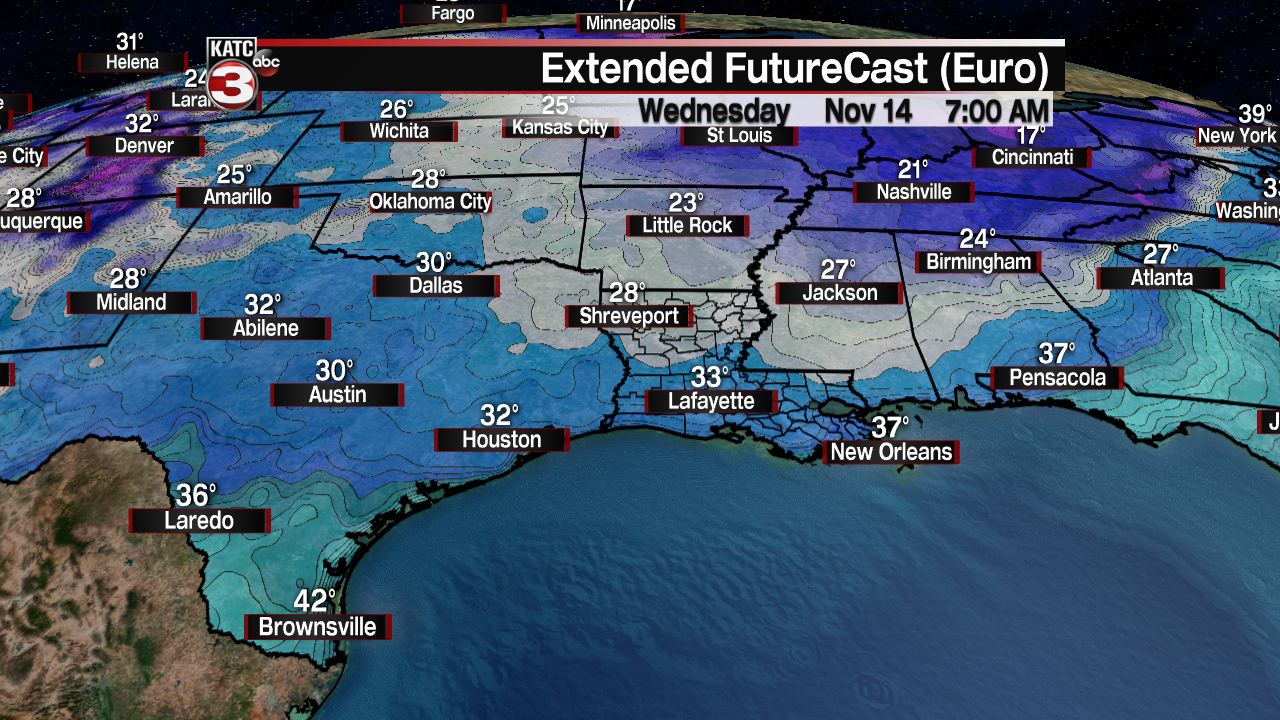 Then look for temperatures to approach the frost or freeze zone for the next several nights, with morning readings in the low-mid 30s likely for Wednesday, Thursday and perhaps Friday mornings. 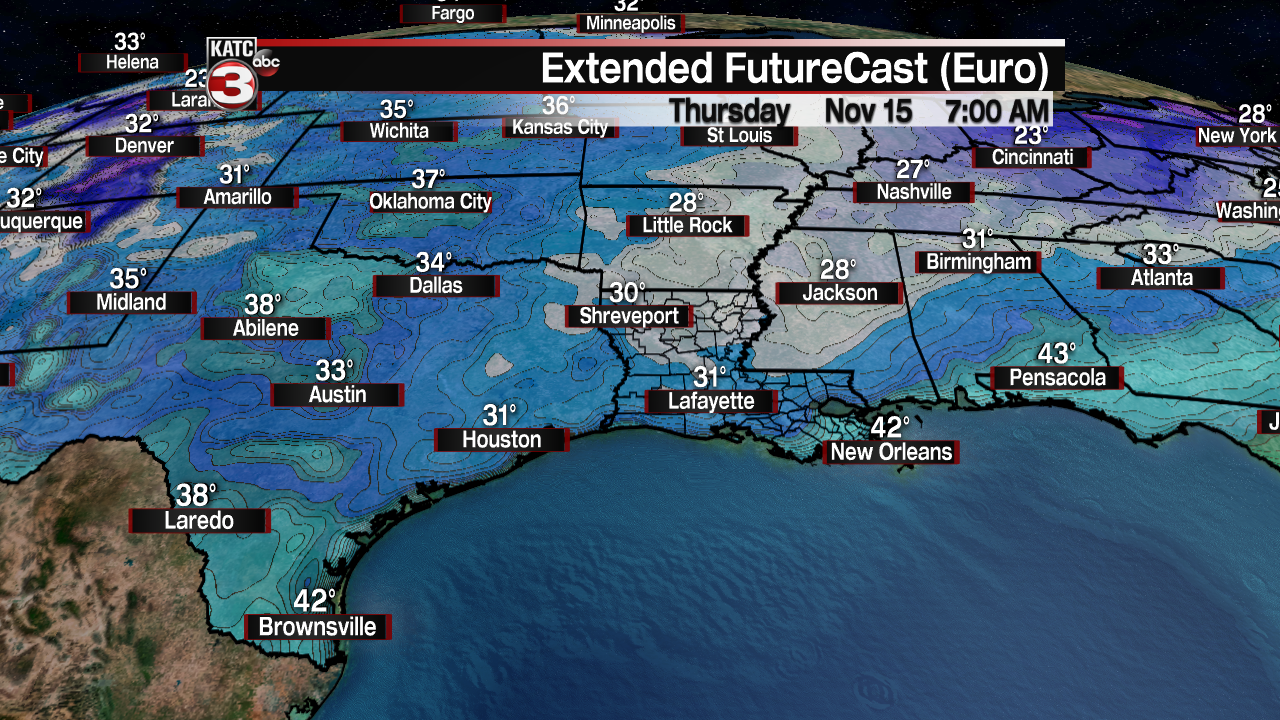 This will not be a pipe-busting cold, but it will be a killing frost or freeze for our gardens and tender vegetation.

It should stay nice and dry after Monday’s rain for at least a week, and do look for milder temperatures to return for next weekend.