High pressure over the southeast will keep the weather generally hot and humid today, holding the fall like conditions over the middle part of the country. We managed to climb to 92 degrees here in Lafayette yesterday, and similar conditions are expected today. With dew points remaining in the low to mid 70s, expect the heat index to climb above 100 degrees again this afternoon. Rain chances will primarily remain along the coast during the pre dawn hours, and perhaps one or two showers will develop this afternoon. Rain chances will hold at just 10%. 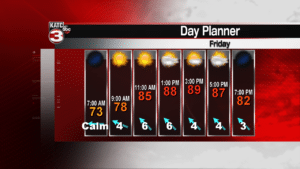 A weak wave will move westward across the Gulf of Mexico Saturday. This along with a deepening trough over the western half of the United States will tap into the Gulf and Caribbean moisture. This flow will allow better chances of rain and thunderstorms this weekend and through much of next week. Expect generally afternoon storms on Saturday, with showers and storms occurring any time of the day Sunday.

We’ll monitor the western Caribbean over the weekend where a disturbance now has a 20% chance for development today and up to a 60% chance for becoming a tropical depression this weekend or early next week. Usually tropical systems that develop near Central America and the Yucatan during the month of October will drift northeastward toward Cuba and Florida. As the fall season kicks in, usually there’s more of a dip in the jet stream over the western half of the country allowing cold fronts to sweep toward the Gulf of Mexico. That hasn’t happened yet, and a strong ridge of high pressure over the southeastern U.S. has prevented these fronts from moving into the south. These troughs also tend to steer tropical systems away. Unfortunately it appears the western trough may not deepen enough to prevent a tropical system from entering the central Gulf.

As far as any strengthening and direction of movement, the Euro Model is continuing to develop a system and move it toward the northern Gulf Coast. Then it appears to stall the system offshore before a deeper trough next weekend pulls the system inland and finally brings some cooler air into the region. The GFS model is similar, but not as robust on development. Continue to monitor this over the weekend, as it may bring unsettled weather next week. Models do trend toward a more seasonal pattern in the next couple of weeks, so hopefully we’ll finally get that taste of fall we’ve all been longing for!