The weather will continue to feel more like early September rather October over the next several days with highs topping out n the lower 90s while rain chances stay near 20% or less through Friday.

An increase in tropical moisture, currently by the Bahamas, will cross into the Gulf and reach the region Saturday engendering a better chance of scattered showers and thunderstorms.

Beyond the weekend, while looking initially drier early in the week, deeper tropical moisture will likely begin to take up residence in the Gulf of Mexico, eventually bleeding into Louisiana and leading to higher rain chances mid-late next week.

There remains a fair bit of uncertainty with a disturbance that will be festering in the Caribbean through the weekend but edging toward the Gulf of Mexico next week.

The National Hurricane Center (NHC) has maintained a 30% chance of development of the disturbance in the Western Caribbean Sea to slowly develop over the next 5 days as it drifts northwestward. 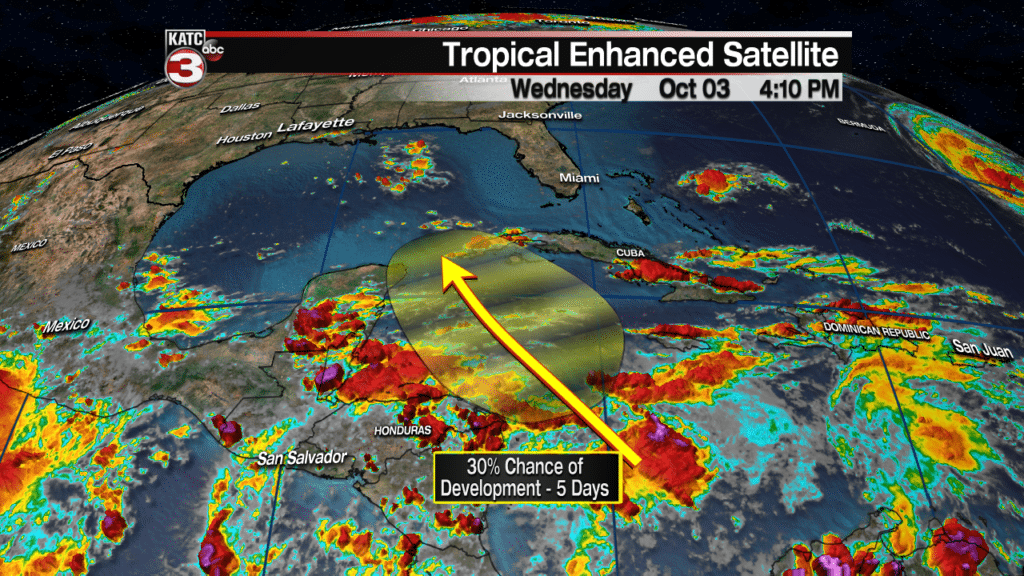 Both the Euro and GFS models were in fair agreement Wednesday with broad low pressure working its way into the southern and western portions of the Gulf of Mexico next week.

Neither model is showing significant development, but the feature (and its deep tropical moisture) may fester in the Gulf of Mexico for days…perhaps up to a week. 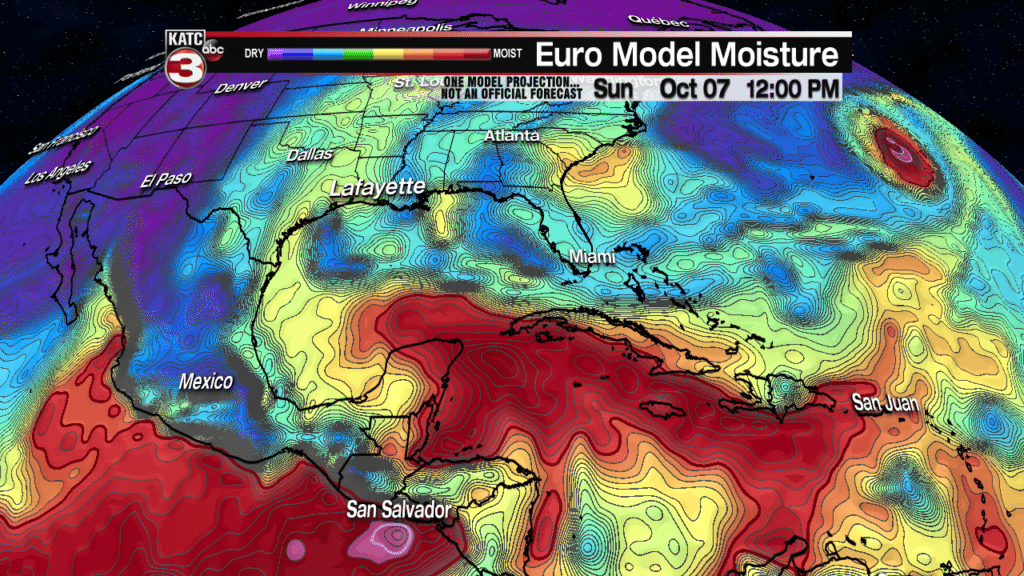 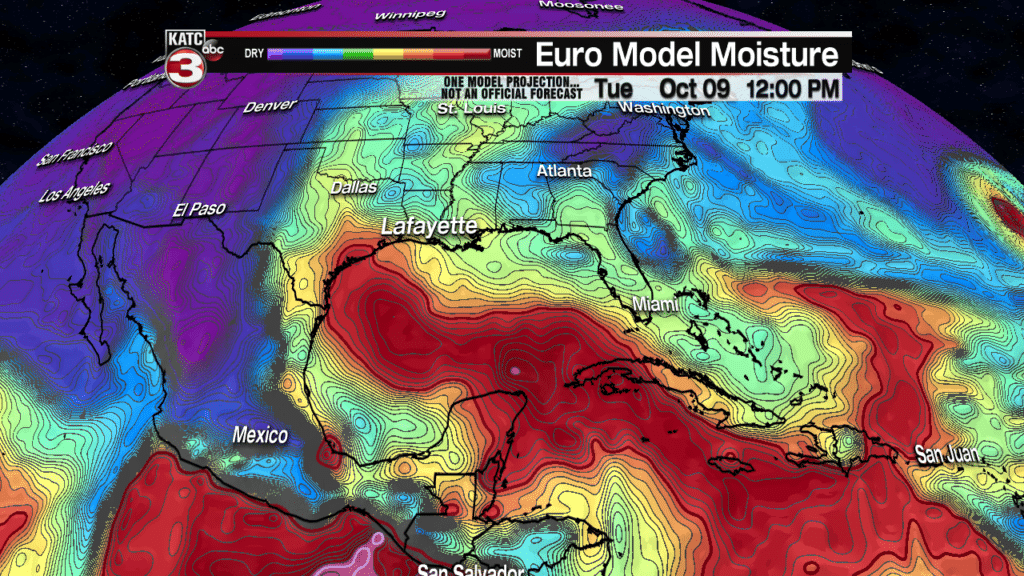 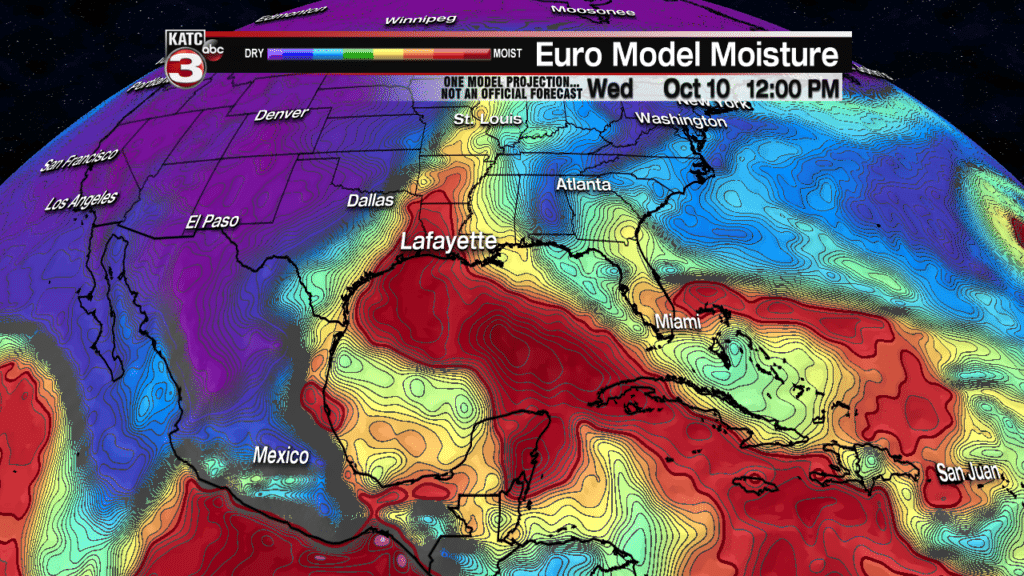 No major concerns at this time for Louisiana with regard to the disturbance, but do look for increasing prospects of showers and storms locally especially for next Wednesday and Thursday.

But as always, what happens in the real world compared to what computer models say, can often be two different things so the disturbance will continue to be monitored closely.

Elsewhere in the tropics, Leslie has become a nearly stationary hurricane in the middle of the Atlantic.

The system will make a northward run before weakening and turning eastward…Leslie should not be a threat to any land areas. 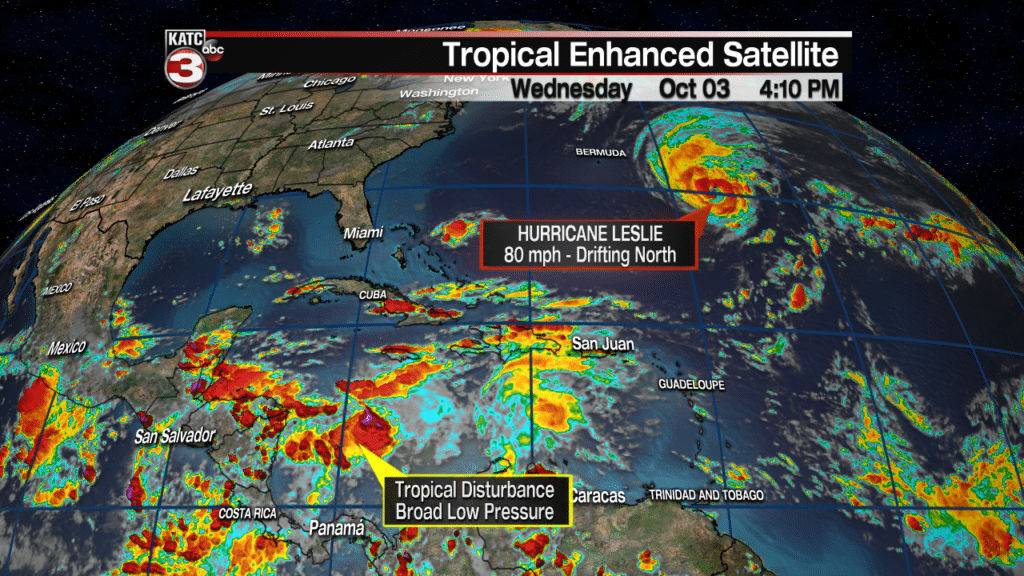 Finally in the “where’s that first fall cool front?” front. The GFS model is optimistic for a possible front the weekend of the 13th/14th. but the Euro is not having any of it…(and is not recommending any gumbo), and on that front, the Euro has been more accurate over the last several weeks.

So here’s to a front perhaps showing up in the 3rd week of October…or by Halloween the way it’s going!