A slow moving cool front is draped over east Texas today and will drift over Southwest Louisiana on Sunday sparking off another round of scattered showers and thunderstorms during the afternoon. 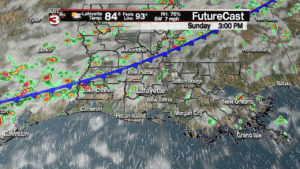 Before the rain arrives we will start off the day with peeks of morning sunshine warming temperatures into the upper 80s and with all the moisture in the atmosphere it will feel more like the upper 90s.

Sunday night the front will slide out over the Gulf but Monday afternoon the front will swing back over Acadiana as a stationary front producing more hit or miss showers and thunderstorms. 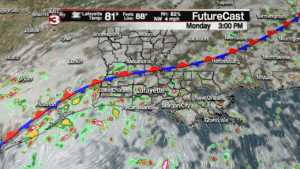 Like the pass couple days a few of these showers could be on the heavy side but they should not last long enough to cause any flooding concerns.

Tuesday this front will begin to weaken to just a weak trough but that will still create enough instability to keep rain chances up near 50%.

For the second half of the work week we will go back to a typical summertime pattern with high pressure to our east bringing a ESE flow which will drop rain chances down to 30-40% for just a few pop-up showers and storms each afternoon.

As the rain chances go down a little we are able to get a bit more sunshine throughout the day allowing temperatures to rise into the upper 80s and lower 90s.

Out in the Atlantic Tropical Storm Florence is starting its strengthening cycle again as sustained winds are back up to 70 mph. 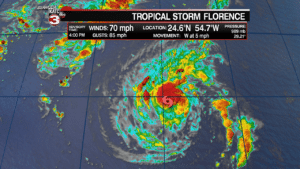 With the wind shear relaxing and Florence moving over very warm water it will quickly strengthen to a hurricane and then become a major hurricane early next week.

The official track by the National Hurricane Center now has Florence making landfall somewhere along the Carolina coast as a powerful category 4 hurricane with sustained winds of 140 mph. 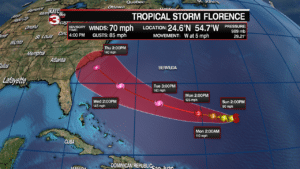 And after making landfall Florence is expected to slow down drastically and maybe stall out over the East Coast creating the possibility for widespread inland flooding too.

Off the west coast of Africa Tropical Storm Helene is also getting better organized today and could become a hurricane Sunday afternoon. 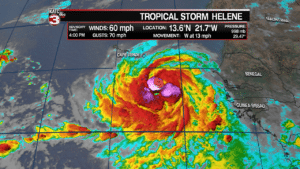 Tropical storm warning and hurricane watches have been issued for the southern Cabo Verde Islands as Helene will slide just to the south of the islands but they will still see gusty winds and heavy rains this weekend.

The good news is Helene should then turn off to the north and stay out over the Atlantic. 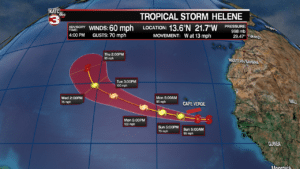 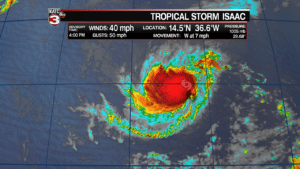 Isaac is fighting drier air but will slowly gain strength up to a hurricane by early this week.

With Helene to its north that will steer Isaac due west across the Atlantic making it a storm we will have to watch closely. 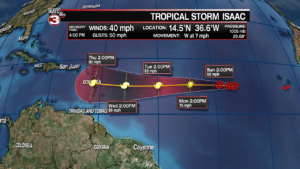 Next Thursday Isaac is projected to make landfall near Dominica in the Lesser Antilles Islands as a category 1 hurricane with 80 mph winds.

Once it moves out into the Caribbean Sea that is when we will really have to pay attention as it could head for the Gulf but right now the long range models keep Isaac farther south and have it heading for Central America.