Our latest system to develop in the Atlantic is Potential Tropical Cyclone Eight just off the west coast of Africa. 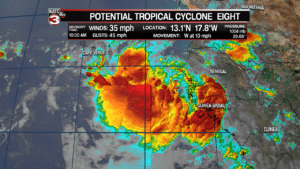 As of 10AM Friday the system had sustained winds of 35 mph and is beginning to form a closed circulation but is still lacking a few tropical characteristics to be called a tropical depression.

Later this afternoon the system is expected to strengthen and become Tropical Storm Helene. 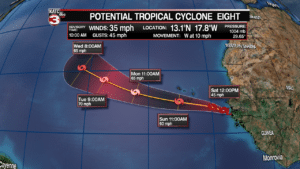 Tropical storm warnings have been issued for the southern Cabo Verde Islands as they are likely to experience tropical storm force winds of greater then 40 mph and heavy rainfall in the next 36-48 hours.