Gordon weakens to a depression; Locally a beautiful day

Tropical Storm Gordon made landfall last night near the Alabama-Mississippi border as a strong tropical storm with 70 mph causing lots of power outrages along the coast and a 3-5 foot storm surge on Dauphin Island and along Mobile Bay.

Since then Gordon has weakened to a tropical depression as it moves up through Mississippi and heads for Arkansas this afternoon.

Although winds are dying down Gordon will still bring lots of rain across portions of Alabama, Arkansas, Florida and Mississippi today as flash flood watches have been issued for areas in the path of the system.

Eventually what is left of Gordon will combine with a frontal system over the central plains on Thursday and Friday causing it to produce more heavy rain for the Midwest this weekend.

Locally, we are on the back side of Gordon meaning we will see a nice, sunny day as drier air gets pumped down into Acadiana. 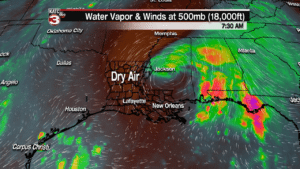 All that sunshine will warm temperatures to near 90 degrees but with the dry air it will still feel fairly comfortable this afternoon. 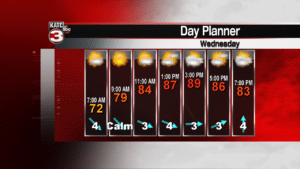 Thursday as Gordon works through Arkansas and up into Missouri the storm will send us a decent chance(60%) for scattered showers and storms during the afternoon. 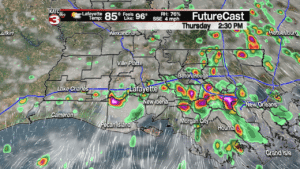 Rain chances will remain up on Friday as what’s left of Gordon combines with the front and will send enough instability our way for hit or miss showers and storms to fire up throughout Acadiana.

This weekend that front and associated moisture will slowly try to work closer to Acadiana so we will keep rain chances near 40% both Saturday and Sunday but it will not be a wash out with times of partly sunny skies and highs in the upper 80s.

Looking ahead to next week we go back to a more typical late summer like pattern with a 30-40% chance for pop-up showers and storms each afternoon, otherwise we will have a mix of sun and clouds with highs in the upper 80s and lows in the low 70s.

In the Atlantic basin Hurricane Florence has strengthened to a major category 3 storm with 120 mph sustained winds making it the first major hurricane of the 2018 season. 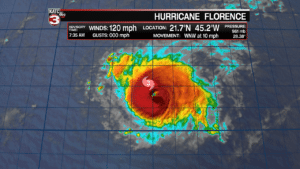 Over the next 5 days Florence will remain a powerful system out over the open water of the Atlantic as it heads for Bermuda. 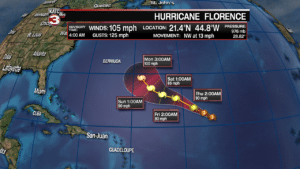 Beyond 5 days some models have Florence tracking towards the East Coast by the end of next week but that is still 10 days out so a lot could change but something we will be watching.

Also, in the western Atlantic the National Hurricane Center is monitoring a couple tropical waves near the west coast of Africa and one is already beginning to show signs of developing a circulation. 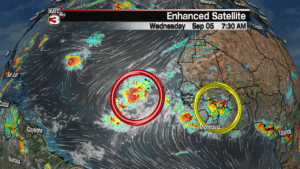 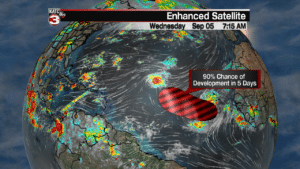 If it strengthens into our next tropical system it would be named Helene.

The other wave is still over Africa and the center is giving it a 20% chance of development once it moves out over the ocean in the next 5 days.

Thus, things look to remain very active in the tropics this month so make sure you are getting your updates from trusted sources like KATC and don’t believe the hype that you might see on social media of people posting one model run of a potential powerful storm hitting somewhere 10 days out as most models are fairly inaccurate pass 5 days.