​A cold front will be moving across the region today. Scattered showers and thunderstorms are expected to continue to develop along the front and move southward today. Already we’ve seen some scattered storms over central Louisiana, and those will drift over northern parts of Acadiana during the early part of the day Tuesday. As daytime heating kicks in, more storms will develop during the midday and early afternoon hours. 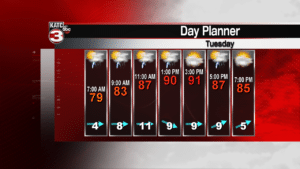 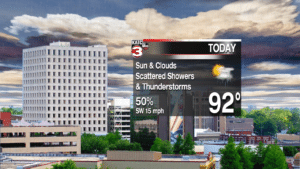 You probably won’t feel the effects of the front today, even with winds starting to shift northward this evening. Drier air will filter in overnight into early Wednesday. By Wednesday afternoon, dew points are expected to drop just below 70 which should give you the appearance that things have dried out.

It will still remain warm through the mid week, even with the front sliding into the Gulf of Mexico. Temperatures are expected to stay in the low to mid 90s. With the lower humidity, the heat index should remain at or below 100 degrees through Thursday. The front will continue to wash out toward the end of the week and southerly winds will return. This should elevate the humidity by the weekend, and typical afternoon showers and storms will return. Heat index values will climb back into the 100-105 degree range. Next week looks pretty normal for late August. Temperatures in the low to mid 90s with chances for afternoon showers and storms each and every day.

Tropical weather remains quiet as we push into the busiest time of the season. Nearly three quarters of all tropical systems occur between now and the first week in October. The peak of the season is around September 10th.