Quiet weather into the weekend, changes next week

Typical early June weather will continue into the weekend for Acadiana with mostly sunny and hot  conditions along with suppressed rain chances.

Look for highs Friday and this weekend in the lower 90s while overnight lows bottom out in the low-mid 70s. 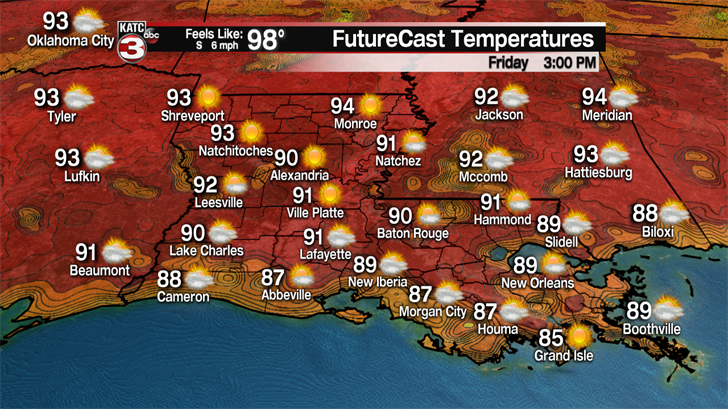 Rain chances will stay less than 10% through Saturday, but could improve to 10-20% Sunday afternoon.

Prospects of scattered afternoon showers and storms should improve into next week, especially for the mid-week period as high pressure to our west retreats enough to allow more in the way of tropical moisture to drift into the region from the east and south.

All in all the weather pattern looks to stay right on track for the time of year as seen in the 10 Day Forecast, although the GFS Model has been hinting at the possibility of some sort of tropical system emanating from the Western Caribbean and drifting toward the East-Central Gulf of Mexico later next week.

Meanwhile the European Model is ambivalent to any development, so for now we’ll just keep an eye on things…but if you remember, the GFS sniffed out Alberto days before the European model did, so the GFS cannot be discounted at this time.

Meanwhile in the Eastern Pacific, Aletta gained excellent satellite representation of a tropical system Thursday and has become the first hurricane of the Pacific season.

The storm will not affect land nor people, and is only newsworthy because it’s the first of the year…another tropical system looks to develop in the Eastern Pacific behind Aletta, which could impact portions of the Western Mexican Coast down the road.