After a rainy and yucky start to the Memorial Day weekend the showers should begin to fade out across Acadiana later this evening.

Sunday we should have more dry periods with a mix of sun and clouds but I won’t rule out a few scattered showers/storms in the late morning & early afternoon. 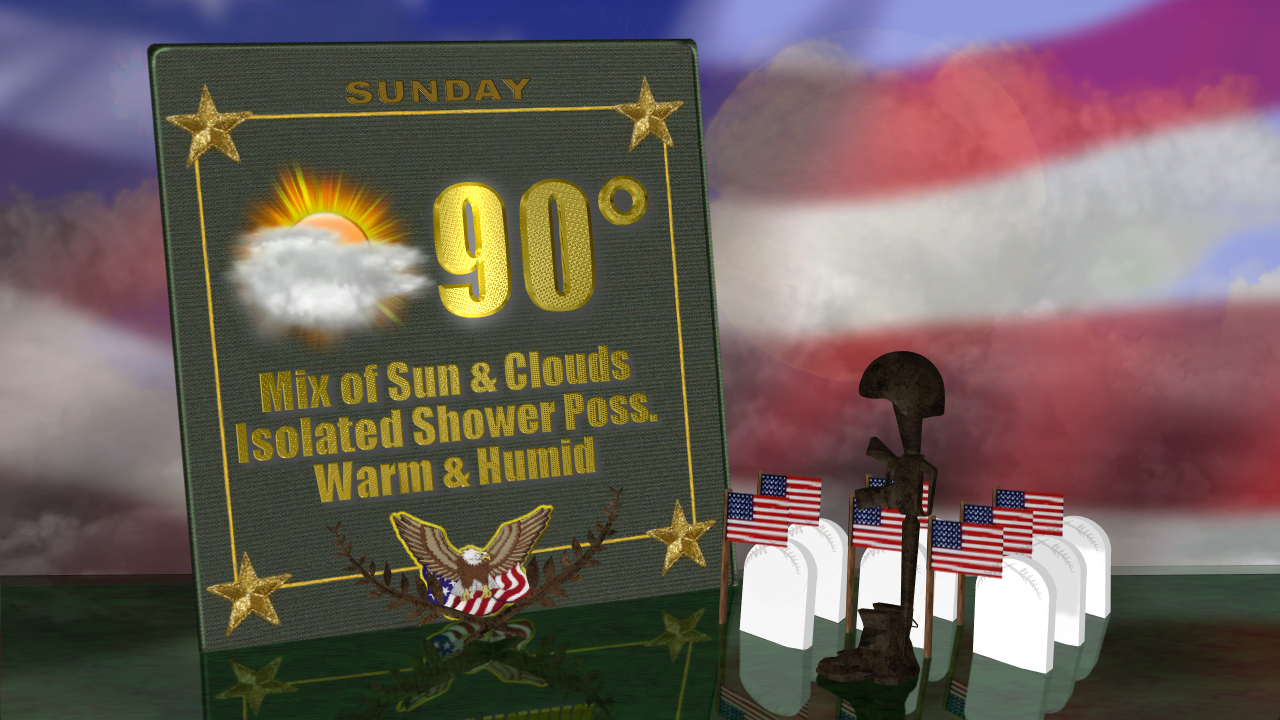 Memorial Day looks to be another nice day locally for any pool parties or events to honor our fallen soldiers with partly cloudy skies and maybe a couple pop-up showers during the afternoon but rain chances are only about 30% for both Sunday and Monday.

Now we will notice our winds becoming a little breezy Monday as Alberto gets closer to making landfall off to the east as winds will be between 10-20 mph out of the NNE during the afternoon.

Heading back to work Tuesday and for much of next week temperatures will gradually be on the rise climbing into the mid 90s under mostly sunny skies with just a stray shower possible each afternoon.

Looking ahead to next weekend it is going to be really hot with highs in the upper 90s with plenty of sunshine.

Here is the latest on Subtropical Storm Alberto as of the 4PM on Saturday.

Alberto is still a very board low pressure system with the main area of circulation with the storm jumping around but is now centered just to the north of the western tip of Cuba.

Alberto is holding steady with max winds of 40 mph and is moving to the north at 13 mph. 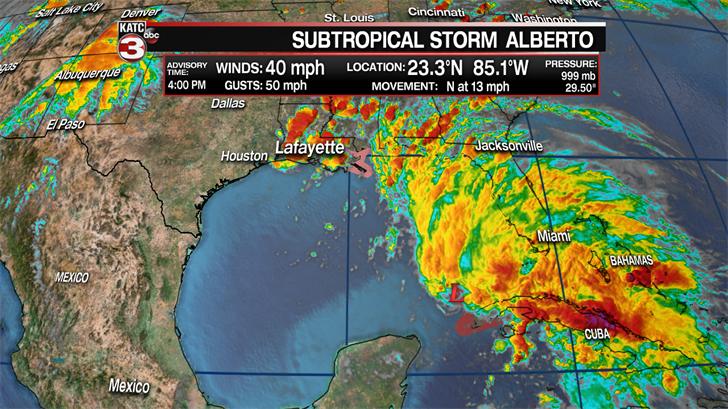 In the next 24 hours Alberto is expected to strengthen as it continues to travel north over warmers waters in the Gulf and combines with an upper level low. 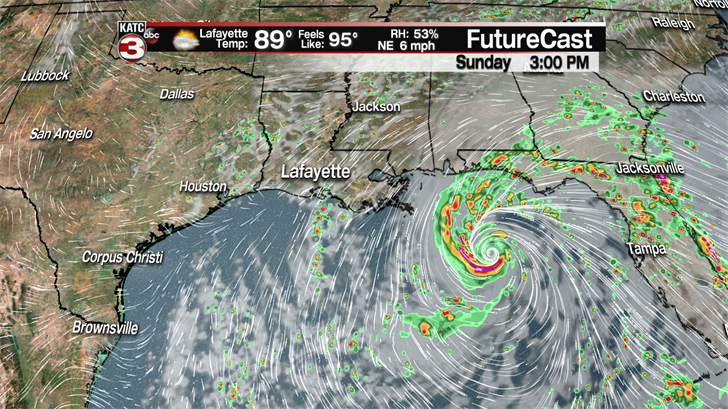 Once Alberto merges with the upper level low and really starts to strengthen it will become more tropical in nature and lose its sub title becoming just Tropical Storm Alberto.

According to the latest track by the National Hurricane Center Alberto will move to the north just off the west coast of Florida on Sunday towards the coast of Alabama where it will then stall out a little or really slow down its forward motion. 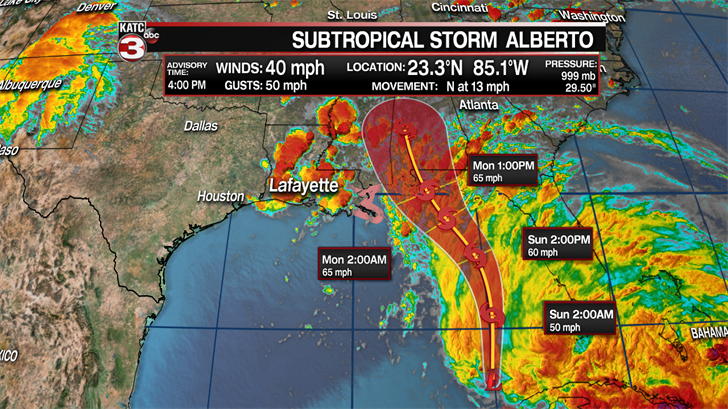 Tropical Storm warnings have now been issued from Mobile all the way down to the tip of Florida while Tropical Storm watches have been discontinued for Louisiana but continue for the Mississippi Gulf Coast. 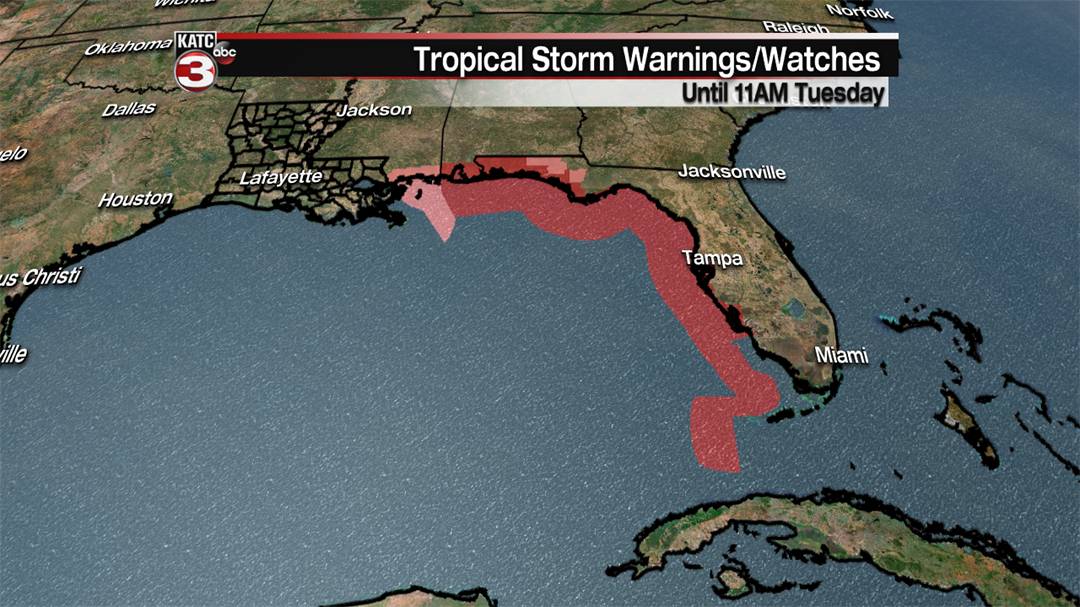 Alberto is now predicted to make landfall near the Alabama-Florida line sometime Monday afternoon/evening as a strong tropical storm with winds of 65 mph. 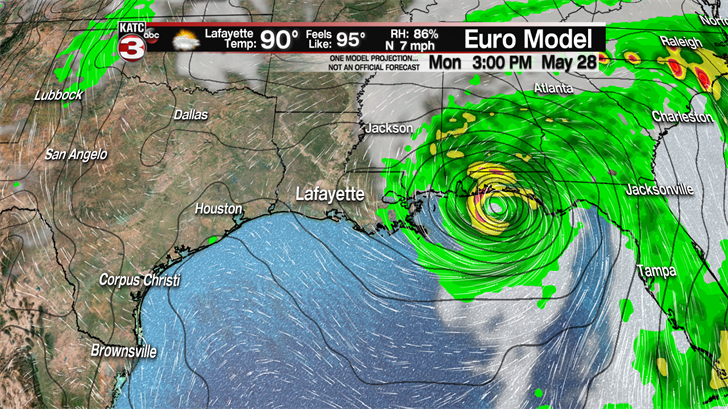 The good news is Alberto is going to be a very small storm with the heaviest rains and winds located only 30-50 miles on either side of the center of the storm.

That said areas along the Alabama and Florida coast where the storm makes landfall could see a storm surge of 5-8 feet and pick up another 3-7 inches of rainfall leading to some flooding concerns. 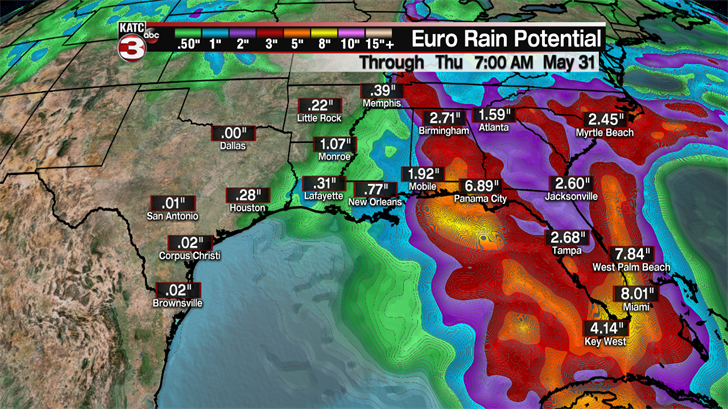 But here in Acadiana we will not see any real impacts from Alberto outside maybe a few isolated wrap around showers/storms on Monday and Tuesday.