Acadiana’s recent summer pattern of partly cloudy, hot and humid days with scattered afternoon storms will continue into the early weekend, but moisture will steadily increase across the region ahead of a tropical disturbance that will be moving northward through the Gulf of Mexico.

In the near term, expect a 30-40% chance of scattered afternoon storms across the area Thursday and 40-50% Friday, then 50-60% for Saturday as moisture and instability levels gradually increase into the weekend.

Meanwhile, an area of disturbed weather accompanied by very weak surface low pressure over the Yucatan Peninsula near Belize Wednesday afternoon is expected to gradually move northward over the next few days.

The National Hurricane Center gives Disturbance 90L a 60% chance of development Friday into the weekend, with odds of a sub-tropical or tropical depression most likely.

At this point, there is roughly a 30% chance the system could become a weak tropical or sub-tropical storm, with winds greater than 39 mph, but it will be highly dependent on when the low comes off of the the Yucatan and what organization it may have at that time, and how long it’s in the Gulf of Mexico.

Unfortunately the tropical model tracks won’t be very useful until a low is established in the Gulf, and then they won’t tell the story of the system’s main impacts…heavy, potentially flooding rains.

The low may not emerge in the Gulf until Friday, perhaps Saturday at it’s latest, then it will have at least a couple of days over the warm Gulf waters, but at the same time, upper level winds should be relatively hostile to the system with drier air on the western side of the disturbance thereby limiting development potential..

Named system or not, there will be copious amounts of deep tropical moisture advancing northward, impacting the Florida Peninsula Friday through the entire weekend, then reaching the northern Gulf States Sunday into Monday.

Heavy flooding rainfall will be the greatest concern with this system, with current Weather Prediction Center (WPC) forecasts for the next week highlighting the greatest threat of flooding rains across a good part of Florida, westward through portions of Alabama, Mississippi, and as far west as Eastern Louisiana.

Rainfall totals of 5-7" over a period of several days will be likely with isolated areas within those WPC contours likely double or more in spots, as rarely do these type of systems not produce a 15" plus multi-day flooding rainfall, somewhere. 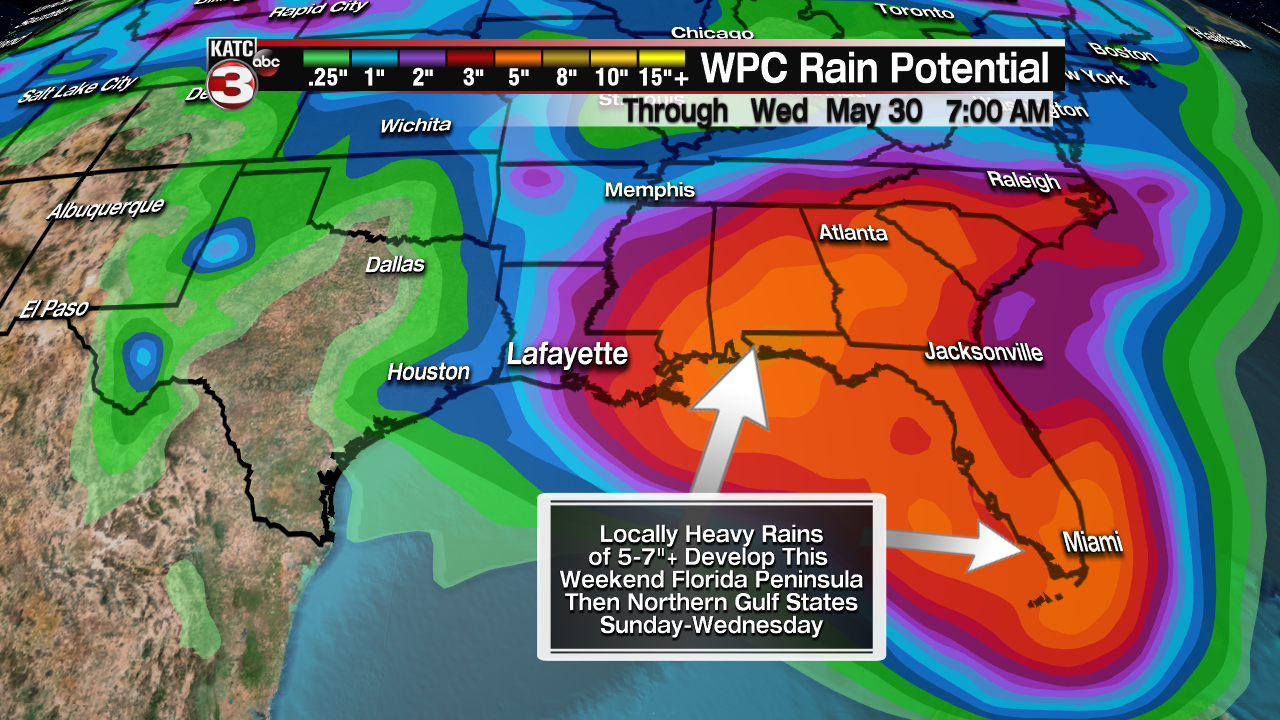 Again, there won’t be much of a feel for what the local impacts will be here in Acadiana, if any at all, until the low emerges off the coast, but several inches of rain will be possible locally primarily from Sunday through Tuesday.

The most troubling aspect with this potential system remains in the forecast today…that the system will become slow and meandering as it nears/makes landfall along the Northern Gulf Coast later this weekend/early next week. Slow and meandering tropical systems or even weak disturbances, almost always produce flooding rains at some point.

If the system remains lop-sided, the greatest threat of flooding rains will be east of Acadiana, but one look at the European Model shows that we aren’t out of the woods regarding more direct impacts with a low pressure system meandering off or along the Louisiana Coast perhaps for several days early next week.

For now, KATC’s 10 Day Forecast is in close concert with the European Model guidance, which we has essentially changed twice a day over the last few days. Stay tuned.

Acadiana residents of the area are urged to keep up with the daily forecasts throughout the holiday weekend, as major changes could occur (positive or negative) before the weekend is done.