While Acadiana will experience a more typical summer pattern with scattered afternoon showers and storms over the next couple of days, a tropical disturbance in the Western Caribbean is expected to move northward into the Gulf by the end of the week. 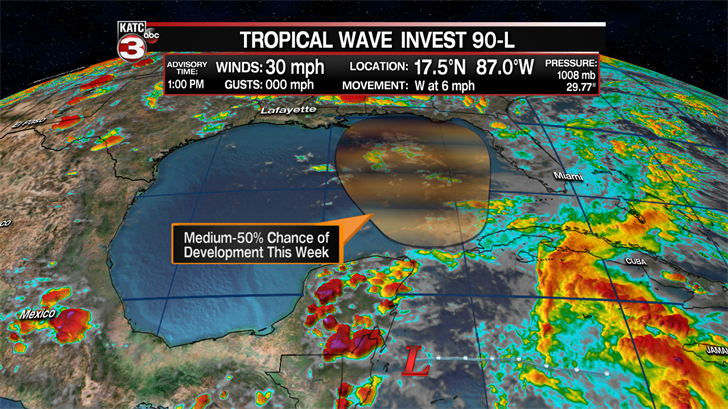 In the near term, the combination of a little more atmospheric moisture content and instability should allow for better coverage of afternoon storms with rain chances pushing the 40-50% range Wednesday, and maybe slightly higher Thursday.

Before the afternoon storms, look for partly sunny, hot and humid conditions through the late morning hours with temperatures reaching the upper 80s to lower 90s before the showers and storms become the more dominant feature in the afternoon.

As the for the disturbance heading for the Gulf of Mexico, the National Hurricane Center is giving an area of weak surface low pressure in the Western Caribbean a medium, or 50% chance of development later this week as it migrates into the Central to Eastern Gulf later this week.

Upper level conditions will not be favorable for significant development, but the system could become a depression and/or a weak tropical storm or hybrid, sup-tropical storm prior to a possible landfall this weekend.

Nonetheless, this system will ultimately be a heavy rain/flood maker for portions of the Gulf Coast States beginning later this week for the Florida Peninsula, and then more than likely, the rest of the Florida Panhandle, Alabama, Mississippi and into Eastern Louisiana this weekend. Thereafter, the forecast is quite murky.

For now, the Weather Prediction Center (WPC) 7 day rainfall forecast product is pretty much in line with the latest European Model trend through day 5 with areas of 3-7" or more rainfalls likely across portions of South Florida and then the Gulf Coast.

In the days ahead, we will be watching for the heavy rain areas expanding westward. 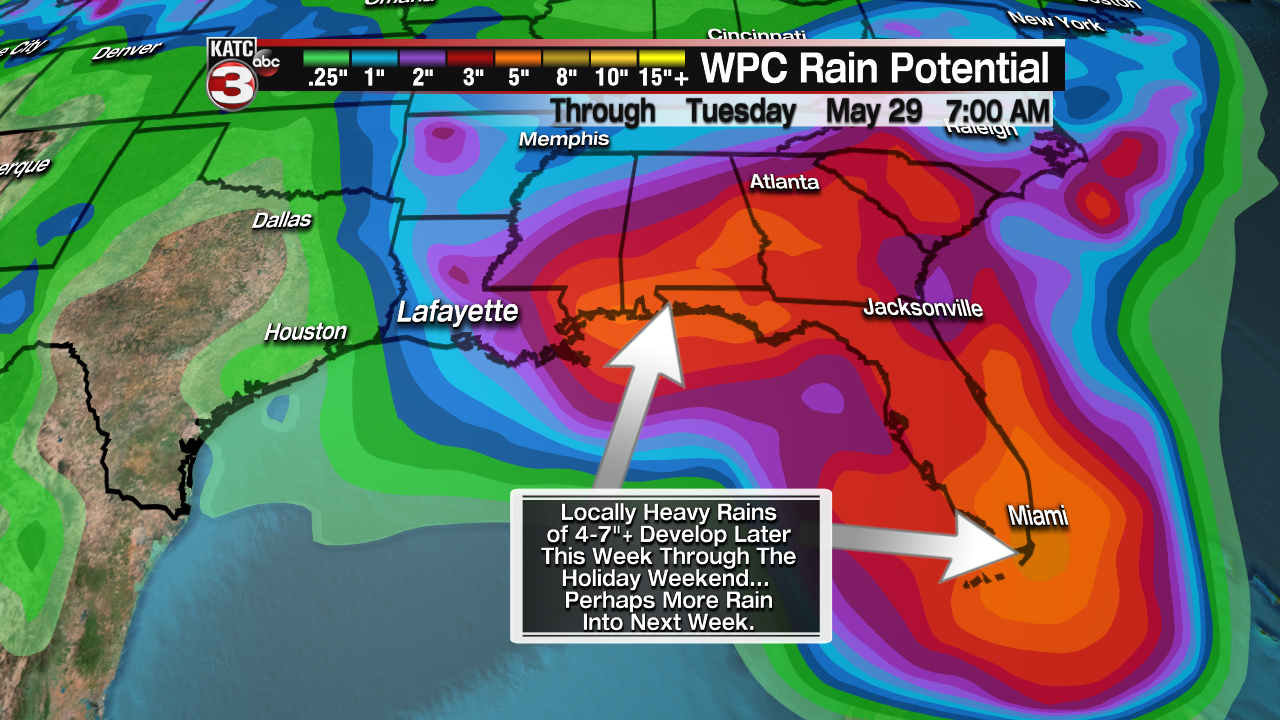 While the GFS Model continues to show model contamination with convective feedback, the European Model is the best what we have moving forward, and that model while showing weak development with the disturbance prior to landfall.

More importantly for Acadiana the European Model shows the weak low drifting westward toward the Acadiana area later in the holiday weekend into next week..

Per the Euro, the system may stall or drift for a day or two inland, and then that’s when we could see some rainfall issues, before the system moves out of the region toward the mid-latter part of next week.

So while it remains impossible to gauge rainfall potential locally for the area, there could be a few days with the threat of flooding rains for the Acadiana area beginning as early as Sunday and perhaps continuing through next Wednesday of next week, and that is reflected in Acadiana’s 10 Day Forecast for now…stay tuned.