Alleged Abuse:  Accused of sexual abuse in the 1980’s in Iberia and St. Landry parishes; a suit filed against him was dismissed because the parents waited too long to file.  His name appears on a list of settlements the insurance company paid out to victims on behalf of the Lafayette diocese; the time frame would have placed him in Eunice at the time. No criminal charges were filed.

Where is he now:  Unknown

Limoges is accused of molesting two boys in the early 1980s who were 6 and 7 years old while he was pastor at Our Lady of Victory Church in Loreauville, according to a lawsuit filed against him a decade later. It was eventually dismissed, as courts found that too many years had elapsed between the abuse and filing of the suit.
In a 1983 preliminary psychological evaluation at the House of Affirmation, where doctors work with priests who have exhibited pedophilia tendencies or problems like alcoholism, a doctor wrote that Limoges himself had been raped when he was young.

Court records show the lengths to which the Lafayette Diocese went to protect Limoges even as the Gauthe case was beginning to make waves in Vermilion Parish.

In December 1983, Limoges was on the verge of being sent home from the California-based House of Affirmation. But Lafayette Diocese Vicar General Monsignor Henri Alexandre Larroque wrote a letter marked confidential that asked the facility to keep him a while longer.

Larroque said the diocese had informed the 15th Judicial District Attorney’s Office about the allegations against Limoges and that returning to Lafayette after the other priest — Gauthe — had been accused would be unwise. 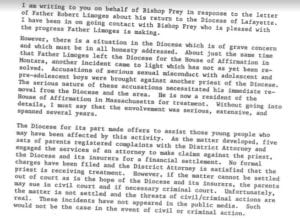 “My reason for writing is that the possibility of Father Limoges returning to the Diocese at this time must be seriously questioned, especially in view of the fact that he may be harmed in the undertow of a case which does not envolve (sic) him at all,” Larroque wrote.

The diocese contacted Diocese of Baton Rouge Bishop Stanley Joseph Ott, who accepted Limoges as a priest there. It didn’t last. 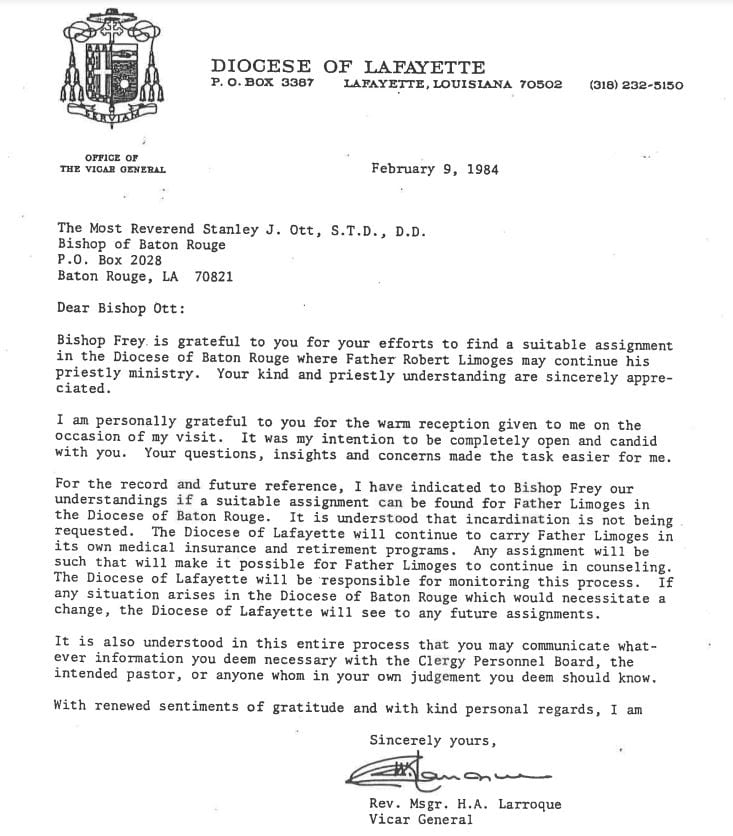 According to church documents filed in the insurance suit, Limoges was described as follows: “Involved in pedophilia, but not on Simon’s list. Treatment at House of Affirmation in California. Molested children in Lafayette, Police know of his activities but families have not filed charges. Suspended in 1984 and now at St. Bernard Abbey in Alabama.”

Limoges’ name appears on a list from the lawsuit involving the diocese and their insurance company.  One victim’s name is listed under Limoges with the amount of $47,863.  The dates of the alleged abuse would have been when Limoges was in Eunice.

June 1, 1979: Ordination at Our Lady of Fatima in Lafayette

May 1,1982 : Administrator Our Lady of Victory Loreauville, La.

January 25, 1983 : “Report of sexual fondling of adolescent in Eunice to Pastor and local police…  therapy offered – no further action. District Attorney – No charges based on proposed treatment of Limoges”  written in documents from the church filed in court.

February, 1984 : Returns from House of Affirmation

May 3, 1984 : Termination of appointment in because of clashes with pastor

May 7, 1984 : Leave of absence from ministry to return to Canada

July 1984:  Limoges suspended and removed from the diocese, according to the diocese. Entered St. Bernard Abbey in Alabama.