Alleged Abuse:  Accused of sexual abuse, sent for treatment after reportedly confessing.  At least one lawsuit settled by the church.

Harry Quick, who died in 1994, was described as “a child molester” by Bishop Frey during a deposition.

According to documents in federal court filings, a lawyer’s letter to Monsignor Henry Alexandre Larroque indicated Father Quick admitted to molestation to Bishop Frey in late 1976 or early 1977.  In a memo, it is said that Quick apologized to the family, describing it as one single encounter.

Frey testified that he received a complaint in 1976 or 1977 involving Quick and sexual abuse of  an underage boy.  He says Quick admitted to it. Frey says as a result, Quick was taken out of parish work, sent for counseling at Notre Dame, and assigned to a hospital as the Chaplain.

In a 1995 deposition Monsignor Henry Alexandre Larroque is asked about a lawyer’s conversation with Frey in which Frey stated that Quick “had always been a problem and that every time he moved it was because there was some complaint of molestation.” 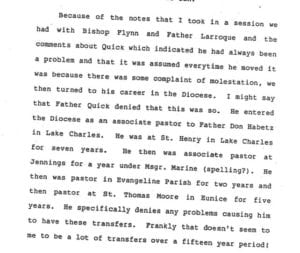 At the time of the deposition, Larroque indicated Quick had retired, but was never suspended.   There is a spreadsheet of insurance payouts by the diocese that indicates one victim was paid a settlement because of accusations against former priest Lane Fontenot and Quick.  The notation says the settlement against Quick was for the “three weeks when Fontenot gave him (the victim) to Quick”.