Alleged Abuse:  Five victims came forward in 1993 to allege abuse that happened from 1955 to 1965 in Evangeline and Vermilion Parishes.  Two lawsuits were dismissed because the women waited too long to sue; one lawsuit was settled.  No criminal charges were filed.

Aldeo Gilbert, who died in 2007, was accused by several women in the 1990s of leading a cult of women who preyed on young girls in the 1950s and 60s, ostensibly to guide them into being nuns. Several women, some of whom filed lawsuits against him, accused Gilbert of using his “vocation clubs” to sexually, emotionally and physically abuse them, according to lawsuits our investigative team uncovered. The women alleged that the clubs operated at Sacred Heart in Ville Platte from 1952 to 1959 and at St. Theresa Catholic Church in Abbeville from 1959 until 1969.

The lawsuits were dismissed; the court found they were filed too late. The women who sued claimed to have remembered the abuse during psychiatric counseling many years after it allegedly had occurred.

One lawsuit included a sworn statement from a man who served as a Catholic priest from 1961 until he resigned in 1971. The priest, who became a businessman after leaving the church, said in a 1994 sworn statement that he arranged a meeting between two girls and Bishop Maurice Schexnayder. The meeting, which included the girls’ parents, took place in 1964 or 1965.   The girls told Schexnayder “about extensive sexual abuse committed by Aldeo Gilbert upon females in Gilbert’s vocation clubs,” the document states. The priest told Schexnayder that he believed the girls. One year later, the parents of the two girls asked the priest if Schexnayder had made any changes or had sanctioned Gilbert in any way. The priest told the parents that he didn’t think the bishop had done anything. 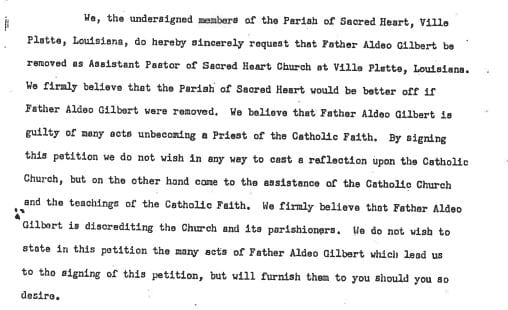 Also in court documents, a letter signed by members of the Parish of Sacred Heart in Ville Platte requested Gilbert be removed saying “we believe Father Aldeo Gilbert is guilty of many acts unbecoming a priest of the Catholic Faith.”

July 16, 1968 : Deprived of the faculties of the Diocese of Lafayette by Bishop Maurice Schexnayder, for actions unbecoming to a priest