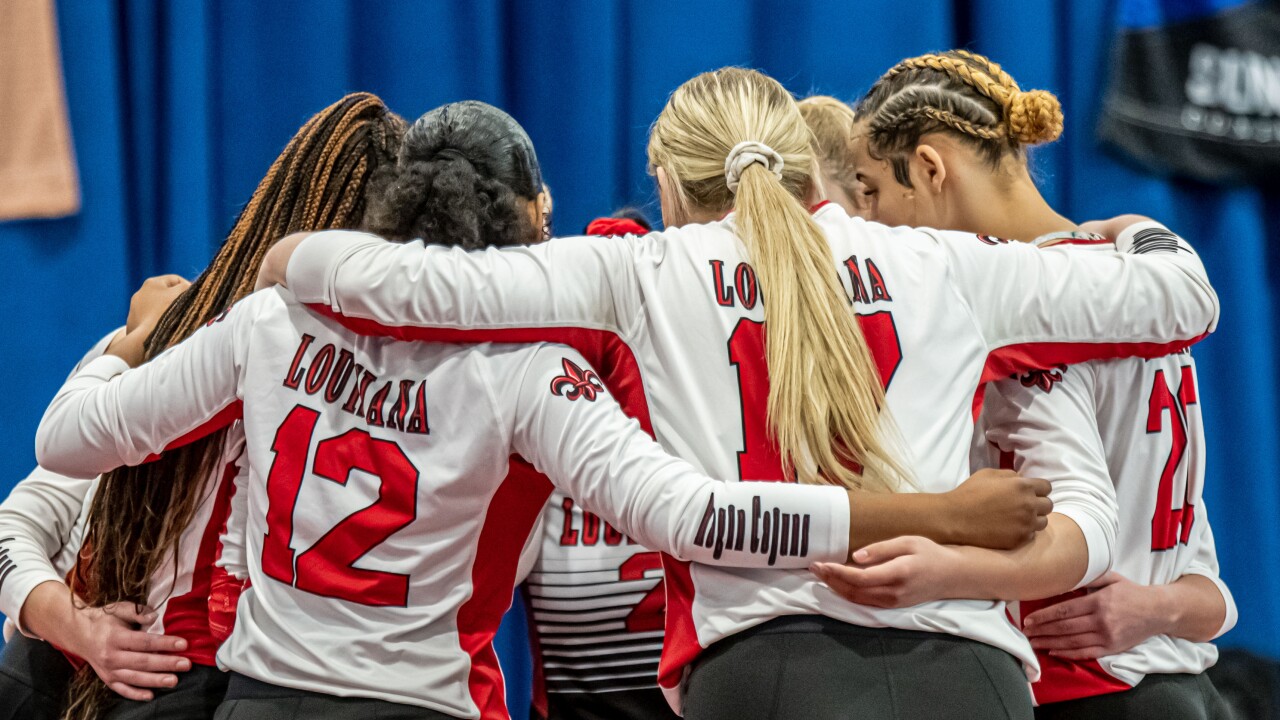 A pair of close calls in the final two sets was the only thing that separated the Louisiana Ragin’ Cajuns Volleyball team from overcoming the obstacle of being shorthanded for its Sun Belt Conference Tournament appearance as Little Rock snuck out of the Foley Events Center with a 3-1 (25-18, 19-25, 25-22, 25-20) victory in the first match of the Pool D pod.

Louisiana (17-6) narrowly missed out on swinging the momentum in its favor after closing the gap to 21-20 in the third set and again at 20-18 in the fourth set. Each time, though, the Trojans (5-13) picked up timely sideouts to capture those frames and ultimately the match.

The Ragin’ Cajuns played the match without the services of key starters Avery Breaux and Kara Barnes, plus several reserves, due to COVID-19 related protocols.

After falling in the opening set, Louisiana turned to Hali Wisnoskie in the second set as she found the floor seven times off of 15 error-free swings in the victory. The senior came through in key spots early with a pair of kills after the Trojans sliced the lead to 8-6, then scored twice in the final three rallies to finish off the frame.

With the match lead hanging in the balance the two teams played through five ties in the third set until a 9-4 run by the Trojans opened a 16-11 advantage. The Ragin’ Cajuns began the comeback trail and were on the verge of a tie again after a Wisnoskie kill made it 22-21. However, a service error and a subsequent ace led to a favorable result for the Trojans.

Kills from Kelsey Bennett and Cami Hicks were followed by a block from Hicks and Abby Lynn that corralled Little Rock and made it 10-8 in the third set. From there the race was on, as the Ragin’ Cajuns stayed within four points or less until it was 20-18. The Trojans won a critical point on the next rally getting a block, then back-to-back Laura Jansen kills created ample breathing room.

With one more pool play contest remaining (vs. Georgia State), Louisiana still has its eye on a spot in the knockout round bracket of the SBC Tournament which starts on Saturday. The Ragin’ Cajuns will know what it will take to get there following the results of Thursday’s Pool D contest featuring Little Rock and Georgia State.

LEADING THE RAGIN’ CAJUNS
Wisnoskie landed her fourth 20-plus kills effort of the season, finishing with a match-high 23 kills on a .254 hitting percentage. It was her fifth consecutive match in double digits, and the 73rd overall of her career.

Bennett scored 15 kills while hitting .217 and rounded up 10 digs for a fourth straight match with a double-double. Bennett now leads the Ragin’ Cajuns with 12 double-doubles.

Hicks generated five kills and teamed with Bennett to lead the frontline defense. Bennett led the way with four blocks, while Hicks had a hand in three blocks.

Libero Hannah Ramirez collected 21 digs as she extended her streak of consecutive matches in double figures to 35 straight dating back to last Oct. 11. For Ramirez, it also marked the fourth straight match reaching or surpassing 20 digs and the 19th time overall as a Ragin’ Cajun.

Playing in only her third match of the season – first outing since Sept. 12 vs. South Alabama – Lynn handed out 41 assists (10.3 per set) and rounded up nine digs.

UP NEXT
The Ragin' Cajuns return to action in the pool play segment of the 2020 Sun Belt Conference Volleyball Tournament on Friday, Nov. 20 facing Georgia State in the final match of the Pool D group.