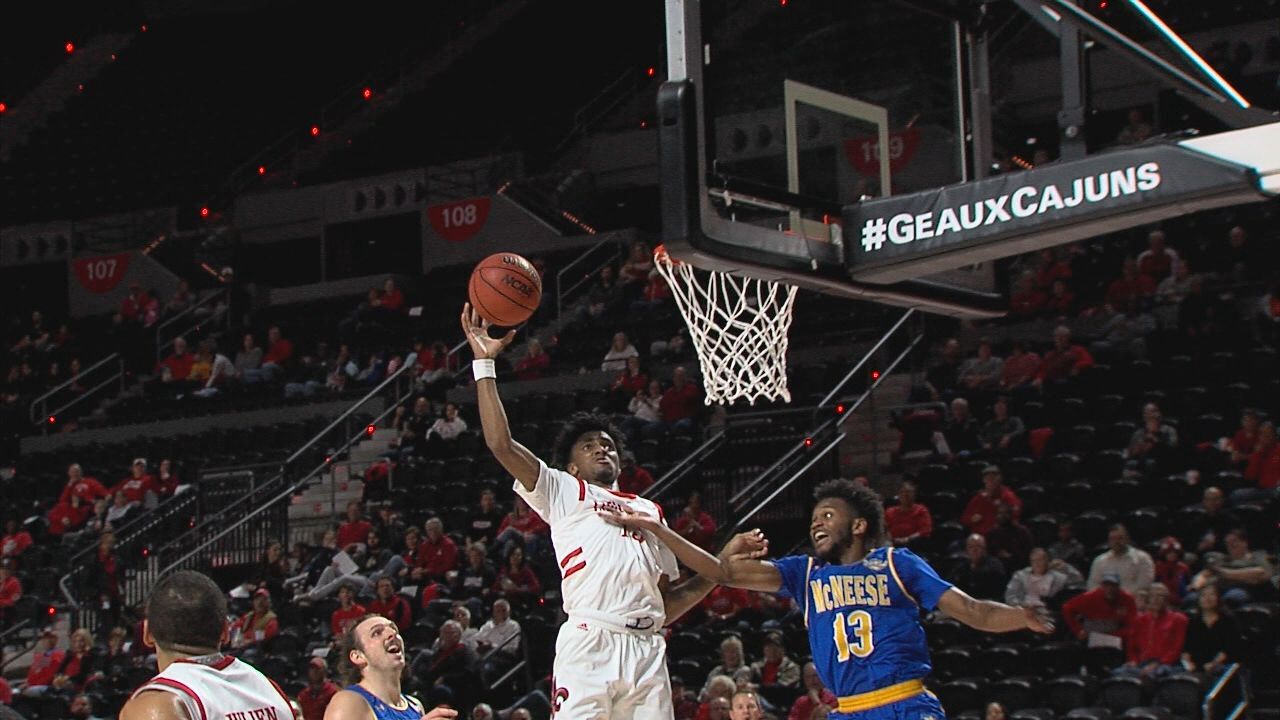 LAFAYETTE – Cedric Russell scored 18 of his game-high 22 points in the second half and the Louisiana Ragin’ Cajuns Men’s Basketball team used a 20-2 run over a nearly six-minute span to defeat McNeese, 85-80, before an announced crowd of 4,233 on Saturday at the Cajundome.

Jalen Johnson scored 21 points and blocked a career-high five shots as Louisiana (2-0) turned a 31-21 deficit with 2:12 remaining in the first half into a 41-33 advantage on Kobe Julien’s dunk with 16:25 remaining in the game.

Louisiana trailed 29-16 after a pair of free throws by A.J. Lawson with 4:35 remaining in the first half before closing the half on a 16-4 run.

Julien, who scored 15 points and grabbed seven rebounds before fouling out with :13 seconds remaining, drained a 3-pointer for Louisiana before freshman Calvin Temple, Kristian Lafayette and Johnson eventually buried 3-pointers that would close the gap to 33-32 at halftime.

Louisiana took its first lead of the night when Russell, who finished 8-for-17 from the floor and 5-for-11 from behind the 3-point line, scored on a layup at the 19:00 mark before Dou Gueye, Russell and Julien each added buckets to push the lead to 41-33.

After a bucket by Roydell Brown cut the McNeese deficit to 45-41 with 14:14 remaining, Russell drained three consecutive 3-pointers as part of an 11-1 run for Louisiana over a 2:22-span to give the Ragin’ Cajuns their largest lead of the night, 56-42.

Louisiana led 77-67 after a Gueye bucket with 1:29 remaining before McNeese went on a 12-3 run, capped by Leondre Washington’s three-point play with :29 seconds left that cut the lead to 80-79.

Gueye added 11 points and grabbed six rebounds for the Ragin’ Cajuns, who outscored McNeese, 53-47, in the second half to win its fifth straight game in the series and improve to 60-35 all-time against its I-10 rival.

Dru Kuxhausen scored 18 points to lead McNeese with Lawson adding 14. Brown, who played at Louisiana as a freshman in 2016-17, recorded a double-double for the Cowboys with 11 points and 10 rebounds with Washington adding 11 points off the bench.

Louisiana will return to action on Tuesday (Nov. 12) when it hits the road for the first time during the 2019-20 season, facing Big 12 opponent TCU in a game that will be televised on FOX Sports Southwest. Tipoff is scheduled for 7 p.m.