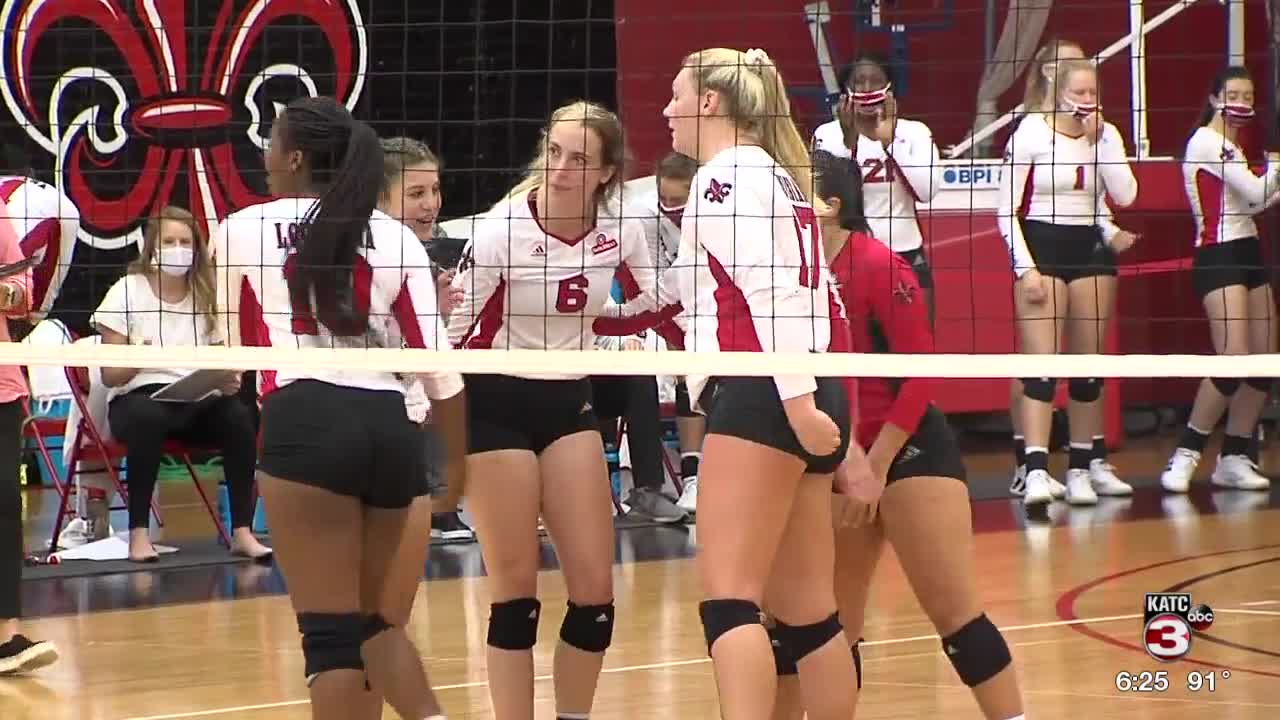 LAFAYETTE – Charged by a collective effort both offensively and defensively the Louisiana Ragin’ Cajuns Volleyball team bounced back to capture a 3-1 (20-25, 25-13, 25-19, 25-20) win over Houston Baptist on Saturday at Earl K. Long Gym.

With three players reaching double digits in kills – five total amassing at least seven kills – and five with double digits in digs the Ragin’ Cajuns (2-0) completed a perfect opening weekend of the 2020 season.

Coming off a sweep of HBU (0-2) on Friday, Louisiana faced adversity early on as the visitors controlled the momentum throughout the opening set resulting in a 25-20 win for the Huskies.

Similar to Friday night, though, the Ragin’ Cajuns dialed up the intensity on offense, recording at least 14 kills in each of the final three sets to overwhelm the Huskies. Defense factored into the turnaround for Louisiana as well, as HBU was limited to only six kills in the next two sets following its opening win.

Kelsey Bennett broke a 6-all tie in the second set with a kill, then Kara Barnes served up four straight points for an 11-6 edge and Louisiana was on its way to flipping the script with the second set win. Barnes later provided the spark in the match-changing third set, tallying six kills in the frame including two key ones during a 4-0 run that increased the advantage to 19-13.

The rally was completed in the fourth stanza when a 7-1 run, which was capped off by an overpass kill from Tia Jade Smith which kept the Ragin’ Cajuns ahead, erased a 10-6 deficit. After HBU forged a 15-all tie, Avery Breaux executed a timely dump kill that began a 4-0 run and sealed the triumph.

Hali Wisnoskie claimed match-high honors once again scoring 14 kills – reaching double digits for the second time in as many matches this young season. She increased her career kills total to 1,054 which leaves her two shy of surpassing Stacey Reilly’s rally scoring era record.

Barnes set a career-high in kills once again, netting 13 off of only 24 swings. The sophomore from Rowlett, Texas scored six off of nine swings in the critical third set win.

Libero Hannah Ramirez scooped a match-high tying 19 digs in leading the Ragin’ Cajuns group that tallied double digits. With 18 digs and 17 digs, respectively, Wisnoskie and Breaux recorded the first double-doubles of the season.

The Ragin’ Cajuns and Jaguars are scheduled to meet at 6:30 p.m. on Friday followed by a Noon matchup on Saturday.