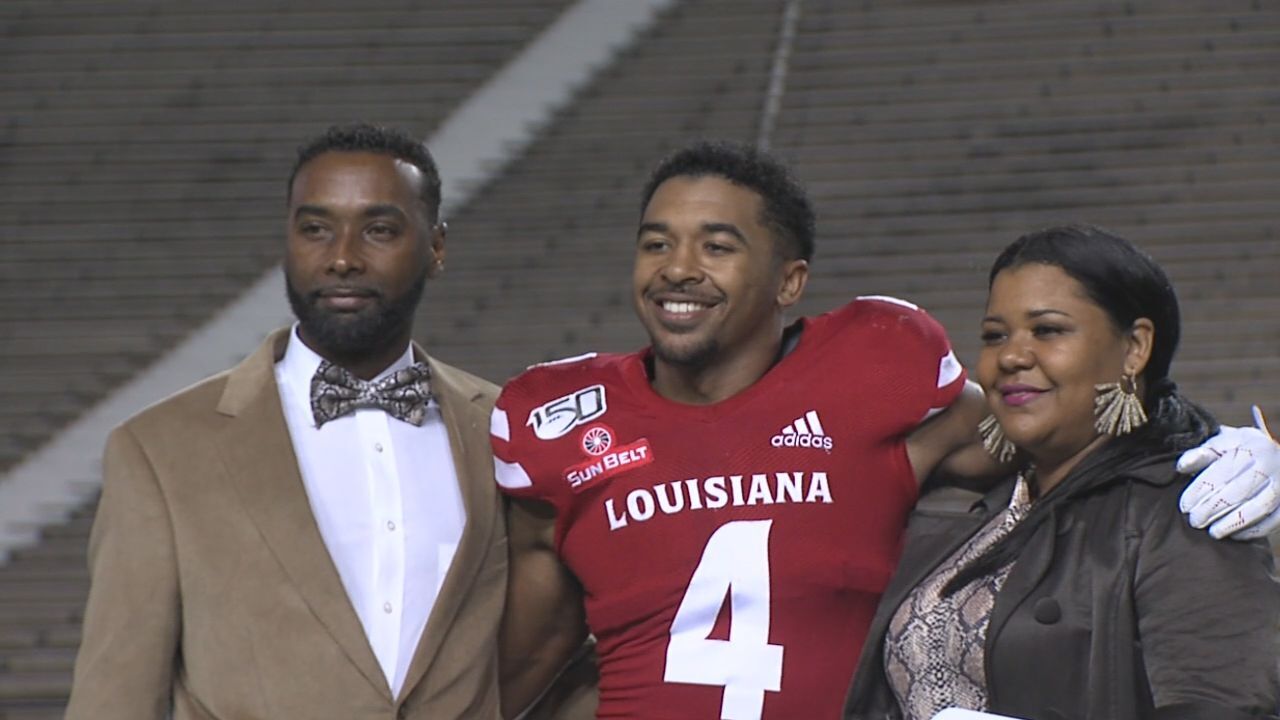 LAFAYETTE – For the second-straight season, a missed ULM field goal in the final seconds of the game proved to be the difference as Louisiana held off the Warhawks for a 31-30 victory at Cajun Field on Saturday night.

Louisiana (10-2, 7-1 SBC) eclipsed the double-digit win mark for the first time ever with its 10th victory of the season, while also setting the school record for the most Sun Belt wins with seven.

The Ragin’ Cajuns put together a balanced attack throughout the game, throwing for 270 yards and rushing for 252. Quarterback Levi Lewis accounted for all of the team’s passing yards and finished the night 15-for-23 with three touchdowns, tying a career high.

Raymond Calais and Elijah Mitchell each went over 100 yards against the Warhawks, going for 107 yards and 102 yards, respectively. Calais added his sixth rushing touchdown of the season after an 83-yard scamper in the second quarter, becoming just the second player in program history with three rushes of 80 yards or more in the process.

On defense, senior linebacker Jacques Boudreaux notched his fifth double-digit tackle game of the season with 12, the first player to accomplish the feat since Justin Anderson in 2013. Lorenzo McCaskill joined Boudreaux in double digits, finishing his night with a career-high 10 stops.

Bralen Trahan was responsible for the games only turnover, bringing in his second interception of the year on the first drive of the game. He finished the night with five tackles.

Trahan provided some early-game heroics on ULM’s opening drive, picking off Caleb Evans on fourth down and setting up his offense on the Warhawk 40. Facing a fourth down, Lewis remained poised and found Bell across the middle to put Louisiana ahead 7-0 early in the game.

ULM responded with 3:03 to play in the first quarter when Caleb Evans rushed in from six-yards out, knotting the game up at seven points apiece.

Lewis once again put Louisiana ahead through the air, capping off a seven-play, 99-yard rush with a 42-yard touchdown pass to Bradley, who coasted into the end zone to put the home team up, 14-7.

After the Warhawks responded with a 47-yard touchdown pass, Calais gave Louisiana a 21-14 lead with 28 seconds before halftime after he exploded through the line and out-ran three defenders for an 83-yard score.

ULM capitalized on good field position following a turnover on downs by Louisiana when Evans hit Jonathan Hodoh for the 40-yard score to knot things up at 21 points apiece.

Louisiana pulled back ahead on the ensuing possession and once again converted on a fourth-down play when Lewis found LeBlanc in the back of the end zone, propelling the Ragin’ Cajuns back into the lead, 28-24.

Following a 23-yard field goal by ULM with five seconds on the clock in the third quarter, the Warhawks took its first lead of the night at 30-28 when Austin Vaughn scored from 11-yards out.

ULM then put itself in great position at the end of the game, driving the ball 57 yards in 10 plays to set up a 35-yard field goal to win the game. After two Louisiana timeouts to ice the kicker, the ball was finally snapped and the kick sailed wide left to wrap up the historic 31-30 win.

For the second-straight season, Louisiana will travel to Boone, N.C., to face Appalachian State in the 2019 Sun Belt Championship Game. Kickoff from Kidd Brewer Stadium is slated for 11 a.m. and will be nationally televised on ESPN.