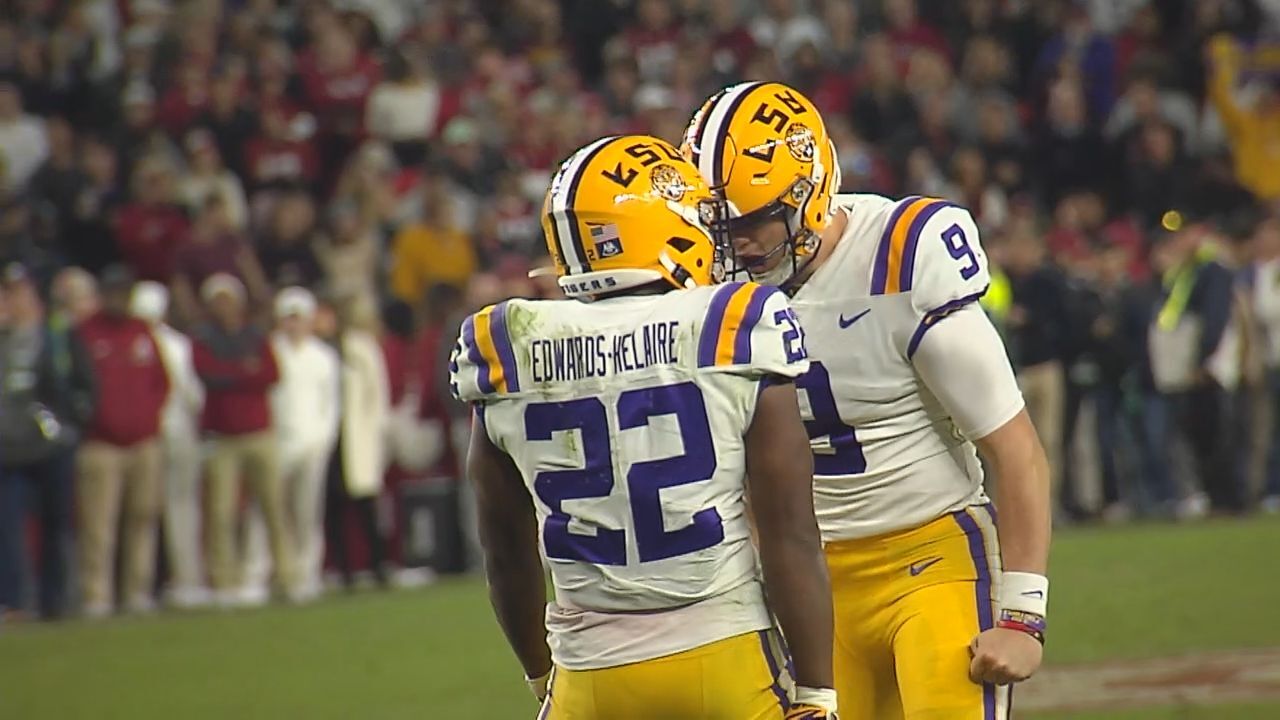 BATON ROUGE – LSU quarterback Joe Burrow and running back Clyde Edwards-Helaire have been selected as Southeastern Conference Offensive Players of the Week for their performance in the 46-41 win over third-ranked Alabama on Saturday, the league office announced on Monday.

The honor is the fifth of the year for Burrow, and seventh of his career with the Tigers, while Edwards-Helaire was honored for the first time.

It’s also just the third time players from the same team have shared SEC Offensive Player of the Week honors since the league established the weekly player of the week honors in 1985. The last time it happened came in 1991 when Tennessee quarterback Andy Kelly and wide receiver Carl Pickens shared the honor. The only other time it’s happened came in 1986 when LSU’s Tommy Hodson and Wendell Davis shared the award for their performance in the win over Notre Dame.

Burrow, who is now 19-3 as LSU’s starting quarterback, completed 31-of-39 passes for 393 yards and three touchdowns in the win. The victory was LSU’s fourth over a Top 10 opponent this year and it marked the eighth time in two years that Burrow has led the Tigers to a win over a team ranked in the Top 10, which is the most for any quarterback in school history.

Burrow added 64 rushing yards to finish with 457 yards of total offense, the third-highest total in school history. His 31 completions tied a career-best and ranks No. 3 in school history. He also extended his school-record for passing TDs in a season to 33 and became the fourth player in LSU history to pass for 3,000 yards in a season.

Edwards-Helaire rushed for 103 yards and three touchdowns and caught nine passes for 77 yards and a score in the victory. He finished with 199 all-purpose yards and he’s now rushed for 100 or more yards in four of LSU’s five league games.

His 13-yard TD reception with six seconds left in the first half gave the Tigers a 33-13 lead at halftime. Edwards-Helaire added TD runs of 1 and 5 yards in the fourth quarter with the later pushing the LSU lead to 46-34 with 1:37 left to play.

Edwards-Helaire averaged 5.2 yards per carry as he became the first player to score four TDs in a game against Alabama since 2007. He accounted for a combined 14 first downs/TDs in the contest and he touched the ball nine times (out of 23 LSU offensive plays) in the fourth quarter.

LSU’s 46 points were the most by the Tigers in the 84-game series with Alabama and it’s also most scored against the Crimson Tide in regulation in Bryant-Denny Stadium history.