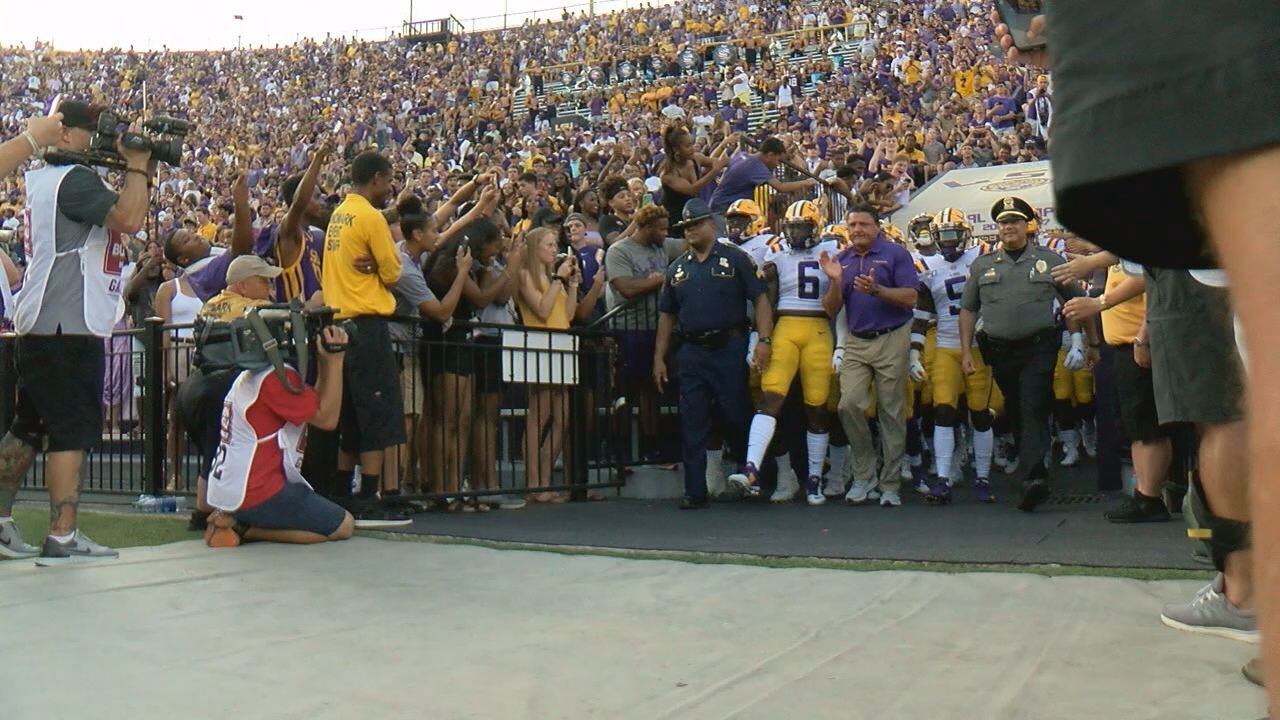 BATON ROUGE — Joe Burrow tied an LSU single-game record with five touchdown passes before halftime and No. 6 Tigers held a multi-touchdown lead for all but the first six minutes in a 55-3 victory over Georgia Southern on Saturday night.

Unleashing a new spread offense, the Tigers (1-0) scored 21 points in the first quarter - something they never did in any quarter last season. Their point total was the most in a non-overtime game since scoring 63 against New Mexico State in 2014.

"I wanted 60 tonight, but we didn't end up getting it. Hopefully we will get it eventually," Burrow said. "We've definitely come out of the stone age."

Directing his unit with pace and precision, Burrow completed 23 of 27 passes for 278 yards without an interception before being subbed out after LSU's first possession of the second half, which ended with a field goal. That drive marked Burrow's last chance to break the LSU mark of five touchdowns in a game set by Zach Mettenberger in 2013.

Records aside, LSU looked different offensively, throwing 39 times and rushing 33, with more rushes coming in the second half as the Tigers ran down the clock.

LSU coach Ed Orgeron has said throughout August that he finally has the offense he wanted. Designed largely by new passing-game coordinator Joe Brady and overseen by incumbent offensive coordinator Steve Ensminger, the up-tempo, no-huddle scheme routinely features five receiving targets, some of whom give Burrow the option to unload the ball quickly if under pressure.

"We're going to run the spread offense. We're going to score points. We've got athletes. That's what we do," Orgeron said. "The scheme is a lot better this year. We have answers to different coverages. ... We put our guys in position to have success."

Burrow often was ready for the snap - and could be seen hopping anxiously - while officials stood over center, forcing the Tigers to wait until the Eagles had a chance to make defensive substitutions.

"I got on the officials a couple of times because we didn't sub, and they were holding the ball up. We are trying to go tempo," Burrow said. "We are going to keep building on this thing and make it even better."

Burrow's first touchdown pass capped a 75-yard drive that took only 2:24 off the clock. LSU led 14-0 with 8:10 remaining in the opening period. The longest of any of the Tigers' six touchdown drives with Burrow under center lasted 3:50.

Burrow competed passes to nine players. By the end, 14 LSU players had caught a pass, led by Justin Jefferson's five catches for 87 yards and a touchdown.

Terrace Marshall Jr. caught three short scoring passes. And the running backs and tight ends were involved. Tight end Thaddeus Moss, the son of Hall-of-Fame receiver Randy Moss, caught two passes for 61 yards, including a 44-yarder deep down the right side. Running back Clyde Edwards-Helaire caught four passes for 31 yards and rushed for a short TD.

Georgia Southern (0-1), which won 10 games last season, was confronted with an LSU defense prepared to stop its triple-option. Eagles starting quarterback Shai Werts completed one pass for no yards and was held to minus-7 yards rushing before being knocked out of the game with an apparent upper body injury in the first half.

LSU finished with a 472-98 advantage in total yards.

LSU's defense forced two turnovers. Rashard Lawrence forced a fumble recovered by Patrick Queen. Grant Delpit recovered a second fumble after outside linebacker K'Lavon Chaisson dislodged the ball with a heavy hit that left running back Matt LaRoche needing attention on the field before walking off with help from trainers.