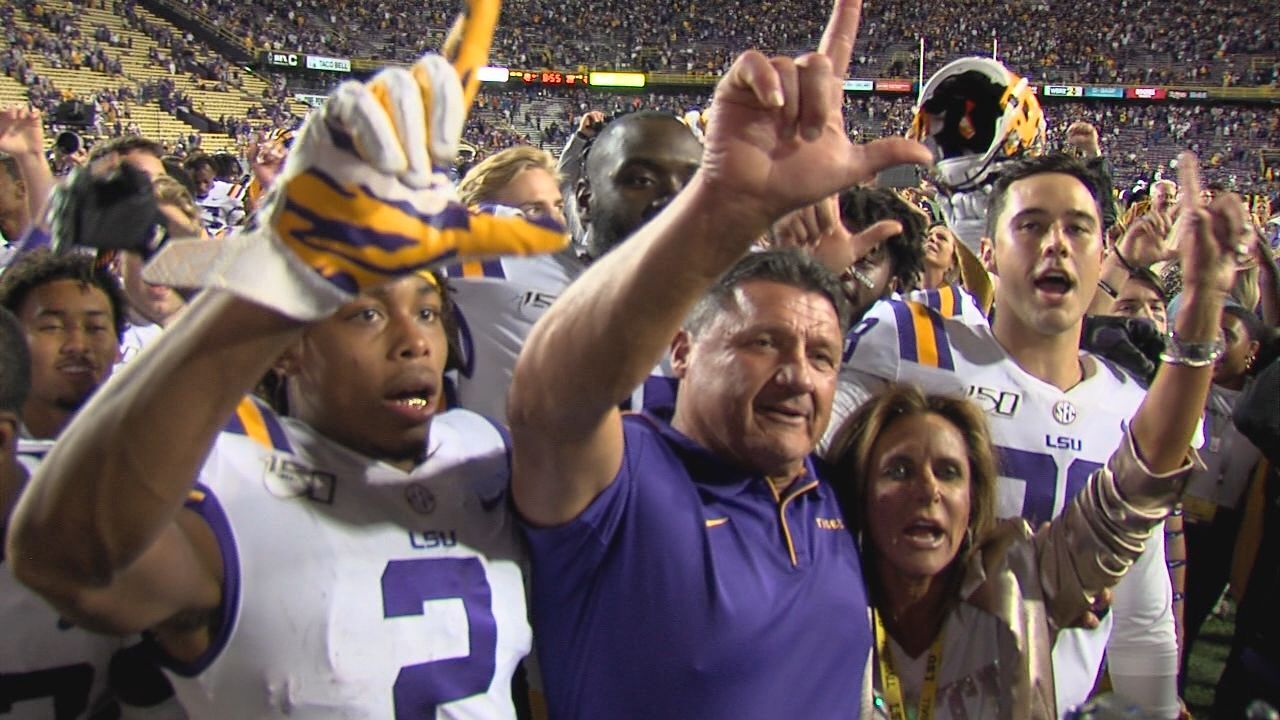 BATON ROUGE, La. (AP) — Joe Burrow passed for 293 yards and three touchdowns, and fifth-ranked LSU scored three straight touchdowns after falling behind early in the second half to emerge with a 42-28 victory over No. 7 Florida on Saturday night.

Facing a Florida defense that came in leading the nation in interceptions and leading the Southeastern Conference in sacks, the Tigers (6-0, 2-0 SEC) totaled 511 yards without giving up a sack or committing a turnover.

“What can we say about our offense?” said a beaming LSU coach Ed Orgeron, declaring that holding Florida’s defense without a sack was “the biggest stat of the night.”

“I don’t think we were able to get pressure on him, and when we did, he did a god job of scrambling,” Florida coach Dan Mullen said.

Ja’Marr Chase had 127 yards receiving and the last of his two touchdowns was a 54-yarder to give LSU a two-score lead with 5:43 left. Justin Jefferson caught 10 passes for 123 yards and a touchdown.

Burrow, meanwhile, went 21 of 24, meaning he had the same number of touchdown tosses and incomplete passes.

“When you have a quarterback like Joe, you just believe when he gets the ball in his hands you’re going to score a touchdown,” Orgeron said. “Once we protect the quarterback, I feel confident in us moving the football.”

Clyde Edwards-Helaire rushed for 134 yards and two scores on 13 carries.

The Tigers still have yet to score fewer than 42 points in a game this season.

“Their ability to run the ball was a big difference,” Mullen said.

Kyle Trask was 23-of-39 passing for 310 yards and three touchdowns for Florida (6-1, 3-1), but was done in by freshman Derek Stingley Jr.’s interception in the LSU end zone in the fourth quarter, when the Gators were trying to tie the game. Soon after, Burrow spotted Chase running free down the right sideline, and a Tiger Stadium crowd more than 100,000 strong was in virtual delirium.

Florida led 28-21 after opening the second half with an eight-play, 75-yard scoring drive that ended with Van Jefferson’s second touchdown catch of the game.

But LSU tied it less than four minutes later on Edwards-Helaire’s 5-yard run. Tryron Davis-Price put the Tigers back in front with a 33-yard run on LSU’s next possession.

The first half was played to a 21-all tie with Florida using methodical drives to answer each of the first three touchdowns scored by LSU’s high-octane attack.

After Justin Jefferson’s 7-yard TD catch capped a five-play drive that covered 82 yards in just 2:09, Florida answered with a 13-play drive that consumed nearly seven minutes, ending with Emory Jones’ fourth-and-goal pass under pressure to Lamical Perine, who deftly corralled the ball after it was tipped by linebacker Patrick Queen.

LSU took the lead just 1:29 later when Edwards-Helaire scored on a 39-yard run, and Florida tied it again with an 11-play drive that finished with Van Jefferson’s first touchdown on a 6-yard pass from Trask.

While Florida methodically ground out four 75-yard scoring drives, including three that lasted at least 11 plays, LSU struck quickly. The result was a significant disparity in time of possession that was bound to exhaust LSU’s defense. The Gators wound up possession the ball for 38:19, while LSU had the ball for 21:41.

Florida: It’s hard to question’s Trask’s toughness or poise. He did not appear bothered by the knee injury he played through last week, and his composure was evident in his first SEC road start at one of the loudest and difficult places for a visiting team to play in college football. The offense rarely failed to get plays off cleanly. Trask mostly threw accurately and scrambled effectively when needed. Orgeron called Trask’s performance “phenomenal.”

LSU: While the offense remained prolific against the best defense it’s faced this season, the Tigers’ defense had its share of struggles for the third time in as many games against a major conference opponent. An increase in stunts and blitzes in the second half produced more pressure on Trask, who was sacked once each by Marcel Brooks and K’Lavon Chaisson. That helped the Tigers pull away late and hold on.

“What a great job by our defense to only allow seven points in the second half,” Orgeron said, applauding defensive coordinator Dave Aranda for making “tremendous adjustments.”

LSU should move up into the top four after No. 3 Georgia lost to South Carolina. Florida should not drop too far after a competitive showing on the road against a top-five team.