COOPERSTOWN, NY — When all was said and done, it came as no surprise that this crowd, with its wild cheering, appreciative applause and standing ovations for six new electees, would be one of the largest in the history of National Baseball Hall of Fame Induction Ceremony.

In the ceremony held under ideal conditions – party sunny, a slight wind and temperatures right around 70 degrees – at the Clark Sports Center, located about a mile south from the Hall of Fame, an estimated 53,000 fans came to witness this annual rite. Only the 2007 Induction Ceremony, which hosted 82,000 fans, drew more fans.

A record 57 Hall of Famers – including the Class of 2018 – attended the Induction Ceremony. The six newest members of this exclusive fraternity would speak of their families, thank teammates, coaches and managers, have a lip quiver at the emotional moments, and try their hardest to put into words what being a Hall of Famer now means to them in front of a national television audience on the MLB Network.

The festivities began to the sounds of John Fogerty’s “Centerfield” rolling over the pastoral setting, then Jones took the podium as the day’s first speaker.

“All my friends have been telling me for the last week or so: ‘Relax, take a deep breath, you’ll do just fine.’ My reply: ‘You stand up here in front of 40- or 50,000 people and 60 of your favorite baseball players sitting behind you, and let me know how you’d do,’” Jones said.

“You know, every person on this stage has had a group of people who believed in them from the start, whether it was before they had achieved much in baseball yet, or whether they just needed a little extra kick in the butt; that person that believed in them when the game or life had humbled them or had them down. Those are the people I want to thank here today because they are the ones responsible for me being on this stage. You all made this possible.” 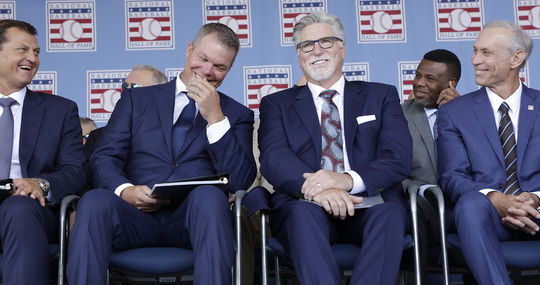 Jones would later talk of his wife Taylor, who is pregnant with a son that is due to be born any day.

“I didn’t meet my wife, Taylor, until I was 40 years old, playing my last year with the Braves in 2012, but she changed my life forever. Now we’ve taken our two families, blended them together, and it’s given me what I’ve been searching for my entire life, true happiness,” he said. “Taylor is due any minute with our second boy. We decided to name him Cooper in honor of this occasion. Cooper will give us seven boys altogether.”

Trammell batted second on this day’s lineup and talked of receiving what many may consider a life-altering phone call.

“When people ask me where were you when you received your phone call from the Hall of Fame, I tell them Jane (Hall of Fame Chairman Jane Forbes Clark) called while I was standing in the aisle deplaning for my flight to the Winter Meetings. You can’t make that up. That’s how it happened,” Trammell said. “How do you really describe your emotions in a time like that? I wanted to jump up and down, yell and scream, but I didn’t think that would be appropriate to do that in the aisle of a plane. My mind was racing, I was overwhelmed, it was unbelievable.

“But those words aren’t enough. Seven months later, they’re still not enough. Thank you to the Modern Baseball Era Committee for selecting both Jack (Morris) and I into this year’s class. Honestly, I didn’t think this day would ever come. But knowing that the voting committee included many of our peers makes this even sweeter.” 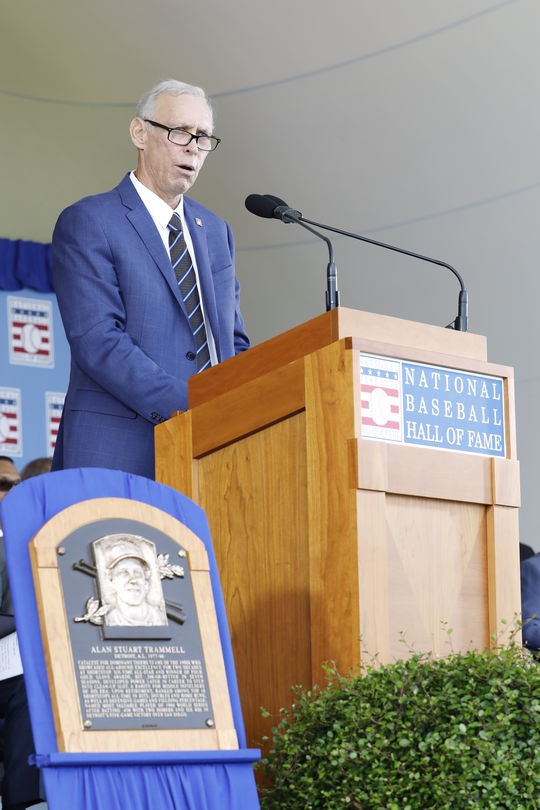 A Tiger for life, Alan Trammell shared his appreciation of the support of former teammates, executives and fans during his Induction Speech. (Milo Stewart Jr./National Baseball Hall of Fame and Museum)

Trammell ended his speech reflecting on the future.

“One day this incredible journey will all sink in, and my current role as a special assistant to the general manager, I feel I can speak for the entire Tigers’ organization and for all Tigers fans, that going into the Hall of Fame wearing the Old English D makes us all very proud,” he said. “I feel truly honored to be on Major League Baseball’s dream team. To everyone here in Cooperstown and watching at home, thank you very much for being a part of this special day for me and my family. Thank you.”

Guerrero’s speech – given in Spanish with a translator also delivering it in English – may have been the shortest of the six, but no less emotional.

“When I was a player, I always mentioned that I wanted my bat to do the talking, but now that I’m not playing, I’m very happy to be standing here and talking to you,” he said. “I know I don’t speak a whole lot, but let me tell you that I am so happy to be part of this group because some of them I saw and watched play and I witnessed it, but also I got to play against a lot of them, and it means a lot to me. 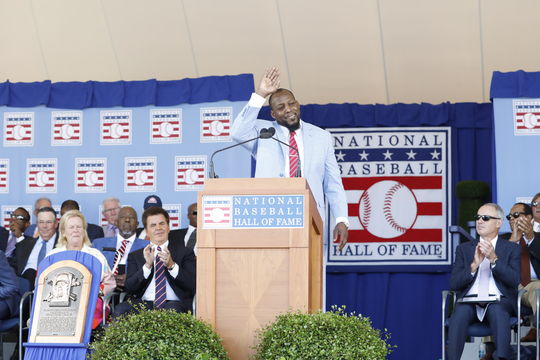 Vladimir Guerrero waves to the crowd after delivering his Induction Speech. Many fans traveled from the Dominican Republic to see the Dominican-born Guerrero. (Milo Stewart Jr./National Baseball Hall of Fame and Museum) 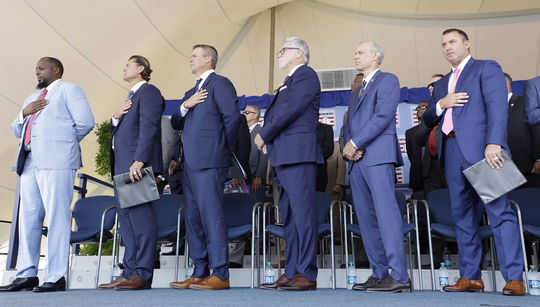 Hoffman gave an eloquent recap of his career and thanked his family and friends.

“When I was a struggling shortstop in a Cincinnati organization three decades ago, I could have never imagined being here today. My transformation from an infielder to relief pitcher to closer, it’s been an amazing journey capped by this amazing moment,” Hoffman said. “We stand here at the doorstep of one of the great shrines of all of sports. Each member of the Hall of Fame has a unique story, not only those who are already enshrined, but those who will join us in the future.”

Hoffman would end with a simple farewell: “Thank you all for allowing me to share this beautiful day with you all. And in closing, to achieve true success, there are no shortcuts.” 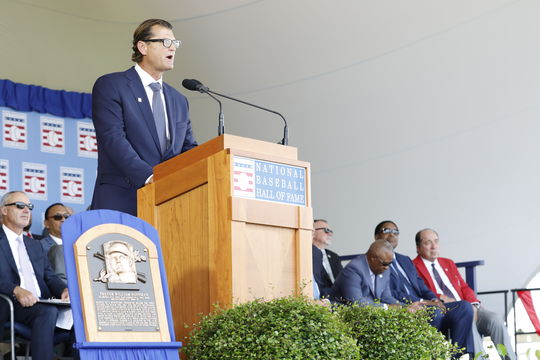 In his Induction Speech, Trevor Hoffman spoke about the support of his family throughout his 18-year big league career. (Milo Stewart Jr./National Baseball Hall of Fame and Museum)

“To the committee who voted me into the Hall of Fame, thank you so much. It is extra special to me to be selected by my peers, the people I played with and competed against.”

Morris would later state that: “With age comes more aches and pains, gray hair, if you’re lucky, but also wisdom and perspective. The game has always been a part of who I am and what I have become. It has somehow been connected to almost every lesson that I’ve learned in life. To be successful, I believe it takes practice, patience, focus, concentration, work ethic, desire, determination, trust, will and confidence, and more practice. 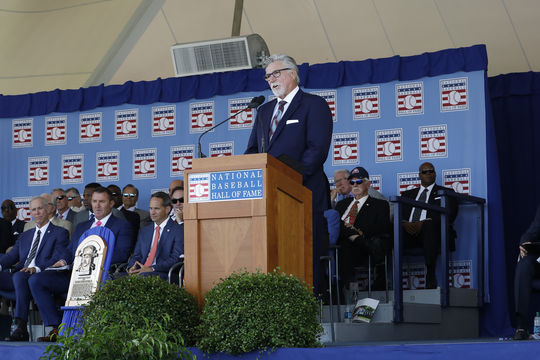 Jack Morris fought back the tears as he delivered an emotional Induction Speech on Sunday, July 29. (Milo Stewart Jr./National Baseball Hall of Fame and Museum)

“Many say that baseball is known as a game of failure. I had plenty of challenges and failures, but it only made me work harder to find a path to success. It also didn’t hurt to have a short memory. Work can be rewarding as long as you keep your goals attainable,” he added. “Whether in Little League or in the big leagues, I would encourage all baseball players to learn the history of our game. Learn about the great players behind me. Learn about the owners and the history of the players union. Only then will you have a better understanding of who you are and where you fit into its history.”

According to Thome, the last speaker during the nearly three-hour ceremony, “These last few months have been an absolute whirlwind for a kid that grew up in Peoria, Ill., hitting rocks in our gravel driveway on South Crest Drive with an aluminum bat until my family and neighbors couldn’t take it anymore. This is the ultimate dream come true.

“I was only in college for a short time before being drafted, but I can’t imagine that any fraternity experience I could have had would have been better than this one. This is the ultimate fraternity.”

In closing, Thome said, “My experience has taught me, if you try to conduct yourself with authenticity and honesty, the end result is one of the most natural highs any human being can have. 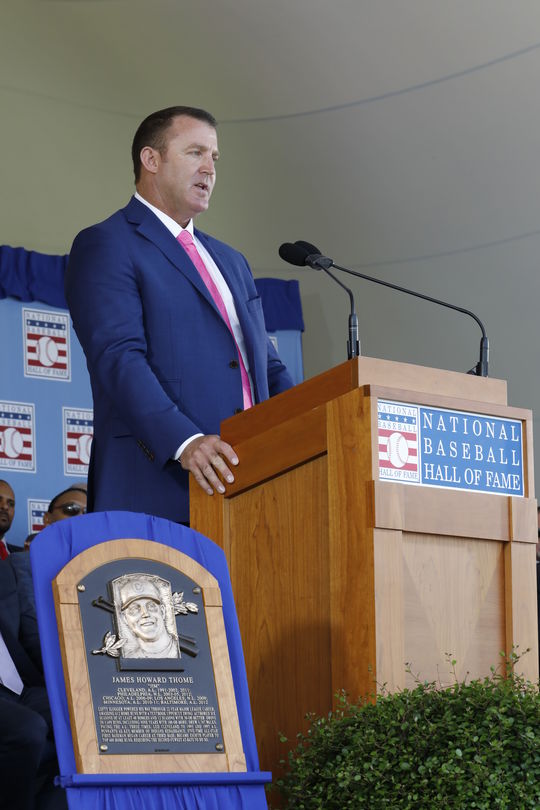 Jim Thome expressed his appreciation of his new place in baseball royalty in front of many family members, friends and fans. (Milo Stewart Jr./National Baseball Hall of Fame and Museum)

“I’m so honored to be a part of something so special, something greater than the individual. It’s been my great privilege to have played the game for as long as I did. And I can say this with certainty, the possibilities are just as important as the outcome. In living the dream that is Major League Baseball, the best part is not the result, but taking the journey with the people whose contributions make it all possible. Baseball is beautiful, and I am forever in its service. Thank you.”

The National Baseball Hall of Fame’s 2019 Induction Weekend will take place July 19-22, with the Induction Ceremony scheduled for Sunday, July 21.