Preparation should be wrapping up, the latest on T.S. Barry 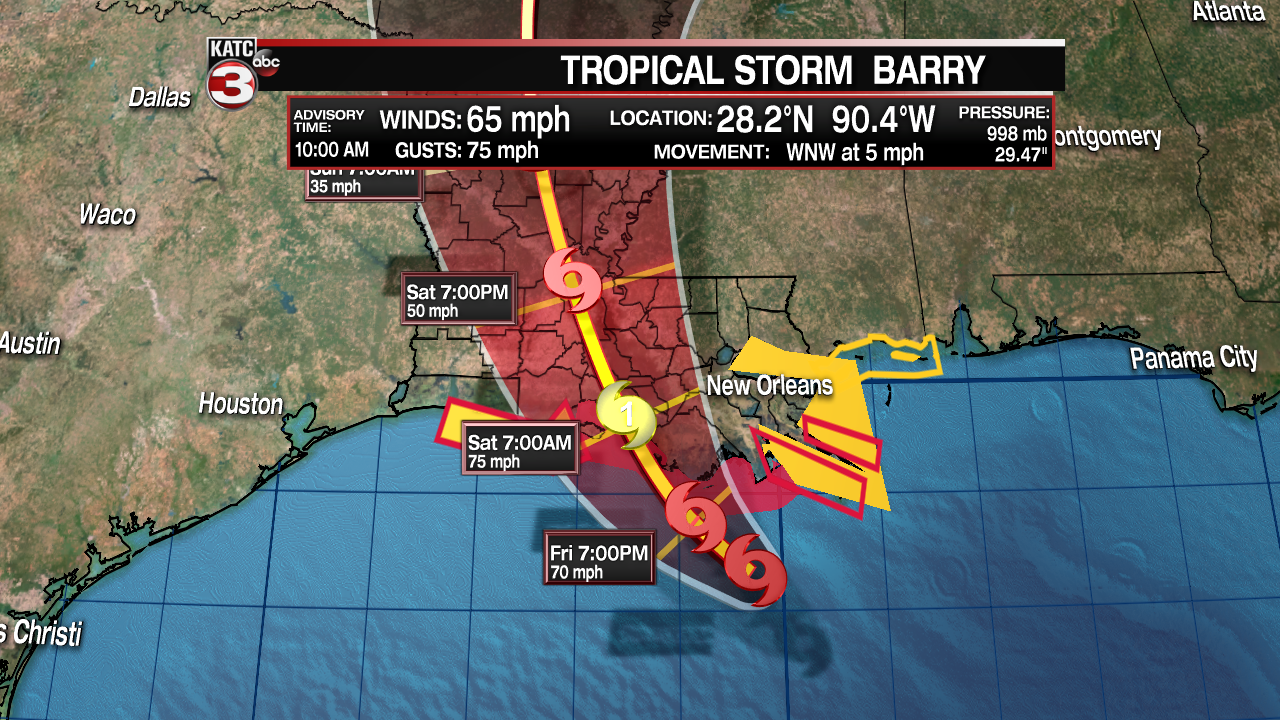 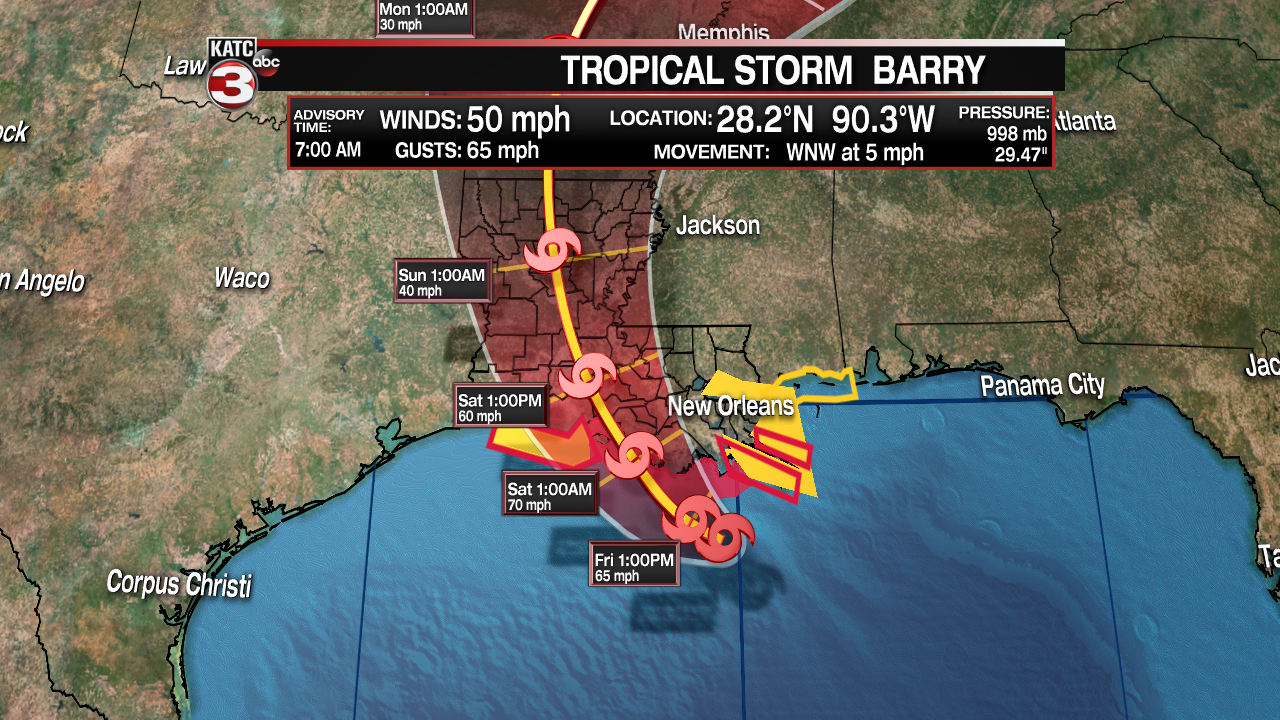 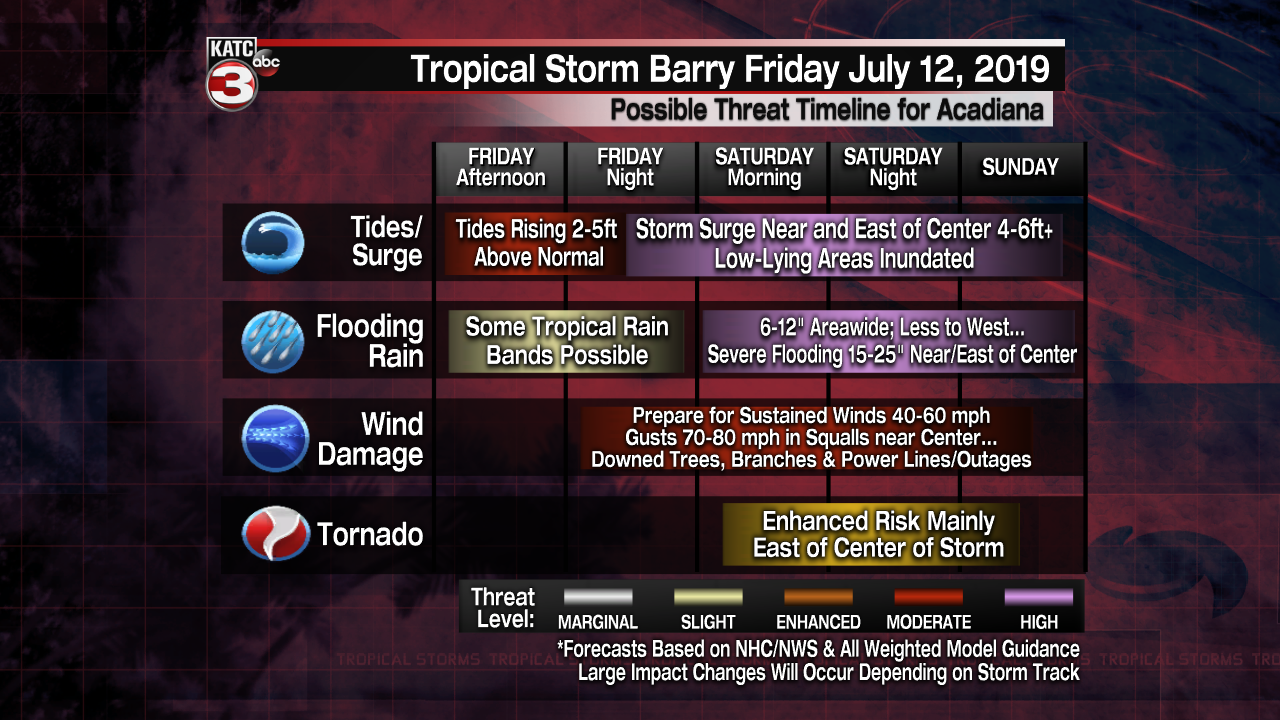 Daniel's 10 am update on TS Barry

Models are showing a little more consistency from one run to the next, and while there's still a gap between the EURO and the GFS, the focus Friday will be on the EURO model, which has been a little more consistent. There weren't any overnight surprises in regard to Tropical Storm Barry, landfall is expected Saturday morning in St. Mary Parish. Barry will make landfall as a strong tropical storm/category 1 storm with winds around 70-75 mph. There hasn't been much of a change with the early morning bulletin but it does look like Barry may be starting the strengthening process (which we anticipated).

The major talking points haven't changed significantly since Thursday but they are worth repeating and going over as it appears increasingly likely that widespread major flooding will occur somewhere in south Louisiana. As Barry comes onshore around and just east of the center will be a deluge of heavy rainfall, producing 15-20" of rain over a fairly wide area with localized amounts that push up to 25". The hard part is figuring out exactly where this swath of heavy rain will occur. The last several model runs have brought this batch of rain along and just east of the Atchafalaya Basin through Baton Rouge, including portions of south St. Mary Parish. As a whole Acadiana needs to brace for 6-12" of rain area wide, with slightly lesser amounts occurring on the western edge of Acadiana. This is still a massive amount of rain, and while it may not be the heaviest part of this storm it's too close for comfort. A slight deviation in the track of this storm by 20-50 miles (well within the margin of error) could bring those 15-25" rains into Acadiana.

Tropical storm force winds (35mph+) currently stretch 175 miles out from the center of the storm, primarily on the southern edge of the system. Expect almost all of Acadiana to receive tropical storm force winds which will begin to arrive overnight Friday into early Saturday morning. Close to hurricane strength winds will creep into Morgan City near daybreak Saturday expect winds to be between 70-75 mph, so anticipate power outages as the winds begin to worsen. It's been a long time since Acadiana has had a direct or close to direct hit so be aware of weaker vegetation and falling trees.

Storm surge will be an issue immediately along the coast line and residents along Vermilion Bay, the St. Mary and Vermilion Parish coastline should anticipate a storm surge of 4-6 ft with the possibility of surge reaching close to 8 ft near the center of the storm. Remember that not only will the water come up but then add on top of that impressive wave heights in addition to the surge as it comes on shore. It should be fairly obvious that the waterways should absolutely be avoided.

As the rain bands move through be aware of the potential for isolated tornadoes, these can be very difficult to spot so pay attention to the weather going on outside. Spin up tornadoes that are short lived to occur in these types of storms and aren't always detectible by radar. Rain bands will be persistent through the night Friday and the day on Saturday.

All preparation by now should be complete with any last minute clean up wrapping up Friday morning and by Friday evening everyone should be braced and ready for the weather to worsen. As information becomes available the entire staff at KATC will work quickly and diligently to get that to you as soon as possible. Heed all local emergency alerts and warnings, and be sure to stay on top of any changes in the forecast. If you should lose power or cable/satellite you can catch any of our coverage on katc.com/live. Be sure that you are receiving your information from reliable sources such as Storm Team 3, the National Weather Service, or the National Hurricane Center.