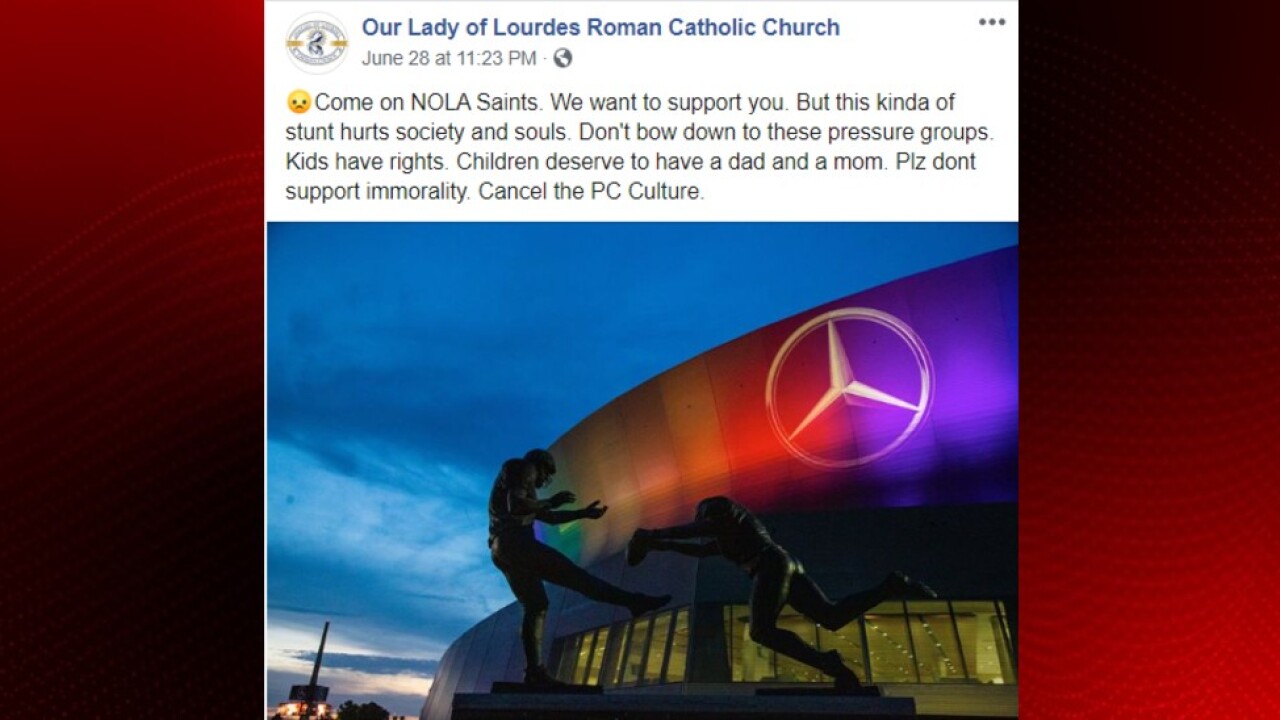 Lafayette Bishop Douglas Deshotel has issued a statement about a controversial post on a local church's Facebook.

The post, on Our Lady of Lourdes Roman Catholic Church's Facebook page, is critical of the Superdome's Pride Month display:

"Come on NOLA Saints. We want to support you. But this kinda of stunt hurts society and souls. Don't bow down to these pressure groups. Kids have rights. Children deserve to have a dad and a mom. Plz dont support immorality. Cancel the PC Culture," the post states.

There are hundreds of comments on the post, many critical of it, and some from people who say they attend services there.

After receiving calls and messages about the post, we reached out to the Diocese, and received the following response:

Bishop Douglas Deshotel and the Diocese of Lafayette have been made aware of a recent social media post concerning the Mercedes-Benz Superdome and the Smoothie King Center.

In response, Bishop Deshotel references Paragraph 2358 of the Catechism of the Catholic Church: “The number of men and women who have deep seated homosexual tendencies is not negligible. They do not choose their homosexual condition; for most of them it is a trial. They must be accepted with respect, compassion, and sensitivity. Every sign of unjust discrimination in their regard should be avoided. These persons are called to fulfill God’s will in their lives and, if they are Christians, to unite to the sacrifice of the Lord’s Cross the difficulties they may encounter from their condition.”

The church issued a statement in response to media coverage of the post Tuesday night.

In it, an unidentified speaker explains the concept of Jesus' heart, love, and the Trinity. He says that those since Jesus loves "us so much, we in turn love each other." He adds that even though there are some who says the church is full of hate because of its teaching, it's not true.

"We don't hate you, we love you. That's why we preach what we do. It's not about exclusion, it's about saving souls," the speaker adds.

The speaker finishes by asking listeners to not point a finger and say the church or the parish is full of hate or judgment.

"If you don't agree with the church's teachings, we'll agree to disagree," he says, adding that those in disagreement should ask God to reveal the truth to them.

You can watch the full statement from the church below.