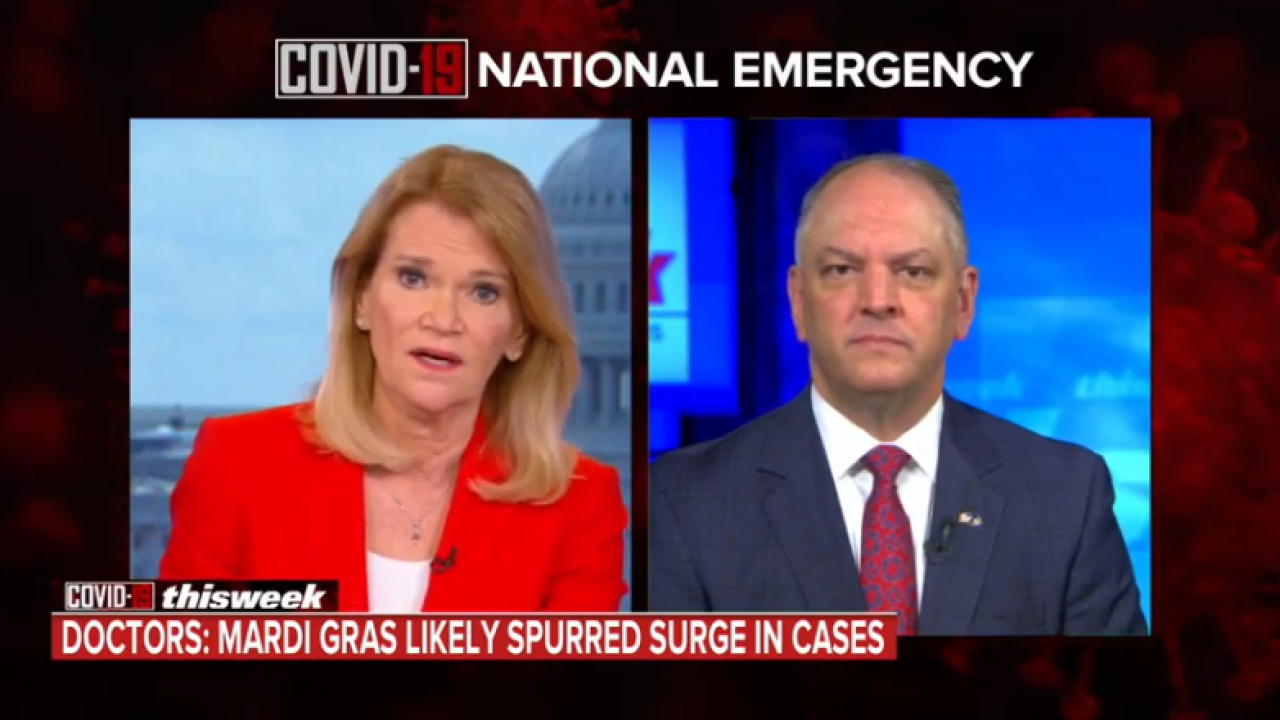 To see the video, scroll down.

Edwards was asked about the role Mardi Gras played in Louisiana's high infection and death rates - the state has the third-highest per capita infection rate and the second-highest death rate in the country - and about New Orleans Mayor LaToya Cantrell's statement that she didn't cancel the event because the federal government said the virus was contained.

"There was never any hint from anyone to me or the mayor of New Orleans that there should be any consideration to downsizing or canceling Mardi Gras," the governor said. "If you look back, at that time we had 15 cases in the country, all tied to travel. There was never any hint of this, and if you go back, you will see the federal government was saying things were well under control.

"This is Monday-morning quarterbacking going on. I believe it's likely Mardi Gras contributed to the seeding of the virus in and around New Orleans. But that's looking back. Right now we need to spend our time and energy focused on what we can do moving forward."

Edwards said Louisiana's spread is much faster than anyone would like to see, and predicted if it doesn't level off the state's health care system will be overwhelmed by next week. The most critical issues are staffing and ventilators.

Louisiana has been ordering tens of thousands of ventilators, but so far has received only 192, he said. Those orders and requests have been to private businesses and to the federal stockpile, he said.

Edwards said his message to the people of Louisiana is no different than that of states like New York and New Jersey.

We need people to practice these distancing and mitigation measures, and follow the shelter in place order we have statewide," Edwards said.

People need to take those actions now, he said. It will be days before we know if the measures in place are helping, he said.

"I didn't say we're not enforcing this. What I said was, don't look for us to come enforce this, because you need to take it upon yourself to comply," he said. "It's not that we won't eforce these measures. We shouldn't have to."

Edwards on ABC
Copyright 2020 Scripps Media, Inc. All rights reserved. This material may not be published, broadcast, rewritten, or redistributed.