The visit is a tradition for the finalists on the televised talent program; the final contestants visit their hometown for a parade, a performance and other events. Hardy, who is from Livingston, was elected to the final three on last night’s program. To see that story, click here.

Hardy’s visit will be tomorrow, May 14.

He’ll start early, with a meeting with Gov. John Bel Edwards at the Governor’s Mansion in Baton Rouge.

Hardy will perform in concert at 6:30 p.m. at the Fairgrounds. The address is 19869 Fairgrounds Rd, Livingston, La.

Attendees are asked to park at the Livingston Parish Fairgrounds & walk to line the route. (Fairground gates will open at 3pm to allow parking prior to parade.)

The Florida Boulevard entrance will be the ONLY entry into the fairgrounds; Deputies will be on site to direct for parking.

There will be NO PARKING along the route, which starts at the post office, travels down Hwy 63, turns left on Hwy 190 and proceeds to the fairgrounds. 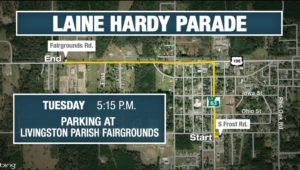 Hardy was on last season’s program but was eliminated early. Then he showed up to play guitar for a friend who was auditioning for this season’s program. The judges recognized him, demanded a song, and he blew them away. So they gave him a golden ticket, too.

This year he’s been doing much better, and earning weekly kudos from the judges. Last week, he was elected to the final four – which ended up being five after the judges decided to save another contestant from elimination.