The man wanted in connection with the death of a Baton Rouge nurse has been arrested. 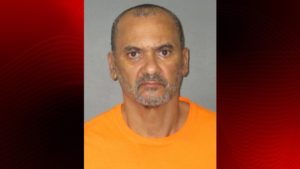 According to arrest reports, 54-year-old Jessie Guillory was arrested and booked on Tuesday, April 23 into the East Baton Rouge Parish Jail on a charge of manslaughter.

Guillory was wanted following the death of Baton Rouge nurse Lynne Truxillo. He is accused of attacking Truxillo while a patient at the Baton Rouge General Mid City Behavioral Health Unit in early April. Truxillo injured her leg in the attack which caused traveling blood clots to form, according to an arrest report.

The coroner’s office ruled that Truxillo’s death on April 11 was a direct result of the attack by Guillory.

An arrest warrant was issued Tuesday, April 16 for a patient accused of attacking a Baton Rouge area nurse. That attack, which occurred April 4, led to the death of the nurse several days later, according to the East Baton Rouge Coroner’s Office.

In the report, the coroner found that nurse Lynne Truxillo died as a result of blood clots that formed in her right leg from an injury she sustained during the attack.

An arrest warrant for manslaughter has been issued for Jessie Guillory, 54, of Lake Charles in connection with Truxillo’s death.

According to the warrant, Guillory entered a nurse’s station at the Baton Rouge General Mid City Behavioral Health Unit and initiated an altercation with a nurse on duty.

The warrant states that Guillory became violent and charged one of the nurses, pinning her into a corner and swinging his arms while trying to grab her. Truxillo, who was on shift at the time, pulled Guillory away from the nurse and was then attacked. The warrant continues that Guillory grabbed Truxillo by the neck and violently pushed her down where she struck her head on a desk. Truxillo also injured her leg in the altercation.

Guillory was eventually brought under control by other nurses.

The arrest warrant states that Truxillo was medically evaluated for the injuries she sustained. It was determined during that evaluation that she would need surgery to repair an injury to her right ACL.

On April 11, Truxillo was admitted to Baton Rouge General after experiencing breathing problems. According to the warrant, Truxillo went into cardiac arrest several times before doctors were unable to revive her.

An autopsy concluded that Truxillo died from a traveling blood clot that formed in her right leg due to injuries she sustained in the altercation. Following that autopsy, detectives began investigating the incident as a homicide.