The Coast Guard rescued two people from a sailboat that was sinking in the Gulf of Mexico, about 20 miles south of Venice. 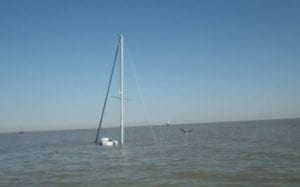 The crew of Coast Guard Cutter Skipjack received a report at 8:30 a.m. Wednesday of a sailboat taking on water approximately two miles from the cutter.

The cutter crew arrived on scene at 8:56 a.m., rescued the two people and transported them to Coast Guard Station Venice in stable condition.

The sailing vessel sank after the rescue.

“Accidents can happen at any time on the water, which is why it is so important for mariners to be prepared for the worst,” said Cmdr. Michael Wolfe, a search and rescue mission coordinator at Coast Guard Sector New Orleans. “The survivors were wearing life jackets and were able to contact the Coast Guard in a timely manner because they brought reliable forms of communication.”