Updates from KATC’s Weather Team can be found here

A hurricane warning has been issued for portions of the central U.S. Gulf Coast as Tropical Storm Gordon approaches.

The National Hurricane Center in Miami said in its 5 p.m. EDT advisory that it expects Gordon to be a hurricane when it reaches coastal Mississippi and Louisiana sometime late Tuesday.

A hurricane warning is in effect for the area stretching from the mouth of the Pearl River in Mississippi to the Alabama-Florida border.

The storm is centered about 50 miles (85 kilometers) west-southwest of Fort Myers, Florida, and moving west-northwest at 17 mph (28 kph). After making landfall, it is expected to move inland over the lower Mississippi Valley on Wednesday. 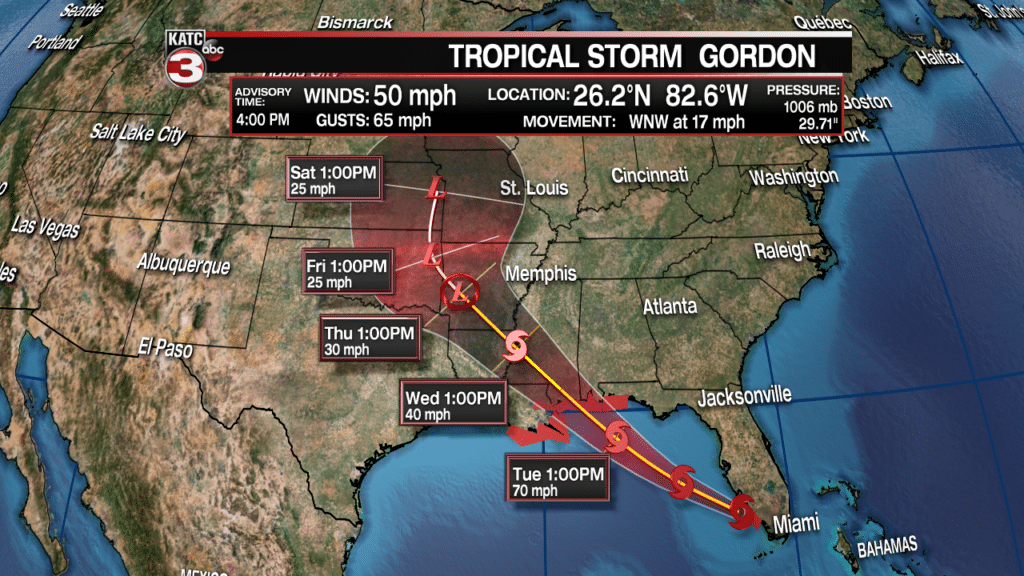 Gordon formed into a tropical storm near the Florida Keys early Monday as it moved west-northwest at 16 mph (26 kph). The storm was expected to reach coastal Mississippi and Louisiana by late Tuesday and move inland over the lower Mississippi Valley on Wednesday.

The National Hurricane Center in Miami said at 2 p.m. EDT that the storm was centered 15 miles (25 kilometers) west-southwest of Marco Island on Monday. Maximum sustained winds were clocked at 50 mph (85 kph).

A #Hurricane Warning has been issued from the mouth of the Pearl River eastward to the Alabama/Florida border for #Gordon. See the latest advisory at https://t.co/tW4KeGdBFb pic.twitter.com/AXjo4z4Hic

Miami Beach Police said via Twitter that the Labor Day holiday was “NOT a beach day,” with rough surf and potential rip currents. Red flags flew over Pensacola-area beaches in Florida’s Panhandle, where swimming and wading in the Gulf of Mexico was prohibited. More than 4,000 Florida Power & Light customers lost power Monday due to weather conditions.

The National Weather Service said current conditions were “somewhat favorable” for tornadoes in affected parts of South Florida on Monday.

The storm left many businesses on Florida’s Gulf Coast feeling shortchanged by the holiday weekend. The area has already been heavily impacted by this summer’s so-called “red tide”- massive algae blooms that have caused waves of dead marine life to wash up along the coast.

Jenna Wright, owner of a coffee shop in Naples, Florida, told the Naples Daily News that she had expected higher numbers for the Labor Day weekend.

“This is normally a decent weekend, but the storm and red tide aren’t helping,” Wright said. “We’re a beach coffee shop, and if people can’t go to the beach, then we won’t get any customers.”

A hurricane watch – meaning that hurricane conditions are possible – was put into effect for the area stretching from the mouth of the Pearl River in Mississippi to the Alabama-Florida border.

The Miami-based center said the storm is also expected to bring “life-threatening” storm surge to portions of the central Gulf Coast. A storm surge warning has been issued for the area stretching from Shell Beach, Louisiana, to the Mississippi-Alabama. The warning means there is danger of life-threatening inundation. The region could see rising waters of 3 to 5 feet (0.9 to 1.5 meters).

“The deepest water will occur along the immediate coast near and to the east of the landfall location, where the surge will be accompanied by large waves,” the center said.

At a press conference Monday afternoon, New Orleans Mayor LaToya Cantrell said the city has “the pumps and the power” needed to protect residents. But authorities issued a voluntary evacuation order for areas outside the city’s levee protection system, including the Venetian Isles, Lake Saint Catherine and Irish Bayou areas.

Cantrell urged residents within the levee protection area to stock up on supplies and shelter in place.

New Orleans director of emergency preparedness Collin Arnold warned city residents the storm has the potential to turn into a “low-level hurricane” with winds of up to 70 mph (113 kph).

Separately, Tropical Storm Florence continues to hold steady over the eastern Atlantic. Forecasters say little change in strength is expected in coming days and no coastal watches or warnings are in effect.

Average forecast track error 36 hrs out is roughly 50nm, 24 hrs~40nm. Average 24-36 hr intensity forecast errors can be a whole category off, especially with developing systems in the Gulf, but range is generally 9-12 kts respectively for all #NHC performance 2010-2017. #Gordon pic.twitter.com/4Wox2yJDVi