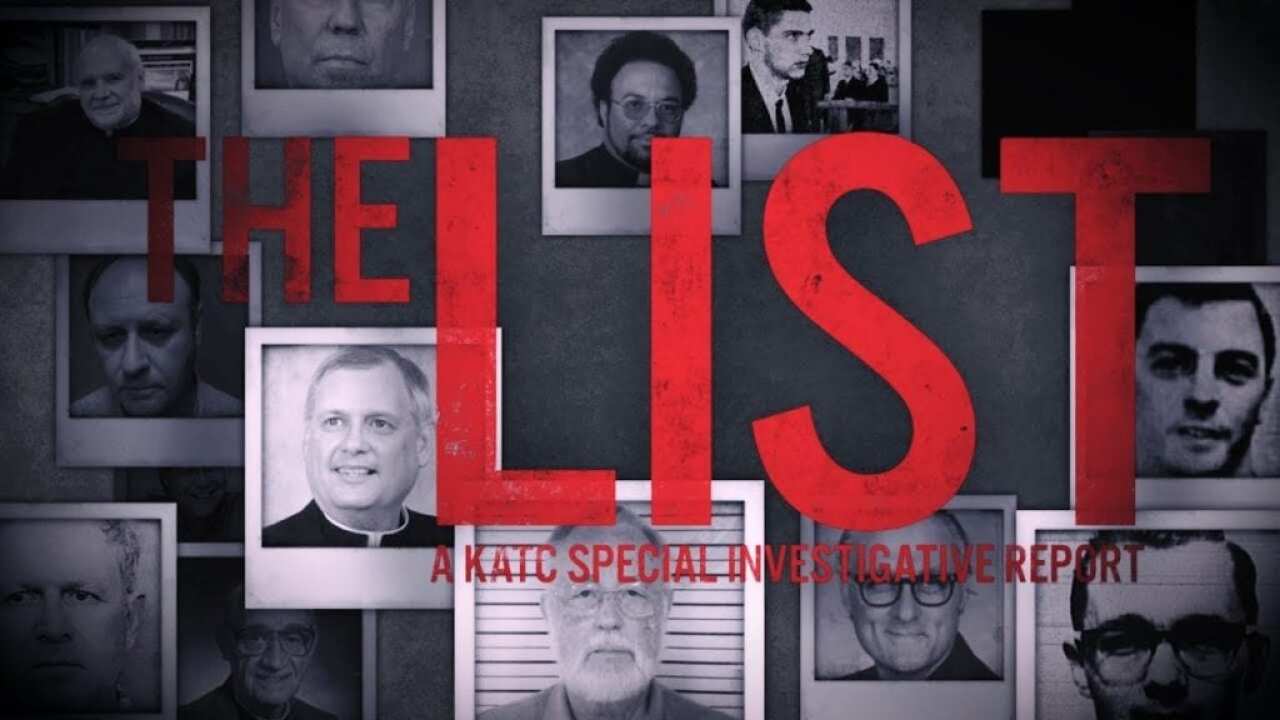 Fifteen years after acknowledging it exists, and months after promising its release, the Diocese of Lafayette still had not released a list of priests who have faced credible accusations of sexual abuse involving children. KATC Investigates  broke that silence, and releasing its own list.

The "list" was first acknowledged by the Diocese of Lafayette in February 2004 by former Bishop Michael Jarrell; our reporters have been requesting the diocese disclose those names since then.  They refused until last fall, when Bishop Douglas Deshotel joined other dioceses in the state in making the pledge to release them.

KATC Investigates started by putting together a list of priests and church employees who have been accused of sexual abuse. Our producers and reporters then scoured thousands of pages of documents - all public records - to find support for these accusations in the form of criminal charges, civil suit settlements, diocese statements and court case evidence. Some of those records are recent, some decades old.

The number of people on KATC's list will differ from the number of people on the Diocese of Lafayette's list, because of differing criteria. For instance, the diocese list does not include people identified by the Jesuits as having credible accusations, even though some were serving as priests at churches in the diocese. KATC also included people who were identified by other dioceses as having credible accusations, if they also served in Lafayette Diocese churches.  We are continuing to add to our list as more dioceses publish their own findings.

While we have continually run up against roadblocks - some cases remain sealed, some have been destroyed - we still found more than twice the number of credibly accused priests that Bishop Jarrell acknowledged in 2004.

The second and third part of our series asks if the Diocese has kept its promise and whether they are as transparent and open as they say they have been.

A KATC Special report , a 30-minute documentary entitled The List aired on KATC. All stories from our work on The List can be viewed at KATC.com/thelist

Those who made our list had to have served in the Diocese of Lafayette and had to meet one of the following criteria:

DISCLAIMER: Although the men included on this list have had a credible allegation made against them, this list should not imply the allegations are true or that the individual has been found guilty or is liable for civil claims.

(27) Priests named by any diocese or religious group as having a credible accusation of sexual abuse by a minor or vulnerable adult:

(9) Priests that were arrested, convicted, or law enforcement publicly announced that they were under investigation:

(12) The diocese settled a lawsuit filed against them that included an accusation of abuse:

(3) Priests with the Lafayette diocese who had credible accusations filed by an adult victim:

(3) Priest with credible accusations with ties to the Lafayette diocese

(3) People who meet one of the above criteria and were affiliated with the diocese, but weren’t members of the clergy

Accused in other Diocese

Here are the lists released from other Diocese in Louisiana.

The sexual abuse of children by priests in the United States didn’t start with Gilbert Gauthe, but the public discussion and acknowledgement of it did – making the Diocese of Lafayette ground zero for a 30-year crisis.

Gauthe was ordained in 1971 and later testified that he began molesting children immediately. Within a year of his first assignment, complaints were made to the Lafayette diocese.  What followed was, in many ways, a case study for the Church’s failure to properly handle child sex abuse by priests. Every time complaints were made, Gauthe was sent to counseling, and then to a different parish – without any warning to the families there. This went on for 10 years, and ended with lawsuits that cost the church millions and a 10-year prison sentence for Gauthe. He once estimated that he molested hundreds of children.

Within two years of Gauthe’s conviction the abuse of children by Catholic clergy was perceived to be a crisis nationwide, and in 1986 the U.S. Conference of Catholic Bishops met to adopt a response plan. That plan offered general advice only, and is largely considered to be a failure.

In 2002, the Conference met again on the issue and this time adopted a charter document that states no one known to have sexually abused a child will work in the church. They apologized to everyone who was harmed by priests and by the church’s “tragically slow response.”

However, the bishops refuse to state that all credibly accused priests will be defrocked, a disappointment to victims’ groups. In 2011, that charter was revised to add concrete rules and requirements for individual dioceses aimed at ensuring complaints were handled quickly, ethically and transparently.

The Diocese of Lafayette has committed to release the names of the clergy who have credible accusations of sex abuse against them.  Bishop Douglas Deshotel made the announcement with four other bishops in October of 2018.

“Disclosure of that list is a good idea to foster healing and provide assurance that no one accused of abuse is currently serving in the ministry,” Deshotel said. “Because of the extent and complexity of the research, the process will take time and it’s impossible to predict precisely when that process will be completed.”

It should be noted that Deshotel’s promise to release the list came more than 14 years after former Bishop MIchael Jarrell acknowledged that the list existed.

Following the release of names from the Houma-Thibodaux diocese, Bishop Deshotel issued the following statement:

“Our Diocese, along with others across the state, is currently engaged in extensive and complex research to compile an accurate list of priests credibly accused of abuse of a minor or vulnerable adult and removed from ministry. We intend to release that list as soon as the process of examining 50 years of clergy files very closely and carefully is completed.”

How to get help

KATC recognizes that hearing these stories will trigger memories and anguish for victims.

If you’ve been the victim of a sexual assault and you need help, there is help available.

We’ve put together a list of locations to find help, and numbers to call for help. You can find it here

If you believe that a crime has been committed, please call your local law enforcement, or dial 911