Beta meanders through the Gulf, Watches up along the coast 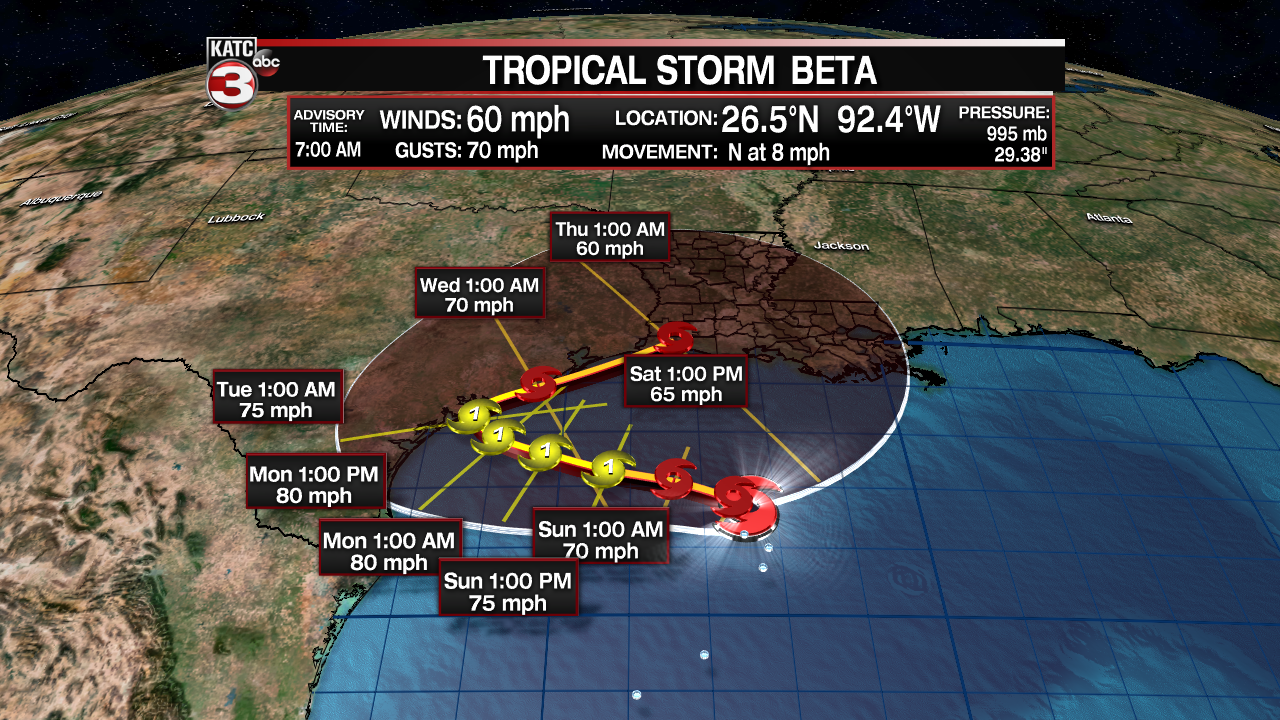 As the dust settled on a wild week in the tropics we were left with yet another storm in the southwest Gulf of Mexico and Tropical Storm Watches were yet again posted for the Louisiana coastline, a result of Tropical Storm Beta.

As of the 7:00 a.m. update from the National Hurricane Center Beta is expected to slowly strengthen as it meanders to the Texas Coast, from there it look like the storm may ride up the Texas coast and into Louisiana.

There is, however, a considerable amount of nuance to the forecast and we will get into some of that through out the rest of the article.

A drifting storm is always going to be a difficult one to predict, it opens itself up to small influences having out sized impacts on the storm and that seems to be the case with Beta, which will spend its life fighting back some dry air and shear to the west.

While those factors may limit the overall strength of the storm there is still an argument to be made, and model support, for Beta to become a hurricane by landfall which won't be until Monday along the central Texas coast.

That initial landfall will be the most important moment to determine where the storm goes, if it makes it far enough inland the storm will lose it's strength and be overtaken by dry air, however, many of the models paint a different scenario.

The other possibility, as indicated by the NHC, has the storm stay just along the coast and maintain tropical status before moving north toward south west Louisiana by the middle to end of the upcoming work week.

This is the kind of scenario that would then bring flooding rains to both coastal Texas and Louisiana as the storm seems to continue to be slow moving through its entire life cycle, heavy rains look like this storms most significant threat even for areas east of the center.

It's a little to early to say with any certainty how much rain Acadiana may be on the hook for but the early indications point to roughly 4-6" through out the week, disconcertingly though much higher numbers lingering just offshore.

The messy nature of this storm means that we may be dealing with moisture and showers from this storm starting this weekend with the worst of the weather still days away though keep in mind we are very early in the forecast process.

We've got a long way to go and with storms like this there are constant changes so make sure you stay vigilant and monitor the forecast for the coming days, and we'll be able to pinpoint and narrow down the forecast a little more each day.