UPDATE: An arrest has been made after several graves were damaged at the Holy Rosary Cemetery.

Chief Joshua Hardy said a 16-year-old boy was arrested on charges of unauthorized use of a motor vehicle, desecration of a grave and criminal damage to property.

The chief said the teen and the owner of the car are related.

The teen was released to his guardian.

Kaplan Police are investigating a crash that left several graves damaged at the Holy Rosary Cemetery.

Someone driving a car at a high rate of speed on the road lost control, ran off the road, then over-corrected, crossed the road and crashed into the graves at the cemetery, he said.

When police ran the plate on the car and went to the owner’s home, the owner said the car must have been stolen, the chief said.

Witnesses say they saw someone running away from the accident after it happened, he said.

Investigators have recovered DNA from inside the car, and the owner and those who live with the owner have voluntarily provided DNA samples for comparison, the chief said.

Anyone with any information or video of the incident or the aftermath is asked to contact the police department.

Here are some photos, submitted by our viewer Nadine Guidry: 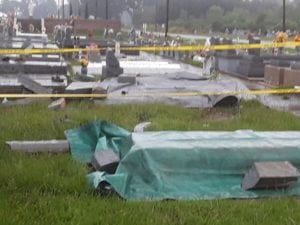 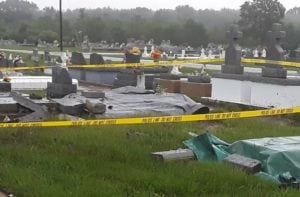