St. Mary Parish Sheriff Blaise Smith advises that a man jumped out of a sixth-floor window at the courthouse. 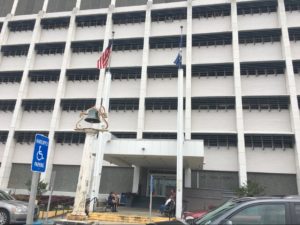 On May 8, 2019, at 9:46 am, the St. Mary Parish Sheriff’s Office received a complaint that a male subject jumped from a window on the sixth floor of the courthouse.

KWBJ reports that the man landed on a metal awning and ran away. The station also reports he was there for a child support hearing.

Witnesses outside of the courthouse say they heard he was facing up to 90 days of jail time.

Upon investigation, it was learned that the subject was due to appear in court this morning, a release from the sheriff states. He went to the restroom and jumped out of the window. He was located a short time later in the vicinity of the courthouse.

Krisite Mcnabb was in the same room as the man. She says he came from the court room to the restroom. Mcnabb said, “About 15 minutes later they (deputies) started knocking on the door.. they knocked again… I was just thinking that man must’ve left.  Finally they get in there and he was gone!”

She added, “Craziness… He flew from the coup!”

The man was injured and was transported to a local hospital via Acadian Ambulance, but there’s no word on his condition, police say.

Witnesses on the scene tell KATC’s Katie Easter that the man received two broken legs and a punctured lung from the jump. Those injuries have not been confirmed with authorities.

No arrests have been made at this time. The matter is still under investigation.

St. Mary Sheriff Blaise Smith said, “Charges are pending, the district attorney is looking at it. We couldn’t charge him with anything because he wasn’t in custody.”

The subject was not an inmate at the time of the incident; therefore, this is not being investigated as an escape.