The fire on Clifton Angelle Road is now out. Officials say the home which is a total loss was vacant. 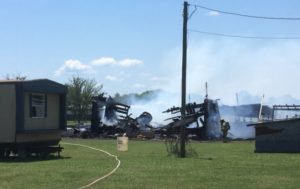 Fire officials say received a call at 10:53 a.m. When firefighters arrived, the home was fully engulfed in fire.

The home was abandoned and vacant; no injuries were reported. The home is a total loss, and it’s too early to tell how the fire started, fire officials say.