While some are comparing the flooding they saw to 2016, others in St. Martin Parish say it has never flooded like this before. Those reports of flooding include a church in Breaux Bridge. 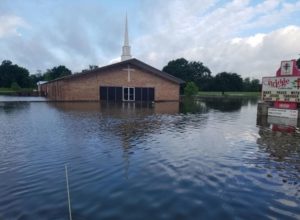 Members of The Bridge Fellowship church on Rees Street say about 4 inches of water was standing inside the building for several hours.

Youth pastor, Kylie Louviere, described the water as thigh high.
“The bottom of my truck comes about this high, and it was right under almost to my engine. So at least 4 inches inside.”

Louviere has been attending The Bridge Fellowship for several years, she says she has never seen it flood.

“The 2016 flood they told me ‘it didn’t flood like that.’ It has flooded, but, before that flood, because it didn’t do that in that flood,” Louviere said.

Just down the road, people in Cecilia are reporting the same thing. One resident, Chuck Hebert was helping his nephew who had water inside his home.

Hebert said, “I’m 51 years old, and we have not experienced this type of rain before.”

He says there were about 8 inches of water outside of his Cecilia home.

“My yard has never had water flooding, but it does this morning,” Hebert said. He says that luckily, water wasn’t in his home. 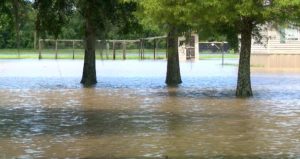 The St. Martin Parish Sheriff’s Office is asking residents with water inside their home, to call their office.

They released this statement:

“If anyone in the Breaux Bridge, Henderson, Parks, Cecilia or St. Martinville areas of upper St. Martin Parish received water inside their home as a result of the flooding that occurred this morning, they are asked to please report it to the St. Martin Parish Office Of Homeland Security and Emergency Preparedness by calling (337) 394-2808.”

For more photos of flooding in St. Martin click here.