UPDATE: A vigil was held Monday to remember Lateisha Sylvester, who died Friday. 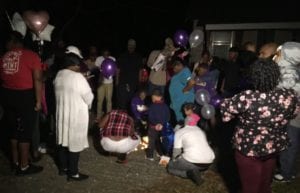 Family and friends have gathered in Breaux Bridge for the vigil.  Tonight,  friends reflected upon Sylvester’s kindness.

“That was my heart. For somebody to do something like that to somebody that wouldn’t hurt a fly. She wasn’t that type of person. She wouldn’t hurt nobody,” Ebony Williams said of Sylvester.

“I didn’t have family when I came here. She became my sister. To see her go feels unreal, but we’re here to support her and keep her spirit alive.”

Original story:  The identity of the woman found dead inside a Breaux Bridge home on Friday has been identified by police.

Lateisha Sylvester, 36, was found dead inside the home located on Sidney Drive near Wild Cherry Lane, according to a spokesman for the Breaux Bridge Police Department.

Jatyran Sylvester, 26,  was arrested and booked into jail with second-degree murder.