Formal charges have been filed against the man accused of burning three African-American churches.

Holden Matthews, the 21-year-old white son of a St. Landry Parish Sheriff’s deputy, was formally charged with two counts simple arson, one count aggravated arson and three counts hate crimes. His attorney entered a not guilty plea, as is required in an arraignment.

The St. Landry Parish District Attorney is prosecuting the case. The DA filed a motion asking that bail be denied, stating that Matthews is “an imminent danger” and should be held without bail until his trial.

Matthews was formally charged during a bail hearing Monday morning; he wasn’t physically present but attended “via television,” the minutes of the hearing state.

The DA, represented by Charles Cravins and Glenn Marcantel, presented the judge with the Bill of Information, as well as a probable cause affidavit and a screenshot of a Facebook post. KATC Investigates obtained the affidavit last week. To read that story, click here.

The Facebook page entered into evidence was a screen shot of a post made in a private group, Black Metal Artists. The post states “choose your class,” and the options visible are Wizard, Fighter, Sniper, Assassin, Guardian and Warrior.  There’s a screen shot of a post from a Facebook account named Holden Matthews posted “i’ll take the arson/assassin/bard,” but it’s not clear if that post was on the Black Metal Arists post or not. There’s a photo included in his post of Matthews holding some kind of blades crossed over his chest.

A review of the page’s posts shows repeated anti-Christian references, including a parody of a musician cutting the throat of a Catholic nun. Louisiana’s hate crimes law adds five years to each sentence for any crime that a jury or judge finds was spurred by hate of “actual or perceived race, age, gender, religion, color, creed, disability, sexual orientation, national origin, or ancestry of that person or the owner or occupant of that property or because of actual or perceived membership or service in, or employment with, an organization.”

Last week, CNN reported that four days before his arrest in connection with the three Louisiana Baptist church fires, Matthews expressed disgust with Baptist beliefs on Facebook. Responding to a post about “afrikan spirituality,” Matthews, posting under the name Noctis Matthews, said he cannot “stand all these baptists around here, bunch of brainwashed people trying to find happiness in a religion that was forced on their ancestors just as it was on mine.”  In the posting, Matthews also said he wished that, “more blacks [sic] people would look into ancient beliefs of pre Christian Africa.”

Here’s a copy of the group page, and of Matthews’ alleged comment about arson and assassination, which were entered into evidence at today’s hearing: 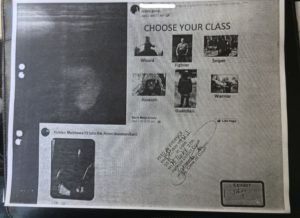 The only witness to testify during the hearing was state Fire Marshal Butch Browning.

Our media partners at The Advocate reported that Browning testified that digital evidence was a key new element introduced Monday. Browning said agents found copies of news reports discussing the fire on Matthews’ cell phone that he altered to take responsibility for the crimes, the Advocate reports.

“He superimposed himself on these news reports claiming responsibility for these fires,” he said.

Photos and videos from the churches were also pulled from Matthews’ cell phone. They were taken at the scenes of the three fires as the fires were starting and before and after emergency responders were on scene, the Advocate reports.

Photos also show Matthews returned to the scenes of the fires days later, when the churches were reduced to rubble, Browning testified. The Advocate reports that Browning testified investigators found a roughly 10 second video of Matthews discussing church fires in St. Landry Parish with a friend. Matthews said gasoline was the best method to use to burn a church. Time stamps from the video indicated it was taken before the fires were committed, Browning said.

At today’s hearing, the judge decided that, since the case is still under investigation by the FBI and the ATF, he would deny bail for Matthews. The defense objected to this finding, the minutes indicate.

The Associated Press reported the following from the hearing:

“We felt that he was an immediate risk to public safety,” said Louisiana Fire Marshal Butch Browning. “In my mind, I felt another fire was imminent.”

Testifying in court, Browning outlined a litany of evidence, including some new details of the investigation, that he said tied Matthews to the crime, including images on Matthews’ cell phone in which Browning said he “claimed responsibility” for torching the three black churches over 10 days.

Matthews, shackled and wearing an orange prison jumpsuit, never spoke to the court during the hearing, letting his court-appointed lawyer enter the not guilty plea for him. His parents watched their son’s appearance on video conference from the courtroom, his dad repeatedly wringing his hands and, at one point, leaving the room in tears.

To read our story about the affidavit filed at the time of Matthews’ arrest, which includes details about the investigation, click here.